It was only a couple of weeks ago but it had passed me by. George Monbiot‘s speech to the Climate Change March in London is definitely worth a read. Over the last few months, judging by his articles in the Guardian, his peak oil awareness has been developing exponentially. In his speech he directly links peak oil and climate change and sets out the severity of the challenge we face.

>”I don’t have to remind you of the two forces which are converging on our lives. We are faced with an impending shortage of the source of energy which is hardest to replace – liquid fossil fuels. And we are faced with the environmental consequences of the fossil fuel burning which has permitted us to be standing here now. The structure, the complexity, the diversity of our lives, everything we know, everything that we have taken for granted, that looked solid and non-negotiable, suddenly looks contingent. All this is a great tottering pile balanced on a ball, a ball that is about to start rolling downhill”. 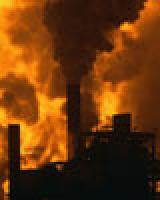 His closing words were particularly powerful, reminding us that this is as much of an internal issue as an external political issue.

>We cannot call on others to stop flying if we still fly. We cannot ask the government to force us to change if we are not ready to change. The greatest fight of our lives will be fought not just out there, but also in here”.