Half Gone – by Jeremy Leggett – a Review.

This is one of the first UK peak oil books, and follows on the heels of Paul Mobbs’ indispensible ‘Energy Beyond Oil’. Jeremy Leggett has been involved in campaigning on climate change for many years, much of which is documented in his previous book “The Carbon War”. Coming from a background in the oil industry, he taught geology for a while and then became Chief Scientist at Greenpeace. His involvement in the climate change negotiations that led to the Kyoto Agreement led to his setting up Solar Century, one of the biggest UK companies promoting renewables, especially photovoltaics. He is the ideal person to write a book on peak oil, climate change and what we do about them.

‘Half Gone’ is his contribution to the peak oil literature, and it is very welcome. He begins with a history of the world up to now, giving an overview of the growth of our addiction to fossil fuels. It is written in the style of someone in the future looking back at the history of humanity. He then looks at oil, how it forms, and his own experience as a petroleum geologist of finding and extracting it. This leads into a discussion about oil peak, and the different schools of thought as to when it might come. He divides opinion into two camps, the ‘early toppers’ and the ‘late toppers’. He explores both arguments but it is clear that his sympathies lie with early toppers such as Colin Campbell. He also assesses the state of health of the oil industry after decades of lack of investment in infrastructure, concluding “stated simply, it seems that even if an early topping point doesn’t hit us, the results of two decades of negligence in investment in infrastructure and exploration will”.

He then examines climate change, the nature of the problem and also the history of attempts to create international agreements for sorting it out. His style of writing is friendly and chatty, and occasionally goes into little autobiographical pieces, flashing back to his life during the first oil crisis in the 1970s, or to climate change meetings in the early 1990s. He used this technique also in ‘The Carbon War’, and I felt he uses it to lesser effect in this , although it was still useful. There are many peak oil and climate change books around these days, what is unique about this one? Firstly his linking of the two issues, which hasn’t really happened yet in the peak oil literature. He does this very ably and portrays them as being two aspects of the same problem. Secondly the accessibility of his writing, which offers a very concise and readable summary of the issues for the lay reader.

He then goes on to look at what we can do about it. This is really the meat of the book, so it is slightly disappointing that it only comprises the last 20% of it. Leggett’s tone is upbeat and positive. We can change our economy to run on renewables, we just have to collectively decide to do it. Creating increased demand will lead to increased manufacturing and cheaper prices. The technology is here and is ready to roll. History provides a number of examples of how quickly new technologies can be rolled out, for example the car in the US, he says, which saw an exponential growth in ownership over a very short period.

He argues that nuclear power is a non-starter, it won’t come on stream in time to be any kind of an effective response to peak oil, and, he writes, “even if nuclear power is truly a low-carbon technology, there is no point in having it if you don’t need it in the first place because far more attractive options are available”. Indeed, a combination of renewables makes sense he argues, and it is perfectly feasible. He points to some research by Amory Lovins at the Rocky Mountain Institute (seen by some as a notorious green-tech optimist) who wrote that, based on his research, “it will cost *less* to displace all the oil the United States now uses than it will cost to *buy* that oil”, a very interesting way of looking at the problem. 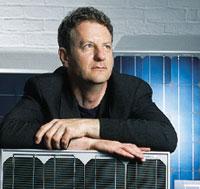 This leads to what for me is the weak point of the book. He talks very little of conservation and of the need to reduce consumption, both of energy and of everything else. His message is trying to reassure people that we can carry on living as we are living, just substituting renewables for fossil fuels. My sense is that the challenge goes deeper than that. For example, he writes, “it is all very well heating and electrifying buildings, but how are we going to get around in this brave new world? Once again we are not stumped for options, only the imagination to see them and the will to make the changes”.

He doesn’t question whether or not we actually need so many cars on the road, or whether our transportation infrastructure is necessary, he just takes it as read that we need it and looks at how we will power it. He proposes biodiesel as the main option, but doesn’t address issues of where this will come from. Will we import it from countries such as Borneo who are frantically tearing down old growth forest to plant palms for biodiesel export production, or will we grow it here, where even committing every acre of arable land to growing biodiesel would only power one-third of our cars? He talks about how Ford have created a car called the Model U with its “oil made from sunflower seeds and seats made from soyabeans”. He doesn’t say what the rest of the car is made from, presumably not local Western Red Cedar laths and clay daub. If we have sunflower seeds, surely it is more responsible to eat them than to make them into fuel?

His thoughts on energy for homes and business are more interesting. The picture he paints of localised grids and combinations of renewables is clear and realisable, as has also been spelt out in recent reports by Greenpeace and New Economics Foundation. Photovoltaics, for example, are, he says, becoming 5% cheaper each year, and will soon outcompete oil. “They can become very big very quick” he argues. I admire his optimism, and agree that if we really decided to go for it we could put in a lot of renewable infrastructure quite fast.

Where I disagree with this book is its belief that the transition to a renewable economy won’t end up affecting every other aspect of our lives. He doesn’t talk about food, medicine, building materials, where they will all come from, and how they will be produced in his renewable world. He doesn’t look at the fact that at the moment our energy use and greenhouse emissions are unrealistically low because most of the things we consume are made overseas, mostly in China, and that peak oil will necessitate that we can no longer depend on that. Could we power this expanded manufacturing base with renewables too? My sense is that oil depletion will be of a scale that we can, through a vigorous and urgent programme of renewables and conservation, put in place the infrastructure to power a localised economy, with reduced consumption, local manufacturing and food production, and a localised economy. The idea that we can, without changing anything else, continue the status quo running on renewables is profoundly naive. He is clear about the dangers of doing nothing, that nuclear will reappear (already on the cards), and we will do daft things like making petrol out of coal (possibly the most climatically destructive thing we could possibly do).

Leggett does attach caveats to his optimism though. Although with determined effort we can create a renewable economy, he adds “if the oil topping point (his term for oil peak) happens this decade … we are in trouble”. Seeing as the most reliable predictions fall between 2007 and 2010, then, really we are ‘in trouble’. In this event, he paints a scenario of society experiencing a kind of collapse before building back up to renewables. He talks of building lots of new off the grid zero CO2 buildings, but doesn’t say much about what we’ll do with all the buildings we have already.

I enjoyed ‘Half Gone’. It gives a clear sense of the problems we face, and an upbeat assessment of the solutions that might ease our way through them. Whether you agree with Leggett’s belief in technology’s ability to build a sustainable tomorrow, or feel that the changes to our ways of living will go much deeper than he suggests, you will find this book useful. He does a great job of setting out how climate change and peak oil, rather than being two separate problems, are both part of the same problem. Formulating successful strategies for dealing with both requires this more holistic approach.

if you could recommend one book about peak oil, energy descent, post-peak living, etc, which one would it be? my criteria are:

– i already know about the issues around climate change but would like to know more in-depth stuff on peak oil,

– i don’t need convincing of the need to change, but i want to hear some solid radical ideas on what/how we change, etc.

it doesn’t have to be a book – any pointers to good articles, pamphlets, etc would be much appreicated.

there seems to be a lot around on the web, it’s just hard knowing which is the good stuff and where to start!

For me I would say either Richard Heinberg’s “The Party’s Over’, Paul Mobbs’ ‘Energy Beyond Oil’ (especially good for what do we do about it in the UK stuff) or Colin Campbell’s ‘Oil Crisis’, which is more autobiographical but is extremely informative. There are some very good links to articles [here](http://www.powerswitch.org.uk/portal/index.php?option=content&task=view&id=329“PS”), and the [Hirsch Report](http://www.hilltoplancers.org/stories/hirsch0502.pdf“Hirs h”) is essential too. There is also an excellent article [here](http://www.energybulletin.net/2544.html“Oil”).

That would be a good starting place anyway.
Rob

I enjoyed the book and agree with most of your analysis. I wouldn’t be so harsh on his generally upbeat views on solutions, though, for two reasons.

(1) Gerald Rattner was famous in the nineties as the Chief Executive who destroyed his successful business overnight after describing its products as “rubbish”. Leggett owns a renewables company and you can’t expect him to say “prospects are rubbish”. You could regard him therefore as compromised, but I think his book is sufficiently clear about the magnitude of the problem to set that aside.

I did find that his pursuit of popular appeal becomes a bit tiresome after a while – he should have let his examples mock his victims instead of adding his own mocking commentary on top.

Also, the whole Blue Pearl prologue is a misfire in my view – it isn’t very well written, and it makes it much harder to recommend the rest of the book (which is much better) to sceptical colleagues who will stop before the end of the prologue.