Kuwait – the tumbling house of cards… 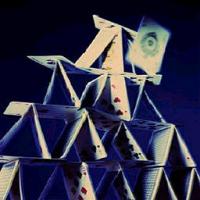 Last week Petroleum Intelligence Weekly reported a leak from within the **Kuwait Oil Company** which revealed that Kuwaiti oil reserves are actually around half what they have been reporting for the last 20 years, down from 99bn barrels to 48 bn barrels. While this should have been the biggest news story of 2006, and splashed across headlines around the world, it was reported by Reuters, but other than that barely made any of the papers I searched through for it. In a nutshell, overnight the world lost 5% of its total oil reserves, and that could just be the tip of the iceberg.

Colin Campbell at ASPO Ireland was already reporting fears about Kuwait’s inflated reserves in December ’05, in particular the troubled performance of its largest oil field, Burgan, in a piece called Kuwait Confession. Now it turns out he was right. The tricky thing with any estimates of when oil peak will occur is that we do not have the full data, due to countries and oil companies keeping their data to themselves. One of the most frequently referred-to examples as to why we can’t trust the official data is the revisions of reserves that took place among OPEC countries in the mid 1980s. In 1985, Kuwait revised its reserve estimates upwards by 50% overnight. It seems extraordinary, to suddenly overnight have twice as much oil reserves as you had the day before, but it went largely unchallenged. The reason was that the higher your reserves, the more you can pump, and the more you can pump the more revenue you can generate. Within months, the United Arab Emirates, Iran, and Iraq followed suit, and in 1988 Saudi Arabia became the last to join the revised reserve estimates party, adding a staggering 88bn barrels. You can read more about this in an article called How much oil do we really have? on the BBC website and you can see a table of these revisions produced by Colin Campbell here.

To add insult to injury, since then Kuwait still claims exactly the same reserve level as they had in 1985 despite pumping millions of barrels every day since. Now, whether the ‘leak’ actually was a leak or not, the truer picture has emerged. Why now? It could be that with the US already in Iraq and ratcheting up the tension against Iran, Kuwait wants to make itself less of a potential target for US oil grabbing. Who knows. What this information does do is actually make Colin Campbell and ASPO’s figures for Kuwait of 55bn barrels seem optimistic.

So if Kuwait are now coming clean (whether voluntarily or not), what about the other OPEC countries. Could we be about to see the whole house of cards coming down? With no spare capacity in the world oil production system, with Russia tightening its grip on supply, the North Sea having peaked, the impacts of the US hurricanes, the recent Hemel Hempsted oil depot fire, supply is getting tighter and tighter and tighter. As it is, Skrebowski talks of peak in 2008, Campbell in 2010 and Deffeyes last year. The Kuwaiti revisions mean we can cross roughly 5% off global reserves, if the other OPEC countries follow suit, then we are well and truly over the peak already.

An excellent article on The Oil Drum sets out a far more detailed technical explanation of it all than I am qualified to give, and is well worth a read. The Kuwaiti revisions had an immediate effect on oil prices, Reuters reporting that Brent crude prices rose $2 after the Kuwait reserve report.

The Kuwaiti Oil Company has swung into denial mode, Gulf Daily News reporting Farouk Al Zanki, the chairman of state-run Kuwait Oil Company as saying “We are always evaluating our reserves. Up to now, they are set at 95 (billion barrels) … I don’t know who gave them (PIW) those figures, I have no idea, but I don’t think it’s 100 percent accurate.” **”I don’t think it’s 100 percent accurate”.** Read that sentence through slowly to yourself. Are you feeling reassured now?

Whether we are at the peak or near it, it is clear that we will not know until it has passed. It is impossible to stress the scale and the urgency of this challenge. Our options? Wait for the Government to do something? We can see from the actions of our leaders where their priorities lie, we would be foolish to expect them to leap to our rescue. Head for the hills and just look after ourselves? A shed of firewood and a garden of carrots will be an essential thing to have, but if you are the only person who has them, how sustainable is that? Wait for the local authority to respond? Well, certainly they will have a role, but at present they are as baffled and uneducated about this as the rest of us (with a few notable exceptions).

For me the only rational and human response to peak oil, and in particular to the Kuwaiti revisions and further possible revisions that may be in the pipeline, is to form citizens groups in our communities, whether urban or rural, and start designing community led responses to peak oil. Whether Energy Descent Action Planning is the model adopted or not, what is needed is a local level emergency action plan, which then local authorities and even national government can get involved in (while local authorities won’t have peak oil plans, they will have other things you can draw from and connect up to). Local food, local energy, local currencies (see yesterday’s post for possible models for how to integrate these). We have been lied to and have been content to bimble along in what Kunstler calls ‘the consensus trance’. Now it appears that the first cards in the house of cards are starting to tumble, and we can no longer fool ourselves that business as usual is any kind of option.

How come fanatic mullahs are provoking west for war

Our dependence on oil have given the Mullahs a stage and the power to make themselves heard. They do not share our world view but oil and globalism have bought us together. Our policy has often been self serving and benefited only the elite in the exporting countries. It is widely believed that America will assert greater control over the region’s oil reserves regardless of a nations policies, so some leaders may see nothing to lose but their honor. Others are playing to a more complex endgame than we generally understand. Iran has more allies than Iraq had, for example. Meanwhile these people see their resources as being squandered by a comparatively extravagant West. Meanwhile our leaders do what they can to keep fuel prices down and attempt to spread democracy while securing access to resources. This rates well with voters, but does little to solve the underlying problems.

We are us much to blame as anyone for inching toward conflict. We are not broad thinkers as a culture. Even as our automotive sector is contracting, for example, it parades a new product line dependent on sexy v-8’s rather than efficiency and utility. We’ve had years to access the situation and adjust policy to make us less dependent on oil. Nobody understands the realities better than the current administration, but they have not promoted innovation. The money invested in war could have helped us adapt and reinvent our infrastructure at home instead. But we’ve been unable to identify a replacement that assures sustained economic growth. The current administration has committed us to a course of oil dependence in a contracting market and that means increased conflict. Our choice.

Even if it is hard to see, our collective sense of entitlement to cheap energy and economic growth comes at some expense to other nations. The religious aspects of the cultures can be counted on to polarize viewpoints further on both sides. We seem to be getting more extreme here on our own shores already. Its all very complex and their are lots of nasty personalities involved, but let’s try not lose site of our own rigid mindset and resulting complicity.