Allan Jones is a bit of a hero of mine. I was very excited about hearing him speak and he provided a very interesting talk. He is the Chief Development Officer of the London Climate Change Agency. He is also the guy who set up the UK’s first ESCO and did such amazing work in Woking with decentralized energy systems. Allan Jones has been headhunted by Ken Livingston to achieve a Zero Carbon London, and listening to the no-nonsense way he speaks, you’d think he might actually pull it off.

When he was in Woking he managed to cut the Council’s carbon emissions by 77%, and save them money. In 3 years he installed a very impressive amount of photovoltaics, 10% of all the PVs in the UK are in Woking. You can read more about his work there in an essential article called Woking – Energy Services for the New Millenium. He talked about what the price of electricity bought from the grid includes. The actual price of the electricity is a small part of the price, it also includes transmission losses, distribution losses, TUOS and DUOS (I forget what they are but it might mean something to you…), various taxes and levies (as in charges, not the thing you drive your Chevvy to), and VAT. Your electricity bill also funds the running of OFWAT and OFGEN. The problem Jones identified a few years ago was that this system doesn’t encourage renewables, which find it very hard to operate in that system.

The way he got round it was to set up private wire grids, which cost a bit more to set up, but which don’t include all the other costs aside from VAT. It meant that he was able to provide energy at the same prices, but from decentralized energy systems.

He is now in the process of setting up a London-wide ESCO, which will have a 20% shareholding, or which 19% is public sector funding and 81% is private sector finance, and 80% loan finance. 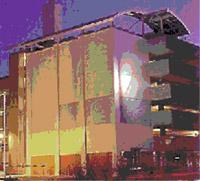 The systems he is putting in are ‘trigeneration’, that is they provide heating, cooling and electricity. He also talked about how this can become ‘quadgeneration’, because when you integrate hydrogen fuel cells, the byproduct is water, so you can have an energy plant also producing water. He had great pictures of renewable energy lampposts, with PVs on and a windturbine at the top that he wants to bring in all over London. They would generate a significant amount of power. There are also plans for an offshore wind farm near London that would generate 25% of London’s power. He talked out using biomass in anaerobic digestors, marine current turbines, and using e-coli viruses to make hydrogen (he lost me a bit there…).

I remain somewhat skeptical about the hydrogen economy, and whether London can in fact become a zero-carbon city, never mind a post-peak city. My sense is, like the man who introduced the hydrogen bus fleet in a city in Australia who appears in ‘Real Oil Crisis’, that Jones has arrived about 15 years too late for business-as-usual to be any kind of an option. If it is possible to turn London around, Jones is that man who can do it. He is clearly a man who makes things happen. I hope he still has the time.