« Transition Town Totnes gets off to a great start!
The Tupperware Approach to Relocalisation. »

**Here is an edited transcript of the talk that Chris Johnstone gave at the launch of Transition Town Totnes at Totnes Civic Hall on 6th September 2006.** 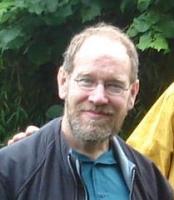 Although there is a practical side to energy descent, what I want to look at is the psychological side to energy descent. I’m going to talk for a short while, and then I’m going to introduce a process where you talk to each other, because you’re the people of Totnes, you’re going to be involved in this, and therefore it’s really important that you hear from each other what you think and feel about this. I’m going to offer a structured process that will last about 20 minutes and then we’ll have some time for questions at the end.

I’m going to start with the question, “how do we build motivation and energy for change?” I work as an addictions specialist in Bristol and I’m going to be introducing some ideas from the addictions field. I’ve also been involved in looking at the psychology of cultivating empowered responses to global issues, that’s been my pet field for the last 20 years. It’s also a topic that I cover in my book, ‘Find Your Power’. I’m drawing from the addictions field because there’s something similar going on; in addictions there is an attraction to something that is appealing in the short term, but which creates problems in the long term. With our dependence on oil, we have something very similar. There are a lot of short-term gains, but long-term costs. The long-term cost everyone here probably knows a lot about already is climate change.

Climate change is a toxic effect of high consumption of oil and other fossil fuels. I think that with climate change, a lot of people think of it as a distant issue, that is out there and won’t affect them. I teach medical students at Bristol University about health and the environment, and often students say “climate change probably won’t effect me”. Well, we know that with peak oil the story changes. Peak oil is going to affect all of us in our lifetimes. The responses, however, are very similar. The responses are about reducing our dependence on fossil fuels.

But before the thinking stage, there’s another stage where you’re not even thinking about it, and that’s known as the Pre-Contemplation Stage. Probably when it comes to energy descent, the majority of the population in this country are in the Pre-Contemplation stage. They are not even thinking about it. In fact, when they put the price of oil up, there are huge protests. Matt Simmons, who writes a lot on peak oil, reckons that if we are going to be really serious about peak oil we should charge four times as much for it, because that would slow down consumption in such a way that we could actually have more of a planned descent rather than just running out because we use it up too quickly.

What I found was that when I first started finding out about peak oil, it got me thinking, but I wasn’t really sure what to do about it much until I came across Rob’s work. What’s important about Rob’s work is that he builds in a Preparation Stage. The Preparation Stage is what happens when you have thought about something, and then you think “right, I’m going to do something about it”. There is an important empowerment principle here, which is “*what* comes before *how*”. If you’re really concerned about an issue, and make the decision: “I want to do something about it”, then you start the process of looking for a way. That is the Preparation Stage. Sometimes when people can’t see how to respond to something, like “I’m concerned about climate change, and I don’t know what to do”, they give up at that point.

I was reading something in Newsweek on the web, which said “we can’t do much about climate change, it’s an engineering problem”. This idea that it can be sorted out by the United Nations or by specialists, by people ‘out there’, distances the problem and leaves us feeling there’s little we can do. What an Energy Descent Plan does is bring it back to home; it looks at the changes we can make here, now. So a Preparation Stage is when you say what comes before how, you know what you want to do, if you can’t see what to do, rather than giving up, start looking for a way. That’s what’s needed now.

There are huge changes that are going to happen. It’s not a question of building motivation for change in a way that it’s a choice… I mean change is going to happen anyway. The question is whether we start being ahead of the game, and actually start adapting before the price of oil starts going through the roof, before oil becomes more difficult to get hold of, or supermarkets have problems stocking their shelves. If we can adapt before that happens, then we’re in a much better position to adapt to the changes rather than being defeated by those changes.

So, in terms of this process, Pre-Contemplation is not even thinking about it, Contemplation is thinking about change, and Preparation is when you make the decision, you cross the threshold, of deciding “yes I want to do something about this”. Then when you find yourself ready, willing and able, key words that are often used in the addictions field, then you step into action.

Totnes has an opportunity here to be ground breaking internationally. Rob and I have been talking about this idea of The Great Turning, that maybe in 400 years time, if humanity finds a way through, maybe they will look back at this time at the beginning of the 21st century as a crucial time, as the last decades of the Oil Age. Maybe they will tell stories about what happened in Totnes. Maybe this evening will be something that is the beginning of one of those stories. If you look ahead at the future, there are gloomy possibilities, but there are also inspiring possibilities, and you are part of an inspiring possibility by being here tonight.

What I’d like to do is to offer some tools, because what I’m aware of is that all of you here tonight are the leading edge of Totnes. I know that Totnes has a far higher level of ecological awareness than most other parts of the country, but there will be people in Totnes who have never heard of peak oil, people in Totnes who have never heard of energy descent plans, and some of you here will not have heard of it before tonight too. So you have a role to play, to become infectious about this idea if it is going to happen. What I’d like to look at is how do you make that happen, how do you become infectious for change, particularly because at any of the Stages of Change blocks can happen.

Blocks can happen between pre-contemplation and contemplation. One of the things that happens with climate change is that people who are not thinking about it see a television programme about it and think “oh God, that’s too depressing, I don’t want to think about that…”, how many people here have felt that or witnessed that in other people? (Most hands go up). Yes, it’s a common response. Certainly the research in health psychology shows that high fear messages can switch people off. When they’ve done research on dental hygiene or on smoking, they’ve shown that high fear messages get noticed, but sometimes people blank out to them, particularly if they already have high levels of anxiety.

In my work in the addictions field I often give high fear messages. I tell people “if you carry on drinking you’re going to die

I am thrilled to see this whole project out here on the web for all to see and learn from. it’s like a ring side seat for us before and while we start similar processes in our own towns. Mine is Burlington ON Canada. I am solo at this point, with many resources, but no team in place. The people who should be, a citizen’s advisory committee on Sustainable Development at city hall are definitely in the pre-contemplation stage, if not denial. They want to limit themselves to helping people have healthy green lawns and stuff some insulation in their attics. I’m on that committee and have decided that citizen action is where it’s at, so I’ve started Sustainable Burlington using the Postcarbon Institute’s help. We’re going to be public too at http://www.relocalize.net/groups/burlingtonCan.