« Transition Culture’s Most Amazing Competition Ever! Win a Place on the Life After Oil Course!!
Energy: use less, save more by John Clift & Amanda Cuthbert. A Review and a Chance to Win a Copy! »

Reflections on my Trip to Jersey.

I just spent a very enjoyable couple of days on the island of Jersey, at the invitation of the Jersey National Trust, Jersey Slow Food and the Jersey Organic Association, taking the message of energy descent and powerdown to the island. Jersey is home to about 90,000 people on a beautiful island near the French coast. My trip was organised by Alasdair Crosby, a reporter from the Jersey Evening Post and founder of Jersey Slow Food. 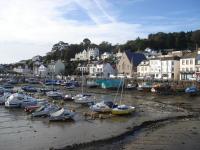 I arrived by plane from Exeter, a historic (for me anyway) trip, it being my last plane flight, my having decided not to fly any more some months ago (this trip had been arranged before that decision was made). I was met by Alasdair at the airport, and then had supper with him and representatives of the other groups behind the invitation. Alasdair had my visit to Jersey organised with military precision, I was given a very detailed itinerary for the time I was there.

On Wednesday morning I was in the studios of BBC Radio Jersey by 8.30, and did a 10 minute interview on peak oil and on the challenges it presents to the island on their morning news programme, making the point that if the island is able to engage with the challenge of peak oil, it presents the opportunity for a historic and ultimately positive transition.

I then had a meeting with Chris Newton, the Director of the Environment Department on Jersey. We discussed the island’s emerging energy policy, a draft report that explores the energy options for the island. Chris clearly has a good handle on the energy challenges facing Jersey, and has been looking in detail at some of the options it has. As an island with a long coastline, the potential for tidal power is great. The report will be followed by an energy audit for the island, to which I suggested a food and medicine audit may well prove useful. There seemed to be a lot of interest in exploring the challenge, but much less enthusiasm for responses such as traffic management, and grants for microrenewables and conservation. The feeling seems to be that the market will deal with this, which I don’t see borne out anywhere else. It was very interesting to see how decision makers such as Chris are attempting to deal with this challenge, and while a lot of effort is going into evaluating the island’s energy options, I didn’t detect a sense of urgency correspondent to the scale of the challenge.

I then went to the offices of the Jersey Evening Post to meet Alasdair to do an interview with him for the paper, which should be in the paper some time next week. I’ll post it here at **Transition Culture** when it is done. Then it was off to Jersey College for Girls, where I met my host Tom Fallon, one of the teachers in the school. The school has a strong environmental programme, and next week has a visit from the island’s environment minister. I gave a 15 minute presentation to a school assembly of 700 girls, introducing the idea of peak oil and the need to respond to it. My slide of Wallace and Gromit as a model of post-peak living went down well! 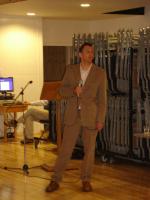 I then had a few hours off, to check emails in the nearby internet café, and have a bit of a wander around. At 7.30 I was back at the Jersey College for Girls for the main part of my visit, an evening talk entitled “The Future of Local Food Production

When we made enquiries about eco-housing on Jersey we were told that the land-use is very strictly controlled (more so than the UK) so changing land use there is tricky. Jersey is very heavily regulated.

Much of the island is sparsely populated and still agricultural; St Helier being the notable exception with lots of “modern” flats, offices and leisure complexes being built. Plus the occasional 1960s tower blocks.

They used to use seaweed for fertiliser but I believe this is now banned due to it containing low levels of radioactivity from France’s nuclear programme.

A huge problem is the number of vehicles (100000) – if you ever get the chance to travel to some beautiful small islands approximately 5 miles off the north coast of Jersey called the Ecrehou – when you land on them and look back you can actually see a smog cloud created by all these vehicles. Jersey used to have two railways running to the west and east of the island – I believe new radical thinking is needed to consider reinstating these along with an imaginative and bold transport policy. We need to cut down on needless car journeys, especially the large number of 4×4 vehicles ‘Chelsea Tractors’ often used by parents to make short journeys on the school run.

A very interesting article. Jersey seems in some ways, an exaggerated microcosm of Britain, in that most of its income comes from high value exports and intangible foreign earnings. It also imports most of its food and other basic products and has a population which is mostly used to high earnings and sedentary occupations. In that context, the comments made about possible future means of food production and sustainability, merit some comment. They have implications not just for Jersey but for Britain and other “developed

It’s an interesting situation. I think because a Jersey is a wealthy place they are actually less inclined to act, believing that their wealth will be a cushion or barrier to peak oil effects, just like it was on the Titanic. Unfortunately the economic repercussion are pretty unpredictable.

I think the population of Jersey will probably decided to move elsewhere if the costs are too high and they realise this before their money becomes useless and in 50 years time perhaps the population will be back to 10,000 again.

It is true that many of the (on average) very wealthy population of Jersey could decamp elsewhere if things got desperate. This is an option not available to the millions of British who will find themselves in a fairly similar situation. Which is why education initiatives are so desperately needed – surviving peak oil in comparative comfort is easy if you know how and have the determination to do so, rather difficult if you don’t have the knowledge.

Thanks Rob for a thought provoking essay.
And also your humour and humanity.

Jersey shifting from a society with employment mostly as bankers, finanical advisors and tax-dodging investors to a more labour-intensive agricultural economy will be a challenge.

In the transition, for those interested in the security, health benefits, enjoyment and bloody-minded righteousness of growing their own organic fruit and veg, but don’t have the time to do the work, see an example of an organic grower being paid to use other people’s land:
http://www.growbiointensive.org/biointensive/goldmine.html#goldmine

Anyway, Jersey is an interesting case study for considering an Energy Dissent Plan. This is not just in relation to the consumption of oil as a direct energy source. As an island dependent on electricity from French nuclear power stations, it also potentially highlights the indirect oil dependence of nuclear energy generation – eg just for starters through mining, processing and distribution of uranium. (leaving aside all the other, I believe prohibitively negative impacts of the nuclear industry, from the fact that it is also a finite and exhaustible mineral resource, to the dnagers of its waste products.)

Robert Morgan makes some interesting observations on my quick calculations on food sustainability in Jersey. It is not atypical of agrarian economies to have half the population working in agriculture – I have seen figures as high as 70%.

A key reason for doing the rough calculations was to demonstrate the fallacy of the widely known ‘fact’ in Jersey that we simply cannot grow our own food. There is good reason for this belief. The experience of the occupation 1940-1945 when imports were all but non-existent showed that supporting a 50,000 population was not really sustainable with the technology and techniques available then.

However that was an unplanned event. Although agriculture at that point was a major activity in the island, it was significantly geared to exporting potatoes and tomatoes. At that point too horses were still comonplace on farms, and it takes a couple of vergees (say an acre) of good land to feed a horse. It’s a tough decision – feed a horse or feed 10 people on the same area of land.

As it happens I have been making some refinements to my calculation to deal with new information. For example my original figures used a typical calorie requirement for modern westerners. However I read recently that in the 16th century land labourers had a calorie intake closer to modern olympic athletes. That shouldn’t be a big suprise given the sheer physicality of the work. However it does mean that if you use human labour you have to grow perhaps 25% more food. It just goes to show how sensitive all these models are to basic assumptions.

Of course there are a host of other awkward questions. To mention just a few:

Are wealthy people with large ornimental gardens and lawns really going to let others turn them into veg plots?

What proportion of islanders (British as well as Jersey!) would be up to the task in terms of knowledge when most people under 40 have never grown a food item in their lives, except perhaps a few tomato plants? Education would be essential and it would be difficult to see more a than a few percent taking it up in a big way until a crisis really hit. These few percent (compared to the current few tenths of a percent) would be the pioneers, the people we need to reach and teach, who after honing their skills would lead others.

There is a big difference physically and psychologically between growing a few summer veg as a hobby and to save a few pounds, and growing the range and amounts of food to feed your family for the whole year when the difference between success and failure could mean starvation. Some individuals would inevitably fail in some years and strong communities such as those being built by Rob would be essential to prevent social breakdown, if not anarchy.

It was fantastic to see such good attendance. We’d been to a screening of End of Surburbia at St Johns parish hall that attracted far fewer.. but was a good beginning. Our response to the film was to set up http://www.sustainablejersey.org. We would like to look into the matchmaking garden scheme you mentioned. There are big issues of social inequality in Jersey. There are many children without access to outside space…besides the growing potential. Many landowners have fields as well as gardens. Are there contractual precedents/internet examples you could sign post? Any guidance gladly received.

Two and a half years on and progress is very slow. To get some idea of the struggle here, read
http://st-ouennais.livejournal.com/48216.html

On the good side the elections last November resulted in a few good deputies getting elected to the States, and we now have an active Jersey Climate Action Group, which also covers peak oil. There is positive movement but sadly we are still a long way from being a Transition Island.