Showing results 1 - 5 of 12 for the category: Population.

Cereals, agroforestry and droughts: an interview with Martin Crawford 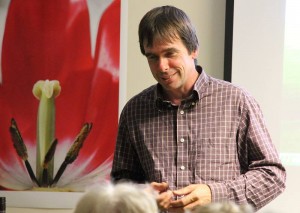 Martin Crawford recently launching his book 'Creating a Forest Garden', at the Eden Project in Cornwall.

Last week I cycled round to Martin Crawford’s house to interview him.  Martin runs the Agroforestry Research Trust, is one of the world’s authorities on the subject, and recently published ‘Creating a Forest Garden‘.  I had wanted to ask him about the drought in the southeast and the implications for the future of farming.  On the day I visited Martin though it was pouring with rain, but as you’ll see, that made little difference to his thoughts on the matter.  I have included a couple of films about his work as well, mixed in with the interview.

Something for the weekend… Richard Heinberg in Totnes

A week ago today, Richard Heinberg gave a stunning talk in Totnes on ‘The End of Growth’.  Thanks to our dear friends at nuproject, I can now unveil the film of his talk.  Enjoy… .

What it Looks Like When Transition Meets Climate Activism….

Here is a fascinating short film about Transition Heathrow, which has emerged from the proposed (and now scrapped) Third Runway at Heathrow Airport, and is now focused around a community garden project called ‘Grow Heathrow’, a wonderful reclaiming of a derelict market garden site.  It will hopefully spark an interesting discussion here about how Transition and activism come together … thanks to the JustDoIt people for making the film…

An Interview with Shaun Chamberlin, author of ‘The Transition Timeline’

So Shaun, you’ve just got copies of the first book you’ve ever published in your hand. What does that feel like?

Wow, what a question! Relief I think! It’s been a long process, and it feels so good to finally see the fruits of everyone’s labours that have gone into this book, and to feel that it can now go out and be a help to people. And I can’t get over how much I love the cover design – we spent ages getting it right, and I’m totally in love! I think it’ll be a while before it all sinks in. (Below is a short promotional film for the book produced by Green Books).

The Great Betrayal: why global recession means we can abandon Tibet

One of the most appalling betrayals in recent history slipped by unseen by most people in last week’s media.  The UK Government stated that Tibet has actually always been a part of China, and that it has no claim whatsoever to be viewed in anyway differently from the rest of China.  For the Tibetan people, who have suffered genocide, the suppression and erosion of their cultural and religious identity, huge population transfer, famine and police brutality, this is the final kick in the teeth, the final glimmer of hope snuffed out.  The fact that that the Olympics are over, and China can stop pretending again that it gives a toss what the rest of the world thinks about anything, coupled with Western governments’ decision that the way out of crippling recession is to spend, spend, spend in order to encourage us to spend, spend, spend, means that no-one needs Tibet. It is dispensible and can now officially crawl away and die slowly.  This is a disgusting betrayal.