« The Winner of Our Limerick Competition!
The Oil Depletion by Richard Heinberg – A Review and Competition! »

“What Happens When Oil is Gone?” – An Interview with Rob Hopkins from the Jersey Evening Post.

**What Will Happen When The Oil is Gone? by Alasdair Crosby. Printed in the Jersey Evening Post on Friday November 3rd.**

While I was in Jersey recently, I did an interview for the **Jersey Evening Post**, which appeared in the paper last Friday. Here it is, with thanks for permission to reproduce it here.

“In almost every part of our daily lives we rely on the ready supply of oil, but it is running out as a cheap form of energy. Environmentalist Rob Hopkins, who was in the Island recently, spoke to Alasdair Crosby about what life will be like when the barrels run dry.

We eat oil, every day. We also wear oil, and when we’re ill we treat ourselves with its derivatives. Virtually all of the processes in the modern food system are dependent upon this finite resource. Moreover, at a time when we are told we should be making massive cuts in the emissions of greenhouse gases in order to reduce the threat posed by climate change, food supply chains are becoming more transport-intensive. The food system is becoming a significant contributor to global warming – a subject not far from the headlines this week. 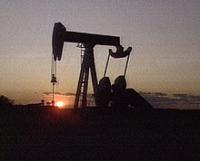 In Jersey, if there were any trouble with oil supplies, we would be in deep trouble, not only from the point of food security, or energy security, but also medicine security, or consumer goods security, or the security of any and every facet of what we consider to be our everyday life, and our inalienable right to enjoy everything that a free market can provide.
Speaking at a public lecture recently in Jersey, organised jointly by the National Trust for Jersey, the Jersey Organic Association, and the Jersey group of the Slow Food organisation, was environmentalist Rob Hopkins, who has made a close study of oil-related and energy-related subjects over the past few years, and is currently researching for a PhD at Plymouth University on ways in which local communities can mitigate and prepare themselves for what could be an extremely nasty shock – if we don’t come up with plans on to deal with it.

He told the audience of around 90: ‘We can look back at the Emperors of past civilisations and their lavish and luxurious life-styles, but all these civilisations were underpinned by the availability of cheap energy. The Romans used slave-power, but today we have the equivalent of 50 slaves working for each of us, night and day, producing the oil which keeps us in the style to which are accustomed. Every time we fill our car tanks, we use the equivalent of five years of human manual labour.’
But soon, sooner rather than later, the slaves will be gone, and we, the sybarites who enjoy a standard of living that would make the Emperors of old gnash their teeth in envy, will have to encounter life without our accustomed accessories and the cheap energy that enables us to afford them.

He is, of course, referring to the concept of Peak Oil. It is not that we are running out of oil, he says, but that we are running out of cheap oil. The big oil fields that we rely on these days were discovered in the 1940s to 1960s. The new discoveries have been in decline ever since. ‘Now we discover a fraction of what we used to find: we consume six barrels of oil for every one that we discover, despite having the most amazing new technological equipment. We can’t discover new supplies because they’re not there.

‘We are running out very quickly of the easy-to-get-at oil that’s on land. Soon, production quantities just won’t meet demand, and that will send the price of oil soaring.’ Once upon a time ‘Peak Oil’ was only a theory, and one that was on the far fringes of scientific respectability. Just like global warming. Dwindling oil supplies are not the only energy problem facing the world, said Mr Hopkins.

Asked to give some examples on how this might affect Jersey – although one doesn’t need much imagination to work that out for oneself – he mentioned particularly the issue of food security. The supermarkets have three days worth of supplies of food at any one time, and no back-up other than their just-in-time delivery system. In 2000 the UK was hours away from serious food shortages – think how Jersey would be affected if the supplies were to stop coming through.

The globalised trading system is powered by oil, and when that is in short supply, the system will grind to a halt, leaving Jersey bereft of everything from cheap food to ready-made clothes to cheap toilet seats. It sounds more than a little apocalyptic – is this not just the old fear of ‘The End Times are upon us’ dressed up in 21st Century clothes?

‘It could be dangerous, if we simply ignore the danger and carry on as we are, and there is indeed a danger of everything unravelling quite quickly. ‘But on the other hand it could be very positive, and lead to a re-localisation of life, and people re-learning old and forgotten skills – a renaissance for local food production and of a genuinely local community.’
In succession, Mr Hopkins dismissed alternatives to oil, including natural gas, which quadrupled in price last winter and which he expects to deplete even faster than oil once it peaks.

Coal as an alternative ‘would be fine if were no such thing as climate change’ added Mr Hopkins. ‘’If you ran your car on petrol extracted from coal, you would produce 40 per cent more carbon emissions than using normal petrol.’ And the ‘nuclear option’ was no option because we will also have to face ‘Peak Uranium’, with only 70 years supply left at current rates of usage.
‘I don’t think there is any way of avoiding the fact that we have to use less energy and the issue is not how do we keep everything going, but how do we change what we want and change how we live?’

Mr Hopkins, who until recently lived near Kinsale in Southern Ireland and ran permaculture courses in the local college of further education there, initiated with his students an idea that he called ‘Energy Descent Planning.’
‘We looked at the questions: what if the predictions about climate change and peak oil were to come true in the not too distant future?’

‘Together we teased out a vision of the sort of society in which we might want to live, and from there we back-cast to find out how we should get from where we are now to where we want to be. Our plan was adopted by the town council, put on the Internet, and there are now communities using it all over the world.’ Mr Hopkins now lives in Totnes in Devon, running an initiative titled Transition Town Totnes, which is aiming to produce a similar, but even more detailed plan for the future of that town.

‘Basically the core assumption of the process is that the response to the challenge can’t be imposed from outside, and not entirely from above. What we want to do is unlock the knowledge within the community, and the inspiration and the power within the community of people coming together to look at this question. ‘Peak Oil and climate change can be seen as a disaster we can’t escape – or we can pull together within our own communities, and they can say: “Lets do this, let’s sort it out, let’s pull together, and think imaginatively, and let’s get some new thinking going.’

Working locally in Pittsburgh. Participant in group recently formed “Energy Forum of Western Pennsylvania” with our first community forum presenting End of Suburbia”…..Posters brought in an audience of 80….we continue to work towards community localization effort….Transition Town Totnes formula is what we strive for….so anything to share is appreciated….k