« Film Review: Garbage Warrior
Having Lunch with the Food For Life Partnership »

Sometimes I pass things so ridiculous I have to go back again for a second look. The other day I was near Paignton, and I passed a zebra crossing and its attendant Belisha beacons (see right). Interesting fact for the day (or quite possibly not), Belisha beacons are named after Leslie Hore-Belisha (1895-1957), the Minister of Transport who introduced them in the 1930s. The idea of Belisha beacons is straightforward, a black and white stripey pole with a yellow flashing globe on top which shows people where to cross the road. The yellow flashing light has long been considered adequate in attracting attention and which in turn insinuates where the stripey pole is to be found (if anyone should be interested). This Belisha beacon near Paignton had come up with an ingenious, energy-wasting way of solving a problem that I never knew existed, lighting the pole up from within!

At a time when green groups are campaigning for companies and businesses to turn off their lights at night, and when some are proposing that at least every other streetlight could be turned off in order to save energy and reduce carbon emissions, some bright spark has come up with the idea of the Belisha beacon not just having a flashing top, but to be entirely illuminated. 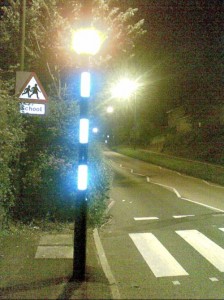 I have to confess to being at a loss to explain why anyone, in a Council Highways department anywhere, felt it necessary to redesign something that has always worked perfectly well until now. What next? Perhaps the logical next step is to light up all the white stripes of the zebra crossing so you don’t miss them too. In fact maybe they could light up as you step on them, like in the video of Michael Jackson’s ‘Billie Jean’. Clearly we are surrounded by endless absurd ways of wasting energy, many of which we have become so accustomed to that we don’t notice them anymore, but occasionally some rise to the surface, striking in their sheer pointlessness. I will try and investigate and find out the thinking behind this… the people should be told.

Oh my! Would be so funny if it wasn’t so stupid and wasteful. Let us know what happens!

Perhaps the lights will get rid of the excuses people use for racing through when there are pedestrians in the crossing. A lady was killed at one zebra crossing we use in Sidcup. We have had cars threaten to run us down at the same crossing (not slowing at all). I do I think CCTV cameras at zebra crossings may be a better use of energy, though.

Surely they are another outcome of Britain’s Health & Safety Obsession…to support more stupidity and the loss of common sense.
As you say Rob – no more bruised and broken noses ! Yay !

What a mad mad world…

It’s an evil plot by the headshrinkers as Thom Yorke observed in 1995 (My Iron Lung):

“The headshrinkers / They want everything / My uncle Bill / My Belisha beacon.” (via…)

These guys have an 8 watt LED belisha beacon – cool!

We actually have this!

It’s not the strips themselves that flash, but rather rows of fixtures embedded in the roadway on each side of the zebra crossing that contain yellow blinky lights.

They don’t flash all the time. They detect when a pedestrian steps off the curb and then blink for the next 20 seconds or so. It’s so distracting that I’m surprised it hasn’t caused an accident by now.

Yes but we need the bright lights so that we don’t walk in to them when we have our heads down and not looking where we’re going because we’re on our mobile phone talking to the person on the other side of the road. Just like when the council put soft sponge around the lamp posts. It all makes sense. I think they should also have some kind of alarm going off whenever we get within 2 meters of them.

Careful with you suggestion about the stripes. You never know.

On the point about street lighting, why are we not using more LEDs, as in Oakland (USA) for example:

As a regular road user on 2 of my own self powered wheels, I feel it prudent to add that it doesn’t matter how illuminated, bright or reflective something is, there will always who manages, often spectacularly (and possibly fatally), to miss it.

We should be turning off all the streetlights after 9pm (excepting perhaps town centres, and depending on the latitude). There are very few pedestrians late at night and vehicles have their own lights! But turning off the lights would be an attack on the ‘baseload’, the absurdity that we need to be able to generate huge amounts of electricity at 2 am.

I wonder what was wrong with just use reflective material for the stripes so that an approaching car’s headlights would illuminate the post? Seems silly to waste money on creating a pole that can light up, and then waste energy keeping it it.

Did it stay illuminated during the day too, or have they at least put a sensor in there to light it only when it is dark?

The crossings out here in the US that are not part of the traffic light system at an intersection don’t have the beacon poles, nor do they have the parking restrictions either side of them making them a lot more dangerous. As mentioned by Philip, the newer ones are installing flashing studs that are activated by somebody entering the crossing. Not sure how much value they add though to the safety of the crossing. The simple flashing beacon and preventing parking near the crossing would seem to be much more sensible.

Here in Alameda we do also use a lot of LED based lights (the city replaced all its traffic light bulbs with bright LED ones, resulting in a huge saving in energy as well as making them more reliable). Hopefully the councils over there are also using LED bulbs for traffic lights and crossing beacons now – it makes a big difference, and it is not that expensive anymore.

I wonder why on so many non-busy roads, pelican crossings are used by pedestrians in such a weird way?
No traffic within site for 200m each way, press the button, wait, see green man, walk across.
or:
Or light traffic (safe gap will appear in a few moments) press button, see gap, cross.
A few seconds later the lights turn red and a dozen vehicles each-way de-clutch, brake, stop (for nothing)then accelarate way.
Talk about ridiculous! It must happen hundreds of thousands of times a second across the US & UK, what a waste of fuel, of traffic flow, of time?

sumone should do sumthin to stop wasting it

Our grade is doing a test on energy and i reckon to much people are wastiong it why can’t we just save it and SAVE THE WHALES!(even though it has nothing to do with energy)