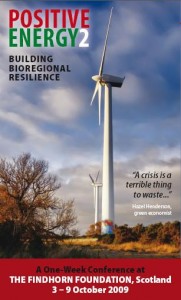 Regular readers will recall from last year my trip to the Positive Energy conference at Findhorn, an extraordinary few days which looked at many aspects of the work starting now in terms of building localised, bioregional infrastructure. Or you may just remember my son’s blog posts which mainly talked about the food, but were hopefully illuminating nonetheless.  Well, it was such a success that Findhorn are running a second Positive Energy event, to run between the 3rd and the 9th of October, and have just produced the first publicity for it, which you can download here.

They introduce it thus; “this is the first electronic flyer for the Positive Energy 2 conference. Further updated flyers may be sent to you as more speakers are added to the presenter roster. A hard copy version of the flyer will be published in around a month’s time. If you would like to receive one or more copies of this, please contact the principal conference organiser, Jonathan Dawson jonathan@gen-europe.org

In light of the major success of the Positive Energy 1 conference, you are strongly recommended to book early for this event, especially if you would like to be assured of accommodation in the heart of the Findhorn ecovillage where the event will be based. Please note that there is a discount for all bookings made before July 1, 2009.”

I am thrilled to be speaking at the conference, as well as the wonderful Richard Olivier, bioregional poet David Whyte, Judy Wicks from BALLE, and Peter Harper from CAT, as well as Caroline Lucas, Richard Heinberg and Pooran Desai of Bioregional via videolink.  Should be great.

Rob have you any plans afoot for an event that focused on Transition Towns, ecovillages and the interplay between them? i would be very interested. In many respects the ecovillages are the elders and the TT’s have made the bridge into mainstream. Both movements have a lot to learn from each other.