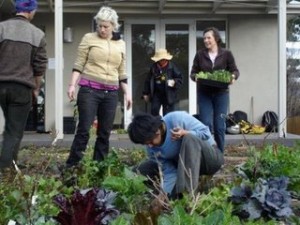 Here is the latest digest of Transition-related stories that I have picked up across the web over the last 4 weeks.  It offers an instructive and fascinating insight into where Transition has gone and what it is up to.  The diversity of projects is fascinating.  Apparently, Transition Town Exmouth’s “ranks have swelled to hundreds”, Transition Southport described as “environmentalists with a smile”, definitely a compliment in my book and Maple Ridge in Canada is considering ‘going Transition’.

Overseas, Transition Peterborough focus on green jobs, Transition Garopaba in Brazil are composting their food waste on a big scale, and Transition Town Montpelier in Vermont were one of the key groups behind the campaign to get the State House lawn turned into a foodgarden.

In the US, Common Ground magazine carries a great and detailed piece about Transition,  including interviews with Joanne  Poyourow and Jennifer Grey,and Transition Hohenwald deliver a Transition Proclamation to the County Lawmakers.  In Canada, someone in Port Alberni is inspired to set up a Transition initiative and Transition Town Peterborough in Ontario are planning a city-wide energy audit.  In Australia, Transition Town Eudlo have been permablitzing.  Finally, the Transition Housewife is getting excited about her boababs.

I must correct this post… that (great) pic is actually from Permablitz in Victoria, not Transition Town Eudlo. I love that photo and used it to demonstrate the start of Permablitzes here in Australia, but our pics are further down the post. I did say in the first par that it was from Vic. You can see the great work that Adam (one of the originators of the Energy Bulletin website) and Dan are doing in Victoria at permablitz.net
they are making great inroads getting food back in backyards.

Topics about Culture » This month’s round-up of stories from across the Transition …
8 Apr 11:57pm

Round up of the week « Transition Town Farnham
10 Apr 4:48am

[…] Finally, on Wednesday, Rob Hopkins gave a round up of some of the many things that are happening in Transition around the world. […]

[…] There’s a sense of optimism as we become more and more aware that we’re part of a viral growth in community groups reacting to the joint environmental imperatives of climate change, peak oil, resource depletion and […]

[…] and upwards. There's a sense of optimism as we become more and more aware that we're part of a viral growth in community groups reacting to the joint environmental imperatives of climate change, peak oil, resource depletion and […]