A Local Currency Pilgrimage to Wörgl 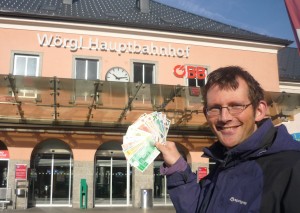 Well not quite, but en route to a gathering of Ashoka Fellows in Austria where I’ll be for the next couple of days, I by chance found myself in the Austrian town of Wörgl, famed for its alternative currency experiment in the 1930s.  In order to mark the deep influence of what happened there, and how it continues to inspire local currency schemes around the world, here I am in front of the station, with some Totnes, Stroud, Brixton and Lewes Pounds.  The Wörgl was introduced to the town in 1932, at the height of the Depression, when a third of the town was without work.  It is an amazing story. 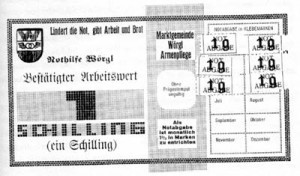 The town’s then Mayor, the wonderfully named Michael Unterguggenberger, was taken with the idea that the national currency promoted hoarding and disincentivised spending, and proposed instead what he called “Certified Compensation Bills” (not a name to trip off the tongue I grant you).  The notes were issued by the Council, who agreed to accept them as currency.  The idea of the Wörgl was that it was money that went off, it lost value over time, a process known as ‘demurrage’.  The notes needed to be stamped each month, or else they depreciated by a small amount, which incentivised its rapid turnover (a feature of the Stroud Pound).  The back of the notes contained the following explanation;

“To all whom it may concern ! Sluggishly circulating money has provoked an unprecedented trade depression and plunged millions into utter misery. Economically considered, the destruction of the world has started. It is time, through determined and intelligent action, to endeavour to arrest the downward plunge of the trade machine and thereby to save mankind from fratricidal wars, chaos, and dissolution. Human beings live by exchanging their services. Sluggish circulation has largely stopped this exchange and thrown millions of willing workers out of employment. We must therefore revive this exchange of services and by its means bring the unemployed back to the ranks of the producers. Such is the object of the labour certificate issued by the market town of Wörgl : it softens sufferings dread; it offers work and bread.”

The scheme led to a time of extraordinary success for the local economy. Bridges were built, houses, a reservoir, new roads and other infrastructure.  Six neighbouring villages followed suit, and before long, over 200 towns were also considering the scheme.  A fascinating eye witness account of the scheme’s success comes from Claude Bourdet, a master engineer from the Zürich Polytechnic who visited the town and described it thus;

I visited Wörgl in August 1933, exactly one year after the launch of the experiment. One has to acknowledge that the result borders on the miraculous. The roads, notorious for their dreadful state, match now the Italian Autostrade.  The Mayor’s office complex has been beautifully restored as a charming chalet with blossoming gladioli. A new concrete bridge carries the proud plaque: “Built with Free Money in the year 1933.” Everywhere one sees new streetlights, as well as one street named after Silvio Gesell. The workers at the many building sites are all zealous supporters of the Free Money system.

I was in the stores: the Bills are being accepted everywhere alongside with the official money. Prices have not gone up. Some people maintained that the system being experimented in Wörgl prevents the formation of equity, acting as a hidden new way of exploiting the taxpayer. There seems to be a little error in that view. Never before one saw taxpayers not protesting at the top of their voices when parting with their money. In Wörgl no one was protesting. On the contrary, taxes are paid in advance; people are enthusiastic about the experiment and complain bitterly at the National Bank’s opposing the issuing of new notes.

It is impossible to dub it only a “new form of tax” for the general improvement of Wörgl. One cannot but agree with the Mayor that the new money performs its function far better than the old one. I leave it to the experts to establish if there is inflation despite the 100% cover. Incidentally price increases, the first sign of inflation, do not occur. As far as saving is concerned one can say that the new money favors saving properly so-called rather than hoarding money. As money lost value by keeping it at home, one could avoid the depreciation by depositing in the savings bank.

Wörgl has become a kind of pilgrim shrine for macro-economists from a variety of countries. One can recognize them right away by their learned expressions when discussing the beautifully maintained streets of Wörgl while sitting at restaurant tables. Wörgl’s population, proud of their fame, welcomes them warmly.” 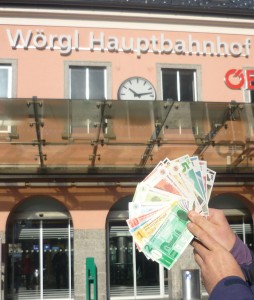 Then, after a few years, the Central Banks, appalled by the scheme’s success, took a court case which reasserted their right to be the only institution able to issue money.  The notes became illegal, and within a short period of time, the town returned to the 30% unemployment rates it had seen just a few years previously.  I would have liked to be able to have more of a nose around, as it was my experience of Wörgl was a rather fine piece of pizza for breakfast and then getting back on another train again, but I feel honoured to have set foot in this town which, for all too short a period of time, took control of its future and told a story that still inspires now, more than 70 years later.

[…] This post was mentioned on Twitter by GreenFeed, Rob Hopkins. Rob Hopkins said: Just posted about my very brief time in Worgl http://tinyurl.com/yzzm6et. Now at my destination… in the Alps, snowy mountains, gorgeous. […]

Many thanks for the friendly blogpost about Wörgl. We’re very proud of our great history in the 30s and we are still working on that intersting topic.

This is really exciting! Local currency makes me feel like I’m doing a good thing every time I do even a small errand and spend “local money”. A question occurs to me, though: How does one work with a sort of “exchange rate” between local currencies in various places?

Jct: I visited Worgl during my 1999 European speaking tour and the only point I want to make is that interest-free community currency works, it doesn’t have to be paid for with a demurrage negative interest rate that changes the value of the token. It can be financed with service charges and no change in the value of the token. And there’s nothing as stupid as varying the value of your measuring device.

Hi, thanks so much for this post. Would that we could make a new documentary about all this. Everyone is dying to know about this story. Great picture!
Love, Gargi

Inspirational post there Rob. I note that the mayor of the town has posted a response!! He must have a web-alert system for whenever the word “Worgl” is posted somewhere on the web – unless he’s an avid follower of your blog. Stranger things…

Hope you’re having a good time out there and managing to find some veggie food.

Hugs from the gang at Transition Network

The Web is a small town, Ben 🙂

Really I came here by a twitter-tweet from Rob about his visit in Wörgl.

Here you can find more about Unterguggenberger and the free-money-experiment of 1932/33, unfortunately in German.

Jct: Arno, why don’t you start a Worgl currency again. Now that it’s being done all around the world, who’s going to try to stop you now?

http://turmelpress.com/pomlizas.htm is a poem I wrote to Queen Elizabeth pointing out how a mayor could finance municipal projects with community currency. It’s been done by Argentine provinces, it would be nice if done by Worgl again.

Any Lancaster Transitionistas wishing to launch a Lancaster Lune? Please get in touch.

[…] Hopkins, of the Transition Town Movement, recently visited the legendary Austrian town, home of a very successfull open money experiment in the […]

Very inspiring indeed!
With more global economic collapse surely just around the corner some day soon, its stories liek this that can really bring hope to those fighting for a new economic system, that “The Fat Cats” are failing to recognise…still bandaging cancer with a plaster..