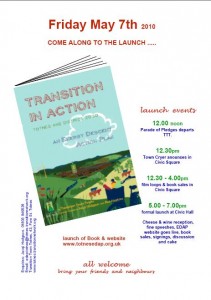 The long awaited launch of the Totnes and District Energy Descent Action Plan will take place on Friday 7th May 2010 in the centre of town. Over the next few days I will be posting more about the Plan, a labour of love for the last year and a half, which has emerged as a quite extraordinary piece of work.  You can now pre-order copies here.  The official launch of the Plan will be on Friday May 7th, the day after the Election.  Shoppers at the Friday market will be given some tasters of energy descent in colourful and musical spectacle as a parade of enthusiasts carrying pledges weave their way from TTT’s office in Fore Street up to the market and through the stalls at noon. The book will be on sale and a film loop of how the EDAP was created will be on show in adjoining venues during the afternoon. At 5pm there will be a formal launch with local advocates, book signing and cutting the cake in Totnes Civic Hall. All are welcome.  Keep up with developments here.

Congratulations to you all in Totnes!
FYI Rob, you put:
“The official launch of the Plan will be on Friday March 7th, the day after the Election. ”
I assume you meant “May”!
Hope all goes well, and we’re wishing you all the best, from our sunny Meditaranian Transition city.
xx

March 7th? Do you mean May 7th?
….and Congratulations! Well done!