« May 7th: Launching the Totnes and District Energy Descent Action Plan!
3 Minutes on Leadership That Made Me Smile »

How the Totnes Energy Descent Action Plan Came To Be… 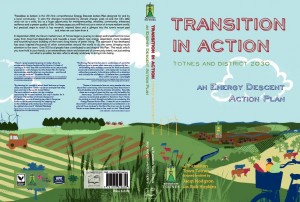 As we sit, expecting 1.5 tonnes of Energy Descent Plan to arrive at the TTT office next week, and are nervously wondering if the floor joists of our listed hundreds-of-years-old office (once described in the Sunday Telegraph as a ‘rickety set of rooms) will take the weight, or whether the opticians below will find themselves flattened by lath, plaster and EDAPs, it feels as though we are reaching the finishing line of a marathon.  This is a process that began in September 2008 with a launch event, and now, 19 months later, we are done.  Tomorrow I’ll reflect on the process, but for today, here is how it came to be. 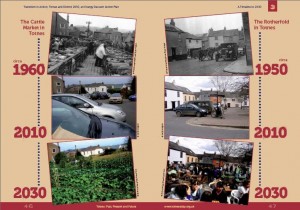 In the ’12 Steps of Transition’, the model used by Transition groups up to this point, ‘Create an Energy Descent Action Plan’ is the last of the 12 steps.  It aims to draw together the work undertaken so far into what is, in effect, a resilience plan for the settlement in question, a community-generated Plan B, or vision of a relocalised world, accompanied by practical steps by which to reach it.

Our process had 7 distinct stages to it, and here I will set those out, hopefully in a way that feels understandable, and ideally do-able,  to other groups.  TTT was fortunate enough to obtain a grant from Esmee Fairbairn Foundation which enabled us to employ Jacqi Hodgson for a year to hold the project, and a small grant from APE for materials and research, with me in a part-time supporting role.  She was appointed in August 2008, and the project, named ‘Energy Descent Pathways’, began. 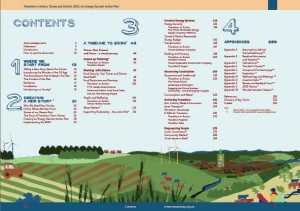 Step 1.  Developing a Framework: This involved the background research that such a plan required.  Some of that was researching existing Community Plans, Council publications, relevant literature and so on, and some of it involved oral history interviews and a survey of 220 households in Totnes and Dartington.  A plan was created for how the year would be spent, and the work began.  Two big research projects were initiated, ‘Can Totnes and District Feed Itself?’ and an Energy Budget for the area.

Step 2.  Key Tools: This stage involved Jacqi creating materials and tools, such as the Transition Timeline (a 15 metre long timeline from 2009-2030, used to ‘harvest’ visions of the future) and other visual materials.  The idea was to create a process that was playful, engaging, and which also developed an articulate and practical plan.  We wanted to create something that members of the community could pick up and feel excited about, and see their own ideas reflected in, but also something that would land on the desks of our local council with a sufficiently authoritative ‘thud’. 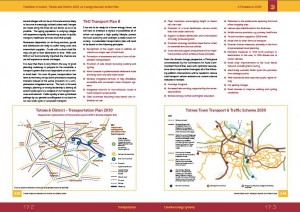 Step 3.  Engage the Community: this stage built off the work of TTT thus far and the engagement it had generated.  Jacqi’s work at this stage involved talks and workshops for a wide range of organisations.  She did a staggering amount of talks and presentations, not just in the town but in the parishes around the town.

Step 4. Public Launch: this was held in September 2008, and was launched by the Mayor of Totnes, the CEO of the local Council, head of the local small farmers association, the Chair of the Chamber of Commerce and others, and featured a cabaret style event with activities and exercises.  It was designed to create a buzz around the writing of this plan, and to be an invitation to get involved. 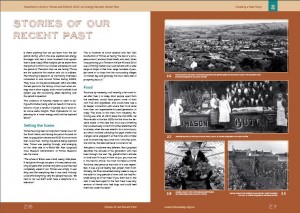 Step 5. Public Workshops: these took place in two rounds: the first round of 9 workshops focused on visions of the future and the assumptions underpinning them, the second round used those visions as a springboard for ‘backcasting’, setting out the practicalities of moving towards those visions. Also included at this stage was a one-day workshop and cabaret with the local Wondermentalist Cabaret, which created stories and poems about the future.

Step 6.  Backcasting on Strategic Themes: this included an exhibition in the Civic Hall and engaging with local schools, where the gathered visions were presented, and peoples’ ideas for backcasting were gathered. 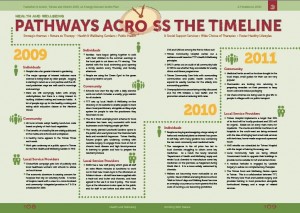 Step 7.  Drafting the EDAP and Consultation: here a working draft was created which was reworked by the TTT working groups and then opened up for widespread consultation online with the public as well as with experts in particular fields.  This process led to the final draft which was then designed and published as well as being accompanied by an online version.  Also, at this stage, schools were invited to provide drawings, other artwork was gathered, and some photoshopped ‘what the future might look like’ images were created.

Also created at this stage were a set of ‘Resilience Indicators’ for each of the subject areas.  Projects already underway in Totnes that had emerged from TTT were also gathered together as ‘Transition in Action’, to show that this process had already begun.  Step 7 was a lot of work, and Jacqi deserves the Nobel Prize for Transition for the incredible editing job that led to the final document, and thanks are also due to LumpyLemon who did such a beautiful design job on the final document (as you can see in these images).

Which brings us to today.   I’m off to re-inforce those floor joists!

Tweets that mention How the Totnes Energy Descent Action Plan Came To Be… » Transition Culture -- Topsy.com
28 Apr 8:27am

Ditto! Looks like a lot of work has gone into this. I wish it every success

Wow – well done you lot – hope the floor holds up – here in Lancaster we have Shaun Chamberlin visiting this weekend to start us off on the pathways . . . .

[…] lays out a model framework for Initiatives to follow, which culminates in the creation of an ‘energy descent action plan’ (EDAP). The EDAP lays out a future vision of a localized community in twenty years. It then […]