Another Invasion of Our Mental Environment…. Volo.tv 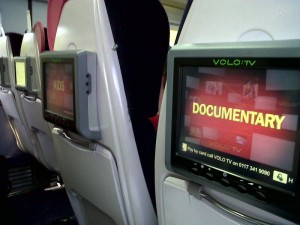 Been a while since I had a rant here on Transition Culture, but with just over two hours to go until England probably get knocked out of the World Cup, which will no doubt inspire another, here is a heart-felt rail against a hideous new phenomenon.  I wrote a while ago about the proposed London ‘Cloud’, a pollution of our mental environment on a dreadful scale in London (haven’t heard anything as to whether this is getting the go-ahead or not).  Well yesterday I came across another such mental pollution, on a smaller scale, but equally dreadful.  I boarded the 4.57 from Plymouth to Totnes yesterday, and found myself in one of First Great Western’s shiny new carriages.  To my horror, on the back of every seat, at eye level, was a colour television, each silently running through trailers for sports, documentaries, kids programmes and so on that you can now watch (at a cost) on your train journey.

The system is apparently the work of ‘Volo.tv’, and recently  was awarded the “Passenger Infotainment Innovation of the Year: Great Western’s Night Riviera Sleeper, for the Volo In-Train Entertainment System (ITES)”, at the prestigious (?) Railway Interiors Expo 2009 in Cologne, Germany.  According to their website, “Volo TV is the world’s first fully integrated on-demand individual entertainment system designed for train travel. Using a personal seat back touch screen, travellers in the Volo entertainment carriage will be entertained by world class comedy, drama and features and kept up to date with live RSS news feeds and an interactive journey guide”.

It isn’t free, of course.  You pay £1.50 for an hour, or £3.50 for your entire journey.  But that’s not the point for me.  I don’t actually want to be ‘entertained’ on a train journey.  As I sat in my seat, feeling already that this was a gross invasion of my mental space, I reached for the off button, turning of the screen in front of me, and the one next to me.  They went off, and I breathed a sigh of relief, but two minutes later came back on again!  I had to keep pressing the off button every 2 minutes until I got home and was able to get away from the things.

Volo TV claim on their website that the scheme has been piloted.  They write:

“Volo TV has been successfully piloted with FGW before launch. A trial coach ran in normal service for almost a year to ensure that there were no negative effects on normal operations and to gather feedback from users of the system. Following on from that successful trial, FGW has been offering Volo TV to customers on the Riviera Night Sleeper service to and from Penzance. Passengers have been delighted with the service and FGW have seen occupancy rates in their sleeper cabins increase”.

I can imagine in sleeper trains that people might want to watch some telly before they go to bed.  I cannot see though that on a normal train journey, anyone would actually choose such a thing.  If people want to watch something, they already bring their laptops, i-phones, mobiles, PSPs etc, etc.  Rather than offering ‘choice’, Volo.tv reduces choice.  If I get on the train on a beautiful day and want to look out of the window at the beautiful Devon countryside passing by, these screens are a huge distraction.  I already notice on journeys how my eyes wander to a neighbour’s laptop if they are watching an especially interesting film.  Volo.tv is the mental equivalent of passive smoking.  I don’t board the train wanting to watch a rerun of Gavin and Stacey, but if the person next to me is watching it, my eyes will inevitably be drawn to it, like the hypnotist’s swinging gold watch.

Most galling though is the fact that it cannot be turned off.  Rather than offering ‘choice’, Volo.tv actually gives you no choice whatsoever.  You WILL watch it, whether you want to or not.  I am someone who holds that the large majority of the population is sensible, and travels by train precisely because they enjoy looking out of the window, reading the paper, doing some work, reading a book.  I cannot believe that volo.tv has been “successfully piloted”.  I do not believe that the majority of people agreed, when asked, that having TVs on the front of their seats that cannot even be turned off was a good thing. If that is the case, I am living on the wrong planet.

We are already bombarded with adverts and uninvited images.  Streets in London, large stations and escalators on the Underground all expose people to huge TV screens showing adverts.  The ‘Cloud’ took this to another level, not quite projecting adverts onto the Moon, but starting to get close.  I am going to write to First Great Western and express my disgust, and will let you know their response.  This is a money-making venture and nothing else…  I do not need to be ‘entertained’.  I am quite capable of entertaining myself on a train journey thanks very much.  This looks like a pilot that will then be rolled out nationally, but we must make sure it goes no further.

Passengers of Devon rise up!  Cast these abominations from train windows across the counties of Devon, Cornwall and Somerset!  Reclaim your mental environment!  Reclaim your human right to a journey uninterrupted by constant visual pestering by a commercial company!  Save the rest of the nation from this uninvited assault!  When I reach for an off-switch, I expect it to actually turn the device in question off.  When I board a train carriage, I do not want to watch television.  Enough already.

Thanks all. While I do hope this discussion continues, I did want to say that in my role as moderator, I will not be allowing any more comments which advocate the actual vandalisation of the volo.tv screens…. I think those of us who feel they are a bad idea can be a bit more creative than that! Thanks…
Rob

While I am clearly biased, as I personally like the Volo system, I cannot fully comprehend the extreme negativity being shown here.

OK, so here is a large bunch of people who really dislike the way in which Volo TV interferes with and distracts passengers on a train journey. Fair play – I’ll certainly respect that. However, First Great Western are installing them across their high-speed fleet in *one* carriage, coach D. Therefore it is not at all difficult to avoid the screens.

Even if the rest of the train is packed, and you have to sit here, it can be turned off. Of course, having read this page, I see that there have been difficulties in the way in which this works, but according to Paul Soor this is now fixed. Regarding them switching on again after a station – is it *really* that much effort to switch them off again? I seriously don’t think so. It’s hardly as if FGW high-speed trains call at that many stations anyway – these aren’t local-stopping services.

It seems a lot of people on here are against the way in which they perceive the screens to be removing choice – surely having them removed would remove the choice of using them from people like myself, who actually quite like the system.

As soon as First Great Western announce plans to roll out the system in all carriages of their trains, I would fully back anyone who throws their arms up in despair at how their ‘mental environment’ is being invaded. Until then, why not just pick another carriage?

“picture and sound quality is way better than any in flight entertainment system, or dare I say it, an iPhone!”

I tried a demonstration of the Volo system yesterday on the Reading train. The only headphones I had to hand was my Nokia headset, which includes a microphone. So I plugged those in – and got very difficult to hear, almost inaudible sound from the several Volo screens I tried. Seems the earth grounding is in the wrong position to handle (and ignore) the microphone ring on a 3.5mm jack. This is a fatal flaw for a system that expects mobile phone users to text to pay, when the mobile phone headset can’t be used. They’ll just go back to watching stored content on their phones. As Paul says:

“our headphone jack is a standard one as on MP3 players.”

The 3.5mm jack standard has moved on.

Also, on the way better than any in-flight system – United Business Class has larger screens with 16:9 ratio (though the content is hit-and-miss), with provided noise-cancelling headphones… and the screens can be turned off. Virgin’s screens – larger, 16:9. Can be turned off. Volo’s screens are 4:3. Cheaper?

I was in a mostly-empty carriage gazing at a bunch of unused glowing screens. They should have turned themselves off after a few minutes. I don’t have a problem with the presence of the screen; I do have a problem with the presence of continuous glowing advertising, or worse, mandatory safety videos. A train is not a plane, and far safer. (The safety videos on the Heathrow transfer/Express subways are surreal).

Interestingly, in the many first class carriages there were no screens – but they were giving away copies of The Times, which is no longer available for free online.

Two questionable business models on one train! Three, if you count the buffet service…

Volo should xonsider Australia, where there are *long* train journeys and nothing to look at out the window.

Train journey’s tend to be boring. Some people can’t afford iPods. Some people can’t afford laptops. £3.50 to make your journey pass somewhat quicker sounds fair enough. Is other people talking in a restaurant a breach of your conversational rights? No, you shut them out and talk to whomever you’re with regardless, how can you claim the televisions implore your gaze? There’s more of an argument that people will now neglect to appreciate the countryside, but that also happens to be crap.
Only thing I agree with is that you should be able to switch them off permanently. Thats as far as it goes for me.