« Economic Collapse or Prosperity without Growth? A Conversation in Totnes…
An Update on All Things Transitioney and French »

An Interview with Alexis Rowell, author of ‘Communities, Councils and a Low Carbon Future’ 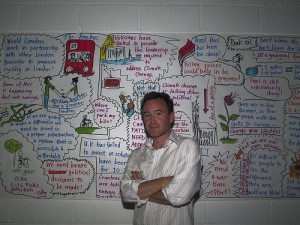 To celebrate the launch of Alexis Rowell’s book ‘Communities, Councils and a Low-Carbon Future: what we can do if governments won’t’, I recently interviewed Alexis about the book, and a number of other things besides.  My thanks to Alexis for taking the time to do this….

Many people’s experience of engaging with local Councils is an intensely frustrating one.  Yet in your book you argue that not only should Transitioners engage, but should also put themselves forward for office.  Why?

Yes, it can be endlessly frustrating. I often use the analogy of trying to turn a tanker. Or the Titanic! But a local authority can make a huge difference. When I think how much we managed to change in Camden during 2006-10 and how much good practice I’ve seen at councils around the country and abroad – frankly it’s amazing. So frustrating yes but worth it if you persevere.

‘Communities, Councils and a Low Carbon Future’: describe it to us in a nutshell…

It’s a blood, sweat and tears account of life as an elected eco warrior trying to encourage local government to work with communities to make the world a greener place. 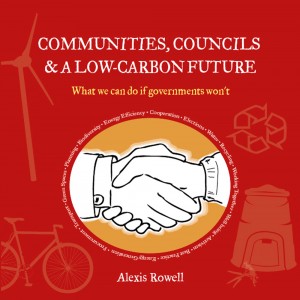 What is your sense of what a ‘Transition Local Authority’ would look like in practice?  Is it even possible?

Everything’s possible. That’s one of the things I’ve learnt from being part of the Transition movement. If you can imagine a different future then you can build it. A Transition council would be one where politicians and officers are fully aware of the implications of climate change and peak oil; where the community and council have a plan for life after cheap oil; where the council acts as an enabling force for community groups and as a liberator of new ideas from the community; where the council’s leaders put the local area and the planet before the needs of national government wherever necessary; where the priority is on increasing the happiness or well-being of residents above all else; and where there is space for a deeper understanding of the dramatic changes we are going through and how to achieve behaviour change. It would also agree that it’s possible to have a positive future despite climate change and peak oil, if we prepare physically and psychologically for it.

In your time as a Councillor, what did you find out about yourself?  What unexpected inner resources did you uncover?

I guess I learnt that you need patience – although I don’t personally have much of it! – because a council is a big bureaucracy and it takes time to change it. And that the more you frame your asks positively the more likely you are to get them agreed. I spent the first two years going around with two big guns marked climate change and peak oil. It works for a bit but not for long. That’s why Transition has been so helpful for me  – because it helped me reframe everything in a more positive way. If we dare to imagine a different future, then we can work out a way to get there. Whenever I hit a wall I simply tried to climb it a different way. Hopefully the book gives a sense of some of the mistakes I made so that others don’t make the same ones!

What would be your tips for those Transition initiatives just about to make their initial approach to their Council?  What are the good hooks, and what are the turnoffs for a Council meeting Transition for the first time?

When you do get your big chance, do dress smartly, don’t take your family and the dog, and above all don’t show too many slides with peak oil graphs on them. Don’t tell council officers or councillors how unsatisfactory they are. Do be patient – remember that councils are big organisations. Above all, offer solutions not problems. And remember that councillors and council officers are human beings too!

In the book you gather together a range of stories from around the country of Councils taking a lead on different aspects of climate change.  Is there one Council you regard as being the most cutting edge, the most committed and innovative?

The amazing thing about my experience of the last four and half years as a councillor looking around the country for eco best practice and latterly as Councils Coordinator of the 10:10 Campaign, is just how many councils are doing amazing things. And often they’re quite small district councils. But is there one council doing everything brilliantly? No. Usually a council is particularly good on one aspect of the sustainability agenda – like Middlesbrough on urban food growing or Kirklees on free insulation or Milton Keynes on local carbon offset funds.

Some councils keep popping up on my radar – Brighton, Eastleigh, Kirklees, Nottingham, Sutton, Woking  – but no council is achieving anything like as much as they could. I think it’s partly about what you know. That’s one of the reasons I wanted to write this book – to try to spread as much good practice as possible because there’s loads of it out there. The other reason was to help community groups and Transition Initiatives know what they could reasonably (and unreasonably) ask for from their council.

During your time as a councillor, you initiated a number of far-reaching changes.  Is there one you are most proud of?

At Camden they used to call me the “glass half empty councillor” because I was never satisfied. I look back now and I’m pleased we transformed the Planning Dept by training planners about things like the Passivhaus standard or green roofs, and by pushing politically from the benches of Planning Committee. I’m delighted that Camden was the first UK council to run its vehicles on biogas made from food waste. I’m glad I managed to persuade officers that helping residents to grow food was something worth pursuing despite the difficulties of measuring the direct carbon reduction benefits.

And I’m happy that all the political parties went into the May 2010 local elections in Camden calling for a cabinet member for sustainability and for a 40% reduction in carbon emissions across Camden by 2020. All those things and more than a hundred more policies like that are great. But there’s so much more to do. So am I satisfied overall – no, because I think unless there’s a Herculean effort over the next few years to change policies and mindsets… well, let’s just say it there isn’t then it will make it much harder to prepare for the future.

Finally, here at Transition Culture we held a competition where people could win a copy of your book, and the question was what ought to be the next book in the Transition Books series… what do you think it should be?

I took part in that competition! As if I needed another copy of my own book!?! My vote was/is is for a book on Inner Transition, on helping people to prepare for the psychological aspects of dramatic change. I think that’s one of the things that really sets Transition apart from other environmental and carbon reduction groups – the fact that we acknowledge the need to externalise the pain, the loss, the grief, the anger and the frustration that we are all going to feel over the coming years. Most people bottle this up – even many Transitioners!  We need to learn to be more emotionally and psychologically aware about what we’re going through. The more we talk about it with people we trust the better prepared we will be for what comes next. I think we probably need to move away from calling it Heart and Soul because that seems to scare people. Either way, it feels me that there’s a huge amount that could and should be put down in a book. And I for one know it would help me.

What are you hoping your book will achieve?

In an ideal world every Transition Initiative would buy 60 books at a huge discount from Green Books and give one to each councillor and senior officer on their councils. They won’t all read them but if some of them do, then change is possible.

Thank you Alexis for this brilliant interview, focussed, balanced, positive and vulnerable…a bit like you really.

Communities, Councils and a Low-Carbon Future: what we can do if governments won’t « HBS Japan
25 Oct 2:50am

Alexis thank you for visiting Lewes. You are a hugely inspiring person and I look forward to finding a way to inviting the entire council to a meeting addressed by you to tackle local resilience in the face of peak oil and climate change. Great book, keep it going!