« Open Space Day about Dartington’s Land Use Review
How might we reminisce about the Age of Oil and Debt? »

We’re starting in Hungary with exciting news…because Tracey, Isti and Peti from Global Projekt and from the first Transition initiative in Hungary – Klimabarát Wekerle – have been busy working on the magyar felirattal, or Hungarian subtitles, for the In Transition 1.0 film, and they’re all finished now! Here is the subtitled version, and Tracy also has DVD copies available. Thank you all so much!

In the Netherlands, we have Transition Town Rotterdam’s website with a little movie of Danielle Cohen talking about ‘Inclusion in Transition’, which is very useful…, and while we’re talking about translations, for all you German speaking Transitioners, the short ‘what is Transition?’ film made at the 2009 Transition Network conference is translated into German …thanks so much to those who translated it…

Also from Germany, here is Frank Viohl from the Transition initaitive in Witzenhausen discussing (so far as I can ascertain) Community Supported Agriculture (CSA) and “Action Learning” in the Transition context:

Over in the US, Transition Town Putney has a lovely story of their community garden and how it’s going – it seems there’s huge interest in the project as all the 44 plots up for grabs are already taken, so they may now search for more land to satisfy the needs of those on the waiting list. The founders of Transition Voice and T Staunton Augusta gave a talk about the Transition movement to people in Charlottesville, VA, so let’s hope it leads to more Transition initiatives starting up there…

Transition South Bay LA is holding a Transition Salon as well as a workshop on the ‘Healing powers of local food and cultured vegetables’. A new Transition group has emerged in Southside Pride called Longfellow Transition to Sustainability, so we welcome you and wish you a fantastic future. People in Berkeley are invited to an introduction and discussion about how to help create a Berkeley Transition Town, so if you’re around there then why not go along and get involved. Have a look at Transition Boulder’s Transition Singles… while Transition Pittsburgh is holding a gift circle…what a great idea!   Transition Town Manchester will hold a potluck dinner and discuss future plans for Riverwalk, and start planning for springtime activities such as nut tree planting (hooray for spring!), while Transition St Clair Shores will be watching ‘In Transition’ and then discussing how they can transition towards a more sustainable future for their city.  The Bucks Transition Group recently held a ‘Citizens Energy Forum Unconference’, here’s a great little film about it:

Transition San Fernando Valley has started up the San Fernando Valley Time Exchange, a cooperative enabling people to exchange hours of instruction in Transition skills such as solar cooking, raising backyard chickens, low water gardening and rainwater collection. Transition Town Northern El Paso County is a new Transition Initiative busily raising awareness with movies and discussions on how to put Transition into action, so we welcome you and wish you all the best.

In Canada, Shuswap in Transition is continuing with their series of discussion evenings focussed on Rob’s Transition Handbook…and there’s a new initiative at Transition Denman Island, so we welcome you and wish you the very best for the future…  Also, here’s a short film showing Geoff de Ruiter of Transition Victoria Green Energy Working Group showing off the solar air heater the group helped to install a  on the roof of Share Organics, a local organic delivery box service, in Victoria BC. The system takes cold air out of the building, heats it through a series of tubes and then pumps the warmer air back into the building.

Down in Australia, Lower Hutt Transition Towns and Hutt City Council have come together to provide a free environ-forum for their local communities to discuss ideas such as more market gardens, creating a foraging map and providing opportunities for environmental education. Transition Town Riddell is looking for people to run some of their projects such as a wholefood store, book exchange and a carshare scheme, so if you’re around that way then why get involved with some of these great ideas.

Across in New Zealand, Transition Town Invercargill is giving the opportunity to join the regular Green Drinks for an informal meet up and chat about all things green, while Transition Towns around Canterbury and Otago are planning a regional gathering in April, with shared meals, time for socialising, and an open space to discuss what’s worked, what hasn’t and the way forward for the future. So if you’re one of those groups, then do get in touch with them and get involved for some networking, socialising, discussions and ideas sharing.  James Samuel in NZ recently gave a talk at the ‘Signs of Change’ conference, here it is: 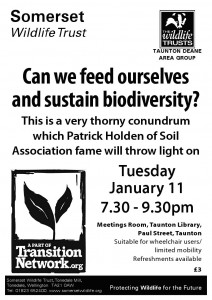 In the UK, Transition Town Beaminster will be preparing a local food directory to help local businesses sell more produce locally and also to raise awareness with local people about where they can purchase local products. Transition Town Wivenhoe is in discussions with National Express and Network Rail to see if they can use the local station master’s house building as a community resource…an excellent idea! Transition Town Taunton and Somerset Wildlife have organised an evening talk by Patrick Holden, International Ambassador for the Soil Association, on ‘Can we feed ourselves and sustain biodiversity?’, while Transition Town Louth hosted a talk by Alexis Rowell, author of Communities, councils and carbon: what we can do if governments won’t’.

Transition Town High Wycombe recently held a New Year Party attended by lots of people with some great discussions and a very special cake… Transition Town Tooting recently held a fantastic event called ‘Mind How You Go’ where they celebrated their local area and the benefits of walking, and they now hope to create mini walking maps… Photos have been a crucial part of this project… There’s also a wonderful story about how maps have been so important in TT Tooting’s development, starting with a walk about to visit local places of worship and meet people of different faiths.  Also, here is a short film where TTT’s Lucy Neal reflects on the experience of the Trashcatchers’ Carnival…

Portabello TT – PEDAL – has got together with Kitchen Canny to organise a great series of events called ‘Love New Year, Love Your Food!’ where they’ll look at foods that are great to grow at home, seasonal menus and lots more. And from a member of Transition Town Sturminster Newton, we have the January newsletter of Herbs for Healing. There’s some news on the Transition Town Totnes Building Group’s project to develop 15-20 low-carbon affordable homes, which is an ambitious yet much needed project in the local area, and also an update on their Green Energy for Business project.

Transition Town Tooting’s very own Lucy Neal is filmed talking about the important role of the arts in societal change, and uses TT Tooting as an example of how to collectively re-model communities for a low-carbon future.  Also on camera, from Transition Finsbury Park, is Jo Homan, who here reflects on Transition and TFP’s work:

Residents of Lockerbie are planning an event to discuss Transition as a way to improving their lives and creating a sustainable community, so we wish you well and hope you’ll join Transition soon.

Transition Town Bridport has just established a new food group and their first plans are to develop a food database, re-organise the local market to better support local food producers, raise awareness about the availability of local foods, encourage local people to buy them and also build links between local producers and consumers.  Transition Town Horncastle is have a celebratory coffee morning to mark the end of their very successful Green Babies and Toddlers project with lots of activities, recipes, advice and freebies.

Transition Town Bromsgrove recently held a workshop for local people to imagine and help create a vision of what sustainable life would be look like in the town in 20 years… And here’s a wonderful tool set up by one of the co-founders of Crystal Palace Transition Town: it’s a website to help facilitate local skills swaps and skills sharing. It looks really useful, so have a look and try it out. Dawlish Transition is just getting started, kicking off with a film night and a couple of guest speakers, one from Teign Estuary Transition, so we wish you a bright future in Dawlish. Alness Transition Town held an energy – and money – saving event with a fantastic turnout of 250 people. The group gave out eco-vouchers, energy saving devices and some fab draw prizes.

Transition Town Wanstead has just launched a new website, with news of their activities, an ideas page and some nice pics. Transition Town Dorchester recently held a wonderful wassailing ceremony at the railway orchard…but I’m a tad worried that the little robins might have got a bit tipsy!… Transition Town Tewkesbury together with Vision 21 will be holding a green theme pub quiz, a good way to test your green knowledge, learn a bit more and win a beer…if you’re the very  best. Transition Town Christchurch recently held an event to celebrate their achievements over the last year, swap seeds and share advice on planting by the phases of the moon. Here’s a very handy map of all the Transition initiatives in London…

We welcome another new Transition group – Macc 2020: Macclesfield in Transition – and we wish you the very best. Transition Town Bromsgrove have held a visioning session to see how their future might be in 20 years’ time: have a look and see what they came up with. Transition Kentish Town is holding an open space session to discuss how they can build a better future for their community, while Transition Town Lewes has put up their calendar of events for February, which looks fab with films, seed and willow days and a programme of woodland skills sharing…a great programme to see you on the way to spring.

The new Jersey in Transition initiative is getting things underway with a ‘Getting into Action’ forum, and held their first meeting at the end of January…they’re also eyeing up possible locations to establish a base.

That’s all folks. Have a good February and we’re looking forward to more stories.

Wow, what a lineup! One small correction: Lower Hutt is in New Zealand not Australia – close (sort of). 🙂

Wow!!! I’m so inspired to keep doing more!! thanks for all that – and for everyone out there moving & shaking & growing!

great, what an energy, what an action! thanks for th review and all the inspirational examples

[…] It’s hard not to be inspired by the monthly updates from the Transition movement, via Rob Hopkins. […]