Resilient to what?: a fascinating new look at risk 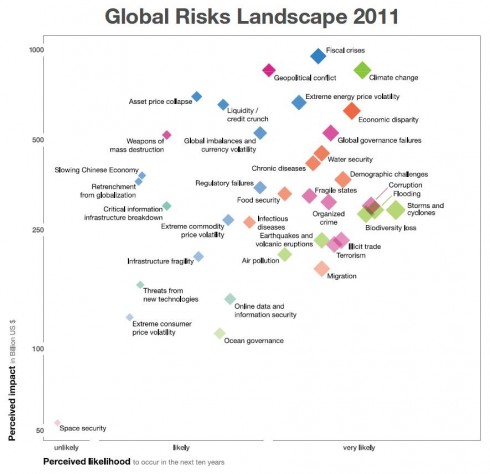 I was reading through the Executive Summary of the World Economic Forum’s Global Risks 2011 this afternoon (as you do) and the chart on page 3 (see above) caught my eye (click on it to enlarge it).  In it, the authors set out all the risks they see in the world on a matrix which positions the various risks by their perceived impact on the global economy and by the perceived likelihood of their happening.  What you might expect to be at the top, given recent media reports, would be the threat of terrorism or perhaps some hideous computer virus that knocks out nuclear power station.  But no.  There at the top, leading the pack, are climate change, ‘extreme energy price volatility’ and fiscal crises.

In my research over the past couple of years on the subject of resilience, I often ended up at the question of ‘resilient to what?’  In a paper for the think tank DEMOS called ‘Resilient Nation’, Charlie Edwards listed the things he felt we should be preparing resilience to.  They were climate change, floods, extreme weather events, pandemics, energy shortages, nuclear attacks, terrorism and a few others.  The UK government Cabinet Office runs ‘Regional Resilience Teams’ who are charged with creating plans for each region.  Yet the main focus of this will most likely be on terrorism and pandemics.

In the Transition movement we have argued for 5 years now that we need to base thinking about resilience primarily on both mitigation and adaptation when it comes to climate change, as well as to peak oil and the volatility of energy prices and, more recently, to the economic troubles affecting us.  We have argued that planning for resilience without these concerns at the forefront runs a high risk of really rather missing the point.  Indeed, we have argued for a different take on the whole notion of resilience, one that says that rather than it being about what do we need to put in place so that we can just about survive when something extremely ghastly occurs, perhaps building resilience could be seen as a positive process.

If breaking our dependency on cheap fossil fuels, massively reducing our carbon emissions and creating more economic resilience were instead to be seen as an opportunity, then our thinking shifts.  In this context, making our communities more resilient becomes a historic opportunity to rethink how it feeds, houses and heats itself.  The whole idea of ‘localisation as economic development’ comes into its own.  Yet we still live in a time where the official government position is that peak oil isn’t a problem for a couple of decades yet, and where the idea that it is a sufficient risk to warrant preparations for is dismissed. DEFRA in 2006 argued that the just-in-time distribution model on which our food system depends actually increases our resilience, a position which, apart from more recently recognising the value of local food production, is still largely in place.

Yet here is the World Economic Forum stating categorically that the three key risks over the next 10 years are actually energy price volatility, climate change and economic crises.  Last year, at the summit about what a government response to peak oil might look like, which Peter Lipman and myself attended, we gave a talk where we put up Elizabeth Kubler-Ross’ ‘5 Stages of Grief’, in order to show how Transition initiatives had, in effect, moved through the denial, anger, bargaining and depression, and had moved into an acceptance of the reality of peak oil and had begun giving serious and creative thought to what to do about it.  This graph from the WEF really stresses the importance of that.  What was most depressing about that event was how most of the civil servants there saw the solution to peak oil lying almost exclusively in improved vehicle efficiency.

Over the last 18 months of writing ‘The Transition Companion’, my thinking has been that these two concepts, of resilience and localisation, are central and vital ideas moving forward.  What the Transition movement has catalysed over the past 5 years has been a hugely insightful and useful ‘dry run’ of thinking through what all this would look like in practice, as well as actually starting the process of leading by example with the creation of a new infrastructure.  It is the practical embodiment of Tom Homer-Dixon’s assertion, in ‘The Upside of Down’ that “if we want to thrive, we need to move from a growth imperative to a resilience imperative”.

Anyway, I could write about this for ages, but I need to finish my preparations for the trip to Liverpool for the Transition Network conference which starts tomorrow.  In summary, I think this chart is fascinating, and it puts current government thinking on the question of resilience in the spotlight.  If these three things, and also economic disparity, which is another area that Transition initiatives are working hard to address, are actually the key risks over the next 10 years, then surely a profound rethink is needed.  ‘The Big Society’ surely doesn’t even come close.

Excellent article and links for me to share. Thank you.

Thanks for highlighting this Rob. Really useful.

Could be my eyesight, but what happened to the link between ‘energy price volitility’ and ‘food security’?? Guess I’ll just have to draw in on my hard copy!

David Pencheon, director of Sustainable Development Unit of the NHS, was saying the other day that policy changes happen after a shock crisis, and that we have to be ready with everything planned, with legislation ready to sign-off. I think that’s exactly what transition is preparing now. But I asked him whether he could think of such a shock crisis, given that climate change and peak oil are more like slow burning fuses (unless you go for the apocalyptic interpretations). His answer refered to economic problems, transport problems. While it’s good to make the business case, is there an issue that if it all boils down to money, do we miss out the environment again, and end up singing the same tune as pessimistic business analysts…? I mean it’s important to have the economic argument, but we shouldn’t lose the ‘issues’-climate change and peak oil, otherwise we may lose opportunities to engage people?

This certainly reinforces the reasons for building resilience and an answer to that question for all transition towns in developing their Energy Descent Action Plans.

I keep hearing the words of historian Arnold Toynbee, who wrote and published Civilization on Trial in the 1940s, saying, the West hasn’t learnt it’s fall lesson yet. And that lesson is that it too can fall, just as all the other civilizations did.
And he also suggests that all other civilizations failed because their politics couldn’t respond to the particular challenge that was happening at the time of their success!

I don’t see happiness there, whats going on?
Good day to all! Import philosophies of happiness.
You know one?

And here I thought I was the only wonk that read such material. I have a printed copy of that report on my desk.

For a complete transformation of technology on which human economic activity is based: “In the next three to four decades, humankind must manage a fundamental overhaul or risk failure in fulfilling global commitments to end poverty and averting the catastrophic impacts of climate change and environmental degradation”. The World Economic and Social Survey 2011 http://bit.ly/qpd2vi

Thanks for your comments Barbara and yes Richard page 4 isn’t encouraging.
My perception of DAVOS is that only genuine thinkers with cred go/get there and they use it as a gathering of like minded world citizens and contribute on the basis of intellect not partisan policy positions of “not on my watch”.
Its wonderful how quickly stupidity dissolves when confronted by real gravitas but that said I read the Club of Rome reports in the 1970’s and I’m still waiting for recognition and acceptance of some of their insights.

Thank you for highlighting this, which I picked up on in the Transition newsletter. We are in the run-up to an election in the Isle of Man, and this is something concrete and ‘credible’ to put to politicians.

About page 4 graphic, i am now convinced that global warming is tightly linked to global governance failure. I am amazed to notice how these two “risks” are not connected together on this graph. My deep opinion is that there won’t be any significant program for resilience (I mean at the needed scale) until democracy is actual. So far, governments runs for private interest which, de facto, is leading a war against resilience. Thank you.