« In conversation with Transition US: a transcript
Competition Time! A beer-themed one with some great prizes! »

Happy birthday TTT! & tools for stopping to ask ‘how are we doing?’ 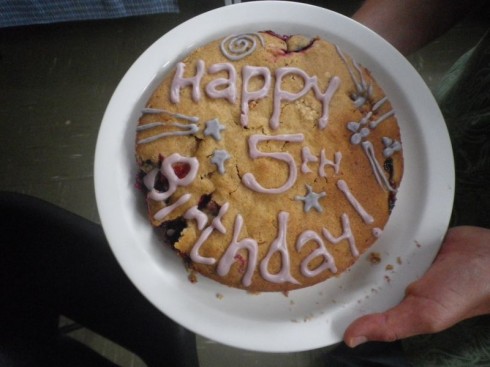 Today is the 5th anniversary of the ‘Unleashing’ of Transition Town Totnes. Feels like quite a landmark to me. On Saturday, TTT held an event to celebrate and reflect on the journey so far and on where we might go from here. In spite of it starting at 9am on a Saturday, over 70 people came, and we had a fantastic day. The day was chaired by Chrissie Godfrey and Paul Birch from Taunton Transition Town, who beautifully facilitated a very energising day. In the forthcoming ‘The Transition Companion’, one of the ingredients is called ‘How are we doing?’ and it looks at how groups can pause and reflect. What I want to do here is to set out the process we did on Saturday, in the hope that your Transition initiative might find it useful for having similar reflections.

Starting with a song

The day started with a group song as a four-part harmony, nothing too challenging, but very enjoyable. 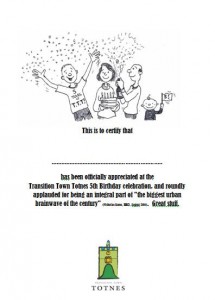 When everyone arrived, they were presented with a certificate (see above). The wording read:

“This is to certify that …. has been officially appreciated at the Transition Town Totnes 5th Birthday celebration, and roundly applauded for being an integral part of “the biggest urban brainwave of the century” (Nicholas Crane, BBC2, August 2011). Great stuff”.

They were invited to write their name on them, and then someone pinned it to their back. Then, once everyone was together, people were invited to move around and write on each others’ backs something they have enjoyed about working with that person over the past 5 years. 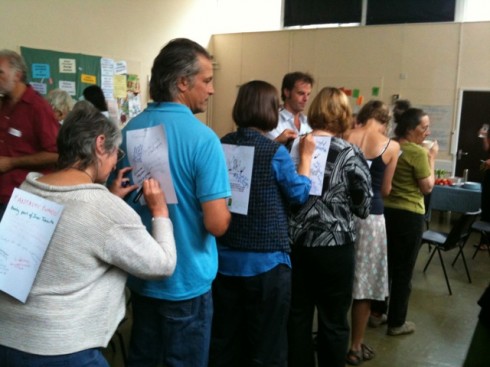 Then everyone stood in a big circle, and each person presented the person to their left with their certificate, and read one of the comments from it. 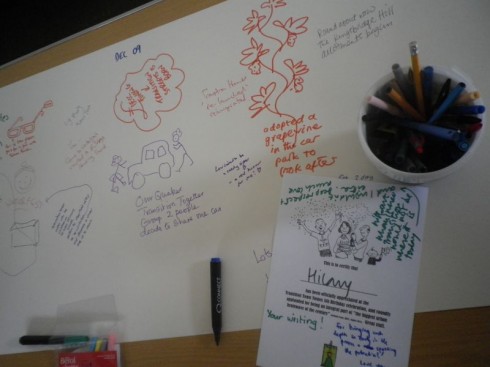 A very long piece of paper was laid out over several tables, with dates along it, and people were invited to add their memories of events, when they arrived in the process, and any particular developments, either written or drawn. Over the day this evolved into a fascinating record of the process so far. 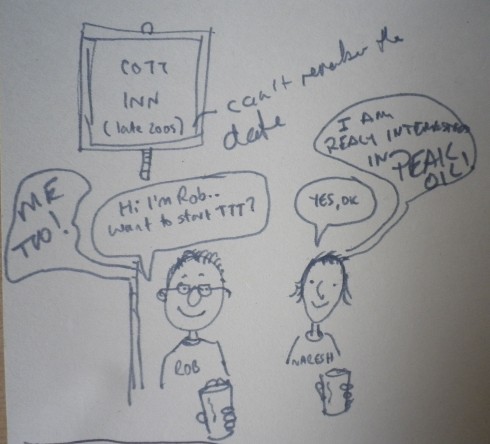 The moment I met Naresh Giangrande and the idea of what was to become TTT was first discussed is captured in the TTT Timeline...

Exploring the different dimensions of what we do

In advance of the event, the key areas of what TTT does were identified, and these (internal communication, outward facing communication, programme of public events, how we meet as groups and make decisions, how people join us, structure, personal and organisational resilience and wellbeing, and overall direction/mission/dream) we then laid out on the floor around the room. 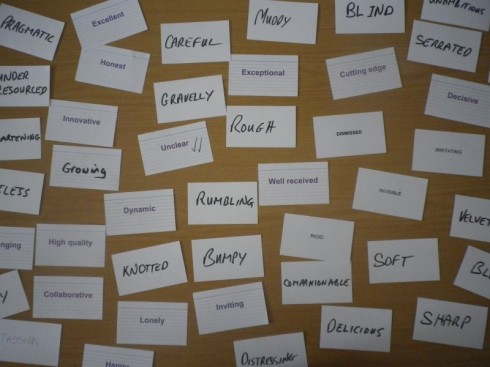 On another table, lots of small cards bearing single words were arranged, and people were invited to take some of these and place them where they felt they were relevant. The words captured a wide range of positive and negative qualities, and for about 10 minutes, people circulated, placing the cards where they felt most appropriate. 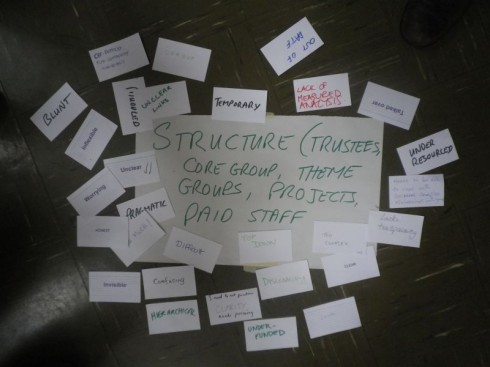 Then chairs were circled around each one, and a World Cafe-style session was run, where each group was asked to consider what is working well and not so well in that area of TTT’s work, as well as strengths and weaknesses and learnings and intentions to take forward. These were then shared with the whole group. 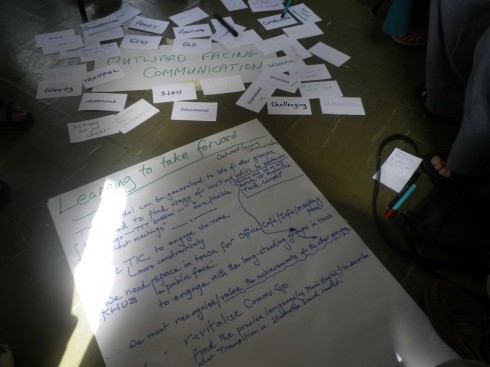 Then it was time for a fantastic lunch prepared by by the amazingly talented Holly, who’s Brunch Cafe is highly recommended (next one in the Methodist Hall on Saturday 24th Sept) and the equally amazingly talented Sima, who will soon be starting her own catering company (watch this space) both of the TTT Food Group (naturally!).  During this break, people were able to contribute more to the Timeline and spend time catching up with each other. 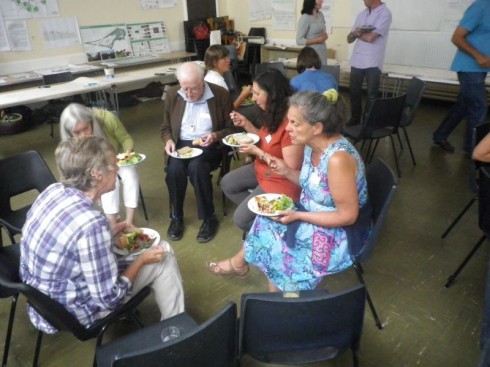 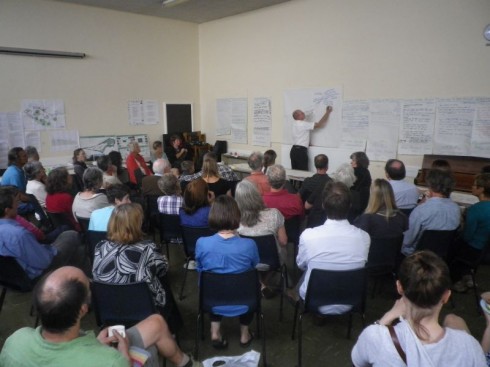 The first activity after lunch was a mapping of the external context of TTT, who we have created partnerships with, arranged in a big mind map. This identified the wide range of relationships that have been created, whether they are formal partnerships or more informal relationships. 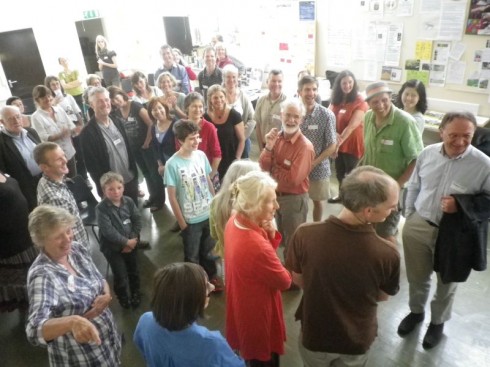 We then did a mapping with people, with one end of the room being focusing on individual change, on practical action at the household or very local level, and the other end of the room being focused more on structural change, big projects or impacting on the political scale. People arranged themselves in terms of where they felt they were putting most of their energy. Chrissie then moved among people, interviewing a few of them about where they were and how it felt to be there.

People were then invited to move around the room and to find someone they didn’t know, to spend a minute introducing each other, and then to ask the question “if we knew each other better, what becomes possible?”. This was done three times, I certainly got to meet people I have never met before, and it was great to hear what they are doing and their experience of being part of TTT.

Short visualisation about moving into the future

We then did a short imagination activity focused on the question “if everything TTT is doing now came to fruition in 5 years time, what would it look like?”  We were invited to try and imagine it in as clear detail as possible, and then to turn to our neighbour and to tell them what was most compelling for us in that vision.  We then re-mapped TTT imagining us in that future, observing if there were any differences between that and the earlier mapping.

The ‘Timeline of Future Possibilities” 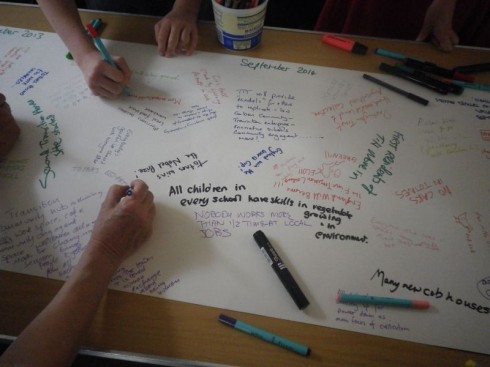 We then extended our timeline into the future over the next 5 years, mapping out developments we’d like to see and things we imagine happening at different stages.

So then, what next? 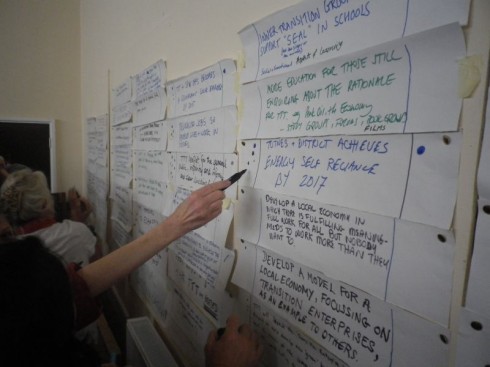 We then moved into small groups and discussed the most important things to take forward from this point.  Each group was given a number of strips of paper and invited to write down the tangible projects or initiatives that it would like to see/make happen.  These were then arranged on the wall and people allocated a number of dots they could use to ‘vote’ on those they had most energy and enthusiasm for.  People were invited to put their names next to the ones they felt most enthusiastic about helping to make happen. 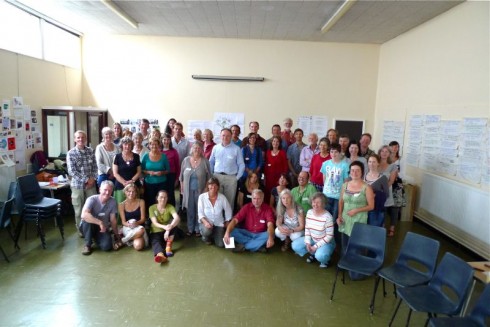 The day closed with singing ‘Happy Birthday’ and having some of the wonderful TTT birthday cake.  It was a fascinating day, a real celebration of where we have come from, a deep appreciation of those working on this project, and a re-focusing and re-energising for the next 5 years.  Thanks to Paul and Chrissie for their facilitation, to Holly for the amazing food, and to everyone who has helped us over the last 5 years.  I left with a very powerful sense that actually, we’re only just getting started.  I hope these activities (with thanks to Paul and Chrissie for letting me share them) might be of use in your Transition group’s reflections.  Happy birthday TTT!

Most of the photos here are ones I took, but thanks also to Peter Redstone and Jonathan Crinion (get well soon!) for use of theirs.

Happy Birthday and keep up the good work. Greatings from Germany

BIRTHDAY GREETINGS from Fitzrovia Transition
in the shadow of the BT tower : we love your
inspiration! Fiona

Happy birthday TTT! Thank you for your great work and the magnificent example you are setting for all of us !!! Best wishes, ciao from Palombara Sabina (Rome) group.

Happy birthday Totnes from Drewsteinton where I have tried!!

Yes, it was a really great day, thanks to everyone who made it happen.

Also, we had a 10 min slot for everyone to look at the great displays on the walls that most of the Transition Groups had put up about their work over the last 5 years.
I found this was really useful, as although I’m familiar with the Arts Group activities, it’s difficult to keep up with news from all the others – plus I absorb info much more easily through pics than words

If/when? we repeat this I hope we’ll be able to make a Timeline that combines photos, drawings and writing.

what a wonderful way to celebrate and full of good ideas for us to plunder! Wishing you all many happy returns.

Happy birthday TTT!
Transition Brazil send you all the best possible wishes!
Thank you for your having such a great idea and for being such an inspiration for all of us!
issa

Happy birthday! You’re an inspiration to the world.

Happy Birthday TTT, some great ideas that you’ve shared about creative ways to celebrate, reflect and re-vision.
Thanks as always,
your neighbours Transition Newton Abbot.

As one of the two facilitators for this lovely day, I have to say what a privilege it was to be asked to be involved, and how insightful it was for us, from a neighbouring Transition group (Taunton in Somerset) to see another group in action, in depth. Can’t recommend highly enough the value of connecting so richly with our friends and colleagues in this way. So much learning to be had. And if anyone is interested in talking to me about the day’s design and the tools we used in more detail, please shout!
chrissie@visionjuice.com

Oh and another thing – we need to thank Robin de Cartaret (sp?) for leading the first part of the day – the singing and “appreciations” – beautifully done!

Happy Birthday TTT! and sooo lovely to see pics of you all again 🙂

Transition Brighton & Hove had two big sessions looking at how things were going, and both were good examples of what to avoid.

The first one was a big session called “What the hell are we doing?” that was started by a member of the group that had been very influential at the beginning, but had left Brighton for a while, and after returning, wasn’t too happy about developments since going away. The session had a number of interesting activities but left people attending with no feeling that any specific conclusion or way forward had been agreed. At the end there was a big talk in common trying to tie everything together, but the main result of that was a confrontation where a number of people said that it was too soon to do an EDAP yet, while other people felt very strongly that the EDAP project should continue. It was mostly a failure of planning the meeting properly, because it would have been far more useful, instead of trying to throw everything together in the same pot, to discuss and tackle each issue one by one, and if anything proved contentious (and there were good reasons to think in advance some points would be), have some kind of clear idea of what to do about it, for example, appoint a group of people to look at that particular issue.

The second evaluation session was planned around a year afterwards. It was added to a meeting where the chair was elected, to add something interesting to what could be otherwise a very bureaucratic meeting. But the election of chair got quite heated, and there was no time left for the evaluation. Again, the meeting could have been better planned in advance, knowing that the election could get heated and having discussions before the meeting to clarify everyone’s position, so the options presented to the general meeting were agreed by all, and that way it wouldn’t have taken so long that it took over the second part of the meeting.