« A sneak peek from ‘In Transition 2.0’: The Green Valley Grocer and the Handmade Bakery
Transition Brasilianda on Brazilian TV » 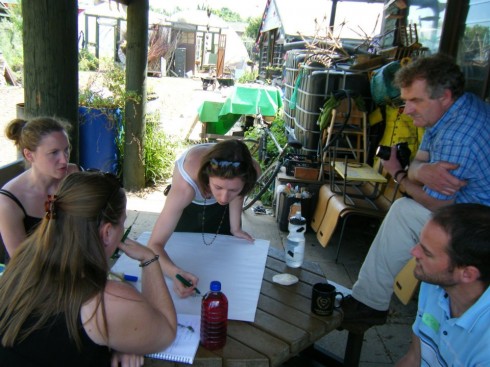 [A guest post from Naresh Giangrande and Mandy Dean] “Other Transition groups would give their right arm to have something like this”. Those were some of my first words to Peterborough in Transition as I rounded the corner and stepped off a busy city road and found myself in an urban oasis, bounded by the East Coast line on one side, and KFC on the other!  The culture shock of coming from Switzerland; the orderliness, the way in which everything in Switzerland is just so, took a while to recover from. From a world of order- (did I say that already?), planning, government targets, suits, and a business like approach to the natural ‘chaos’ of Permaculture, doing things on no budget, begging, borrowing and liberating what you need and running on good will and instinct was more than a physical journey. 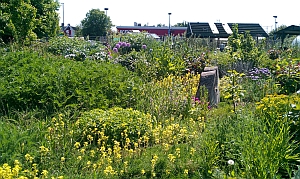 We ran our latest Transition Thrive in the Green Backyard which is an urban garden, meeting space and inspiration for the Peterborough in Transition (or PinT) project. For other group who want to see how to use facebook effectively, the Peterborough page are a good starting point. Mandy Dean and I had the unusual but very welcome opportunity to work with the PinT group for two days. Our intention was to facilitate them to fulfil their wildest dreams, while keeping their feet firmly on the ground; to take their next steps in Transition. And to sprinkle some inspiration dust and enjoy our time together. 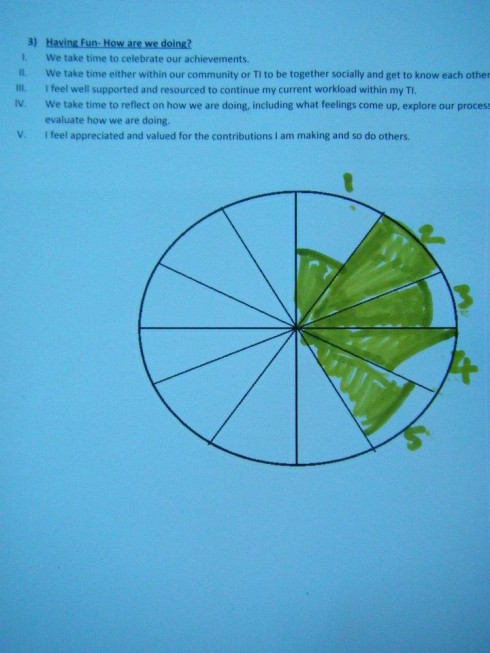 Our Transition ‘Dog-nostic’ had its first outing and proved to be a really useful tool to diagnosis the health of a Transition Initiative (TI). Based on inspiration from Sophy Banks, this offers a simple image which summarises the key elements of the early stages of Transition. We have found the Transition model described as a set of ingredients too complex and lacking in structure to clearly communicate what’s needed for a Transition project to get off the ground for groups in a training setting.

Sophy came up with the image of an animal – a dog perhaps (hence Dog-nostic)  – whose four legs represent the four key activities of the initial stages of Transition –  Awareness Raising, Networking and Partnerships, Groups, and Practical projects.  The animal is looking ahead. It has done its visioning so it knows where it’s going. And its tail is wagging, showing that it’s having a good time. The dog has a patch of ground which is big enough but not too big. 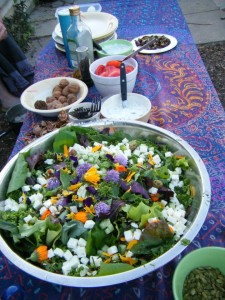 So, if any of the four legs is weak or missing, the Transition Initiative (TI) will be going slower, maybe just limping along or going in circles, or if two are missing it probably isn’t moving much at all. If its line of sight is not pointing in a direction representing the positive intent of Transition it won’t go anywhere because it won’t inspire. If its tail isn’t wagging it’s likely to run out of steam even if it starts out really well. And the ground it’s moving in is the right size to create a feeling of belonging, as well as being big enough for a Transition vision to make sense.

Based on this we created a “Transition Dog-nostic”. For each of these seven doggy characteristics, we came up with a set of questions that enable a TI to assess how successfully they are applying the Transition model. The answers from the group on the training were fed into a visual representation which gave a clear picture of what’s working well and what needs attention. Judging from the feedback we felt that this is a powerful new way to assess the strength of a TI and define the ways forward.  We are making the Dog-nostic freely available to Transition group. Just send an email to Kat (email address, see below) who will send you the tool. Please send us your feedback both on how it works and the results so we can all start to understand more how Transition is working. 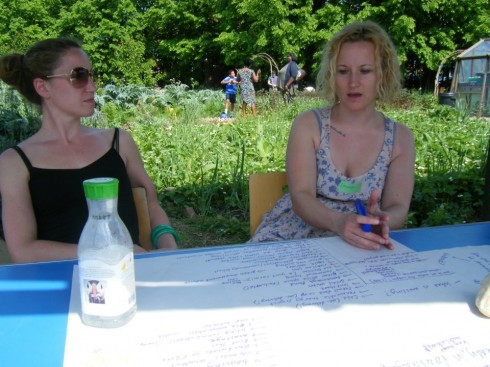 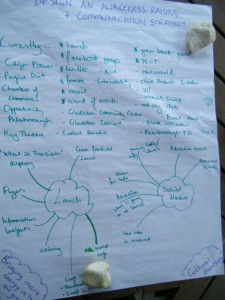 The rest of the weekend was shaped to respond to what we saw and understood in this exercise – filling in gaps in practice of the Peterborough group and putting some inspiring ideas and possibilities out as ways they might want to go in the future. Our job was made quite difficult in some ways as so much of what PinT is doing has been done so well. They have spent lots of time forming the group, and although they are a relatively young TI there is a strength that comes from this work. Their physical meeting space serves as a focal point and a pointer to the practical manifestation that Transition groups often make further down the line. That the group was also very strong on celebrating and having fun together makes it a magnet for others to join.

Thrive also includes a piece which looks at the importance of creating a culture of cooperation and possibility. If we understand enough about what creates a sense of trust and well being at an inner level, we are giving ourselves the best chance of being effective at producing something tangible and enduring on the outside. In doing so, we are creating a community which is truly different in its values and practice to a culture of competition and profit at any cost to others. 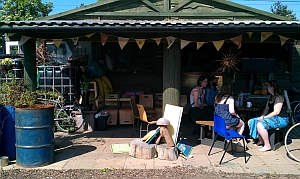 Social enterprise became a big focus for this group, and some existing plans and several new ones emerged, building on the potential of what they have achieved already. They were particularly interested in the REconomy project and had many ideas of how they might start enterprises that would create jobs and local resilience and benefit PinT in the bargain. For instance, there was an idea of a massage company as a social enterprise that could offer free massages at PinT events, both increasing the sense of well being at PinT events and gaining valuable publicity for the new enterprise. Another example was how produce grown at The Green Backyard could supply a cafe, which would then serve as a meeting place and publicize transition. The group especially liked our exercise of designing their awareness raising strategy as a social enterprise.

PinT’s great Unleashing is in a few weeks time, and I am sure they will build on the success they have already achieved to move to a new level of activity. It was a real pleasure and honour to work with a group who is so engaged in the process, willing to experiment with new tools, and able to work together to explore exciting new possibilities.

Join the next Thrive Training!

The next Thrive training is in Totnes on 16 – 17th June. There are a few places left, and already an exciting and international group of people expected – contact Kat to book a place; katharinabalassa@transitionnetwork.org.  If you would like your whole group to experience Thrive, as Transition Peterborough did, please contact Kat for details of how to make this happen.

I have a brother and sister in Peterborough and I lived there for many years myself. All the above blog I believe suggests no relevance to their existence in any way, shape or form. Who is this stuff aimed at?

This “stuff” is aimed at transition activists. If you or your siblings are interested in becoming part of this, I suggest you take yourselves down to the Green Backyard where you can expect a warm welcome.

If you’re starting new enterprises we’ll have sessions to help you at REconomy Project’s day at the Transition Network conference
https://www.facebook.com/events/300532413364824/
in fact in the spirit of self organising if you have sessions you’d like to host let us know about this, or anything else, on the facebook thread or at http://www.reconomyproject.org/?page_id=520

did sophy banks write a book titled the inner transition and psychology of change? i heard about it, but can’t locate it.