« An inspiring overview of Brazilian Transition at Brazil’s TEDx
It’s the June Transition podcast! Swapping crops in Berkeley, vegboxes in Kentish Town and a new garden for the Olympic torch in Saltash! »

“Why not?” indeed: breathing power into possibilities 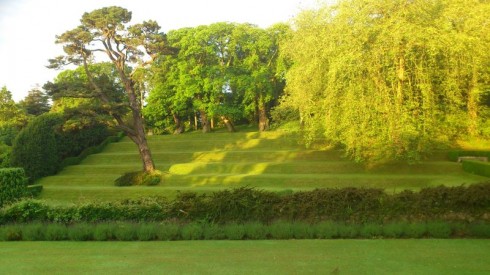 The centre of Manchester, where I spent last weekend, doesn’t feature a diversity of small, medium and large hotels and hostels in the same way that, say, Paris does.  So far as I could tell, there are just several huge Premier Inns, and huge Travelodges, massive, soul-less tower blocks with massive soul-less logos down the side.  As well as that, in the centre, virtually every shop is a huge chain, you know the ones, they now dominate every city centre in the country.  It’s like an episode of Dr Who, where the place has been taken over by huge leeches, sucking the financial lifeblood out of the city, what Andrew Simms recently called “extractive industries”, funnelling money to distant shareholders.  There are endless hideous new ‘iconic’ buildings, massive corporate egos in built form, usually home to just one organisation (such as the hideous gravity-defying monster below, surely a contender for James Howard Kunstler’s ‘Eyesore of the Month’?).  But on this day when many are celebrating ’24 Hours of Possibility’ (have a look, there’s loads going on!), how might it be possible to see beyond all that to something that actually nourishes us as individuals, communities and local economies? 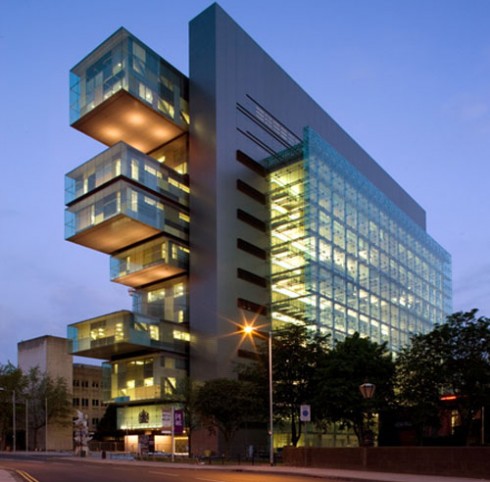 Walking around Manchester was like an immersion in a vision of a future that is spreading out everywhere as fast as it possibly can, not because we are collectively opting for it, but because it is being pushed through, imposed, steamrollered.  It feels unstoppable.  It feels huge.  It feels like the holding actions people up and down the country are taking against new superstores, new chain stores opening in their community that will displace, rather than create, employment (such as those in Totnes and Southwold), are futile and too small to make any difference.

Advertising and branding on the treads of steps, on tickets, above urinals, everywhere your eye rested for more than a few seconds, gave me a sense of how brands have taken over, how the push for growth at all costs is at the expense of our being able to live in a mental environment where we aren’t constantly exposed to advertising and branding.  It feels like we don’t have a hope, and indeed Rio+20, which starts today, seems to have already created an expectation that nothing can, or will, be done.

The Dalai Lama, the reason I was in Manchester, left Tibet in 1959, forced into exile by the illegal Chinese invasion of his country.  Since then, around a million Tibetans have been killed, the Cultural Revolution reduced the number of monasteries in the country from over 6,000 to 13, and a huge population transfer of Chinese into Tibet has led to a form of ‘cultural genocide’.  It is a tragic story, with those brave enough to demonstrate harshly repressed, political dissent resulting in torture and imprisonment, and a legacy of quiet desperation and sense that the world no longer cares or is interested, which is now finding expression in the 38 self immolations by monks and nuns in Tibet in recent months.  From a time about 20 years ago when it looked possible that China might engage on the issue of Tibetan autonomy, now it looks like nothing is happening at all. 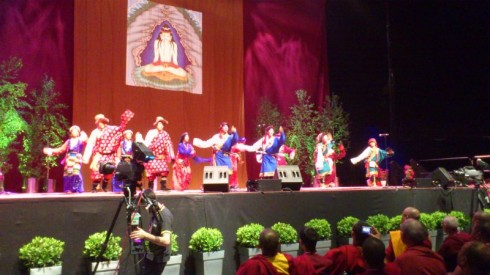 After Sunday’s public talk in Manchester, young people from the Tibetan community in the UK performed some traditional Tibetan dances.  One represented the unity of the three provinces of Tibet, U-Tsang, Kham and Amdo, danced in the traditional costumes of each.  It struck me as deeply poignant, that the dancers were young people born outside Tibet, whose parents have probably never been able to visit either, keeping these dances alive.  I wondered how long it was going to be possible to keep that culture’s rich heritage vibrant without it becoming a museum piece? 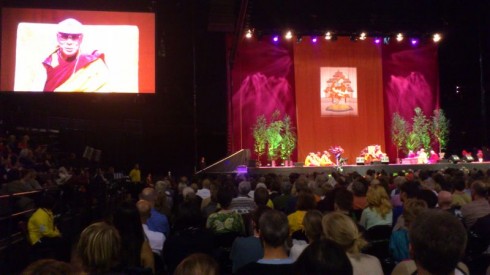 While the Dalai Lama was in the UK, he did an interview with BBC Radio 4’s Today Programme.  In it, he was asked whether he thought Tibet might ever be free again.  His response was “why not?”  He said that it may take decades, that he may not live to see it, and that his approach had always been “hope for the best, and prepare for the worst”.  In the past 15 years, he said, there has been a huge amount of change in China, and that human values and understanding are growing, and that a new generation of young Chinese are more open to ideas of change.  “Definitely things will change”, he said.

To most people the Tibetan situation looks hopeless, a unique and precious culture slipping slowly beneath an ocean of Chinese assimilation while the rest of the world strives to not upset China at every turn.  Yet to him, what matters ultimately is that our motivation remains good, that while action is vital, it needs to be underpinned by compassion, by kindness, by care of others.  He has no way of knowing if he will ever return to Tibet, if Tibet will ever regain any kind of autonomy.  Indeed, it is very similar to the way that once a town or city has been taken over by supermarkets, chain stores and huge chain hotels, it is almost impossible to imagine it will ever be able to claw back its autonomy and its independence.  Manchester city centre felt like it was completely dominated by corporate businesses in such a way as to be complete irreversible.  Yet it wasn’t always like that, although for many that is their living memory.  Likewise, young people growing up in Tibet now will assume it was always like it is now.

We have no way of knowing that we can turn our growth-fixated, fossil-fuel hungry, carbon-intensive, bigger-is-better culture around in time, or at all.  Will be able to successfully tell a new story in time, one that sits alongside, and is more compelling than our two existing ones of austerity or just borrowing more money, both in the relentless pursuit of growth like it used to be?  We have no idea if we can prevent the worst case climate scenarios, or whether we can build resilience into our communities in time for the rapid changes unravelling around us.

The Tibetans have no idea either if home will ever be home again, and the indications get worse every year.  The same is true for those of us working to make Transition happen.  But what matters is that we continue to work, to work hard, to work with kindness and care for others, building coalitions, sharpening the tools we have, pushing ourselves out of our comfort zones, seeking out the best advice and evidence to support what we do, telling inspiring and moving stories, working with passion, commitment and love for the work. 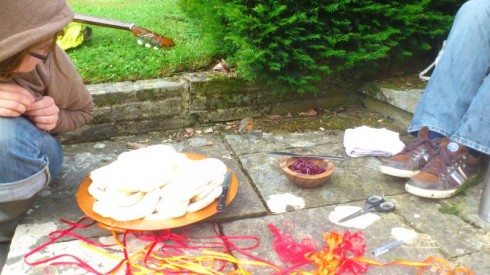 The robin who joined us for an early breakfast at the beginning of the 24 Hours of Possibility in Totnes.

As part of my celebration of 24 Hours of Possibility I was up bright and early this morning, meeting a group of people up on the Dartington Estate in the beautiful early morning sunshine, and when we talked I reflected on these questions.  When you’re up that early, you almost feel like it’s your day, that you somehow brought that day into being, that its possibilities are whatever you decide to design into it.  You feel as though you have somehow shaped the day from clay and breathed life into it and sent it off flying into the morning sky.  We don’t know if we will turn things around in time, if we will have any impact, if we will muster the energy and the skilful means to enable us to turn things around.  But it is possible.  As the Dalai Lama said, “why not?”

I was left wondering whether as the global movement for change grows, whether through Transition, Occupy, whatever, it’s slogan that might appear on t-shirts and banners might be, rather than “we are the 99%” which Sharon Astyk so beautifully took to task recently, might be “why not?”  Why not indeed.  It would be a great slogan to take to Rio +20.

Thank you Rob. Coming home on the train I met three Lancaster Transitioners who had been to hear the Dalai Lama and had spoken with you. They came away replenished with hope, and shared it with me.

It was so interesting, a relief, if disheartening to read such an assessment by a visitor, of Manchester city centre, where I have lived for over 20 yrs. Many of us, involved in various community, economic and environmental groups, have campaigned hard for the regeneration budgets to include elements that would have made the centre of Manchester feel less corporate, more congenial to small businesses. Apart from the Northern Quarter, it does not feel that the Council has much listened to those small voices and has acquiesced to the corporates. Yet Manchester Council had an ambition to make it the Greenest Council in the UK!
However, along with the Dalai Lama & Rob, we will hold onto the vision of a fairer, more sustainable society and take comfort from the the ideas and company of others who share that too.

Thanks Brigid, good to know that you share that perception! Thank you for sharing your thoughts with us….

This perspective Rob, this vast viewpoint while remaining precise and present, speaking with fearless clarity about unspeakably painful human ignorance without reqarding yourself (or us) as victims, this context of planetary citizenship… how is it learned? How is it shared? And why not? Notwithstanding, I feel inspired by your steady persistence. Thank you.

Thank you Rob. As one who is increasingly overwhelmed by all of this destruction (of communities, landscapes,cultures,people) I too was left the weekend with a renewed feeling of possibility. And when you think about it with good motivation, patience, persistence, courage, and interconnection the force is bound to be more powerful than that of greed, fear and self grasping. Indeed why on earth not ?

The ebullience of the Dalai Lama is like your own. He determines to find hope and joy in every day. I always notice that Transition is as much about living each day well as being mindful of the many threats facing us. It is inspiring to read your blog. Thank you for communicating your thoughts and ideas.

Poetry in motion
of e-motion
through heart
and insight
sets a tone
for the vision
“Why Not?”

Thanks for poetry, Rob,