« My contributions to ’50 months to save the world’
What to do with this year’s bumper harvest of snails … snail soup? »

An interview with Silke Helfrich: “We have to reformulate the role of the state as enabler of the commons”

The other interview I did at the Degrowth conference in Venice recently was with Silke Helfrich, one of the editors (along with David Bollier) of the excellent recently-published book ‘The Wealth of the Commons:  A World Beyond Market and State‘, a collection of 73 articles by activists, academics and project leaders (I wrote one on resilience) on the theme of the commons.  I recommend it.  Silke gave a fascinating presentation at Degrowth 2012, so one day, after lunch, I caught up with her and asked to her to tell me more.  Here, as usual, is the audio should you wish to listen to it, followed by the transcript.

So Silke, you’re one of the editors of ‘The Wealth of the Commons: a world beyond market and state’, and you’ve been talking here at the Degrowth 2012 conference about the commons and why for you the commons is such an important aspect of Degrowth and where we go forward from there. Could you give, for people who don’t know what you mean by that term, the commons, a basic sense of how would you explain it to somebody in a lift? 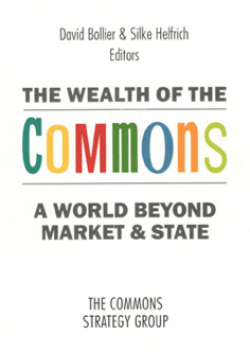 A lift in a very tall building! Usually people think about the commons as if the commons were just a resource, like the forest or the water or the land, digital code or culture, something we have to share. But actually the commons is based on the notion of community or networks, because today we are able to collectively build and construct and manage commons all over the globe through new technologies.

That means that at the very heart of the commons is the notion of social relationships.  How do we relate to each other regarding the resource we have to share somehow because, as we know, in terms of natural resources, there are absolute limits. If you want to respect them, we have to limit access in a fair way.  So the commons is about sustainability, sustainable use of natural resources and sharing in a fair way.  It’s about sustainability, fairness and social control of the uses.

How we get there is through what we call a process of ‘commoning’. There is a famous sentence by the American historian, I guess he wants to rewrite his life’s project as to rewrite the history of humankind from a commoner’s perspective, his name is Peter Linebaugh. Peter Linebaugh coined that famous sentence ‘there is no commons without commoning’.

Where do you see the commons as an idea emerging in the world at the moment?  It seems like in places like Greece and Italy where the financial crisis has been very grave that they’re actually moving in the other direction very fast and selling off key assets to foreign investors as a way to raise some money. Is there anywhere in the world where you can see a movement towards the commons?

Actually once you put the glasses of the commons on, you see it all over. It’s obviously very present in history, and it’s obviously very present in the management of collective natural resources like forests and land and water in the South. For instance, all the forests in Nepal are managed by the communities who need the resources of the forests to make a living. About 60% of the land and forest in Mexico, which is a huge country, are managed by Comunidades Agrarias, or the so-called ejidos which again is a commons-based way of reproduction of livelihoods.

The seeds we all use and the huge variety of seeds we need to defend from climate change and to produce locally adapted food, has been based on commons management for centuries.  In the same way we see today in the way we relate to culture, ideas and code, there’s a new movement popping up where actually a commons-based approach is out-competing the top-down way of production and commodification of culture.

Yes… I gave a speech here at the Degrowth Conference and I showed two pictures to the people. One is a screen grab of the website of Encyclopedia Britannica.  They sell each product or article of the encyclopedia for £49.95 or so, and I asked people – when was the last time you bought such an article or the knowledge from the Encyclopedia Britannica?  Nobody raised a hand.

Then I switched to another image which was Wikipedia. When was the last time you used Wikipedia? Everyone raised their hand. Which basically means that in common, collectively using open and free platforms (free as in freedom and not as in free beer), we can produce very, very complex things. Like encyclopedias in more than 250 languages. Nobody would have believed in that ten years ago!

So this way of commons-based peer production is showing us that we have to stop believing in the same categories and incentives and ways of production we are used to. In order to link fairness and sustainability, and fairness for instance in the cultural commons means open-access so everyone can contribute and take out of the commons. Fairness in the natural commons means to put limits in order to respect the absolute limit of the natural resources, but defined by the community and managed by the community and even sanctioned by the community themselves.

Intellectual property still has an important role to play for us because that’s the way we function today. Just to give an easy example, authors and composers and so on are usually being rewarded based on a share of the intellectual property rights. Usually a small share but a share nonetheless. They used to think that they can only make a living if they keep their intellectual work and sell it on the market. 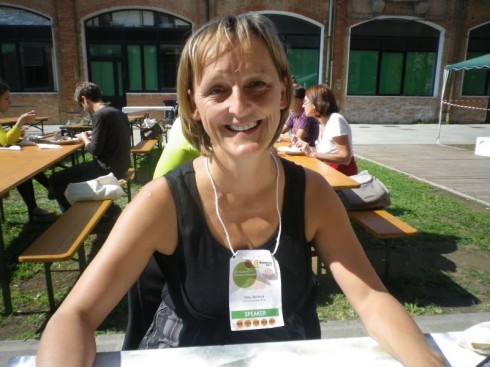 So we have to show that in the commons there is a way of reproducing and distributing knowledge and sharing knowledge, and find other ways of refunding and rewarding the people who contribute to that.  I think there are lots of ways to do so, from crowd funding to substantial cultural funding of our public budgets to co-operation with private foundations. There are many, many ways to reward our work and there are lots of people co-operating with the creative part of our society without going through that needle of intellectual property rights.

I guess some people might argue that the way things work at the moment, where you have an economy which is based on private ownership which is based on maximising profit, what then raises sufficient taxes to fund things like the National Health Service and education? In a commons-based society, which presumably would be a less-profit driven, less profit-generating economy, how do we sustain those vital functions that the state is able to provide at the moment?

Actually, people will argue like this, but they will see at the same time that it doesn’t work any more. Precisely, how can you link this argument to what we are seeing in fact, that we are living in a period of austerity and of dismantling the social or the welfare state, which, by the way, is only existing in a very small part of the world…. basically Western and Northern Europe.

We mustn’t forget that commons is able to explain and nurture also as a discourse social practices and realities all over the world, because that is the way people have always tried to make a living, just using the resources in the place where they live, and try to make collective decisions in order to reproduce them and to make a living. This is one argument and this argument is not meeting the facts of current economic and political affairs.

The commons is not the pretty and happy small world in which communities and people are committed to each other in their communities. The commons is at least as complicated as life itself, so there will always be conflict in it and especially in big, complex resource systems there will be a need to mediate those conflicts with the help of bigger institutions. The state can enable commoning, mediate conflict in the commons, can be the steward of complex resource systems which are, and this is important to understand, the commons cannot be tied to the concept of nation state.

Because, for instance, a lake doesn’t care about national borders, or the air doesn’t care about national borders either. So we need to inscribe the principles of commoning: fairness, no over-use, no under-use, reciprocity, relational principles, into the very institutions that steward the commons, the state should do that.  If we move away from thinking about redistribution only in terms of the money economy, we will find a lot of possibilities to redistribute health, wealth, time, social spaces, natural resources and cultural resources.

That is what the commons is all about. It’s not about money, it’s about how to provide a fair share beyond the market, and money, and therefore growth-driven economy with new and innovative institutions. Therefore we may rely on the state that usually empowers competition, enables competition. We should instead convert it into a state that makes co-operation and commoning easy.

Assuming that commoning is something that needs to start from the ground up and people showing by example, I wondered what your thoughts are for Transition groups for example, who are working on the intentional and active localisation and resilience-building of the places where they live. What would it look like if they started to really embody the concept of the commons in what they’re trying to do, if it became one of their founding concepts?

For me there are two very strong notions and realities in the Transition Town movement which can help the commons to thrive. The first is that insistence and relying on local resources, because the commons, or commons resources, are not those resources nobody owns. The commons is always everybody else’s commons. That means we have to care for the limits of the resource we can legitimately use in order not to harm all the people of future generations.