Skilling Up for Powerdown – a Day in Dublin

Thirty people gathered at Dublin’s Cultivate Centre on April 20th for a World Cafe facilitated event called ‘Skilling Up for Powerdown’. The day was part of the Convergence Festival “Learning to Live with Less Fossil Fuels”, and was billed as “a community energy descent planning conference”, the first such event ever. The day was ably facilitated by Tara and Micheal from Second Nature, and was very productive, raising many ideas and insights which I will touch on in forthcoming posts. 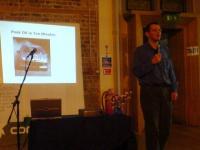 It began with an introduction from Tara as to how the World Cafe approach works. She stated that the purpose of the day was “to plan how communities can thrive and prosper after peak oil and through energy descent”. I then gave a brief 10 minute overview of peak oil, which led into the initial icebreaker conversation, “is peak oil a crisis or an opportunity for communities?”.

Some of the thoughts that arose from this conversation were; whether or not we will need to sell powerdown to people; one person used the phrase “the shit sells itself” – in order for most people to engage in the process will probably take a crisis – peak oil of course is both a crisis and an opportunity, we can’t ignore the fact that there is a very big crisis in there… – will Peak Oil have a bigger impact on cities or rural areas, we imagine the cities but during the Famine the rural areas were worst hit – the ability to see it as an opportunity depends on good communication – will lead to a resurgence in and a revaluing of farming – emergence of biofuels – new local economies – industry will suffer first and trigger unemployment, need to be prepared for that – could create panic if Government is not prepared

Then I gave a 15 minute overview of energy descent, starting with David Holmgren’s graph showing four possible ways forward from the peak, techno-fantasy, green-tech stability, earth stewardship or Atlantis (these four scenarios and reflections upon them will be the subject of a post in the near future). I talked about visioning, the energy descent planning concept, the experience of the Kinsale Energy Descent Action Plan and the evolving process in Totnes. This led to my offering the second conversation starter, “How relevant is the energy descent model to me and my situation?”

Some thoughts raised during this conversation were – that at the moment the issue still isn’t on a lot of people’s radar, so we need to do a lot of awareness raising ahead of or alongside an Energy Descent Plan process – that there is a need to work on collective values – that a foundation was to look at how to rebuild social capital – the need for the process to start with everyday basics like how can we heat our homes, starting with where people are at – the need to identify basic needs and data at an early stage – at the moment still to talk about intentionally contracting the economy would be seen by some as ludicrous – people need to see things to believe them, the process must have high profile practical elements to it – the process needs to show by example that another way is possible – any such process needs to tackle the myth that “they” will sort it out – has to promote a high quality lifestyle – very difficult to do in places with transient populations, i.e. lots of people renting, makes it hard to define community – people need to see it to believe it – Kinsale is a very particular kind of place, how universally relevant is it? – we need new definitions of ‘success’ – the plan needs to have ‘hooks’, attractive parts that can draw people into the wider process – need to engage community leaders

After lunch Graham Strouts then talked about communication, and how peak oil would affect every aspect of our lives. One question he invited us to think over was “what do we actually want energy for?” Do we want to use a dwindling resource to repeat the mistakes of the past? His conversation starter was “how do we communicate community responses to Peak Oil, both within and between different communities?”

Some of the thoughts this raised were; the need to draw in a wide range of groups, Young Farmers, church groups, schools, Fair Trade groups, the Women’s Institute (or the ICA in Ireland), need to involve community leaders, use local newspapers where possible, find the Mavens (a concept from Malcolm Gladwell’s book ‘Tipping Point’) who are the people who seem to know everyone, harness innovative technologies such as wikis, set a personal example, there was debate about whether fear is a legitimate tool to use to prompt change – Open Space/World Cafe and other participatory methods 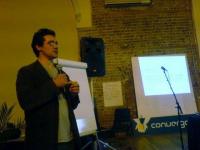 Finally Davie Philip of Cultivate talked about education and training, and his thoughts around how we can actually help people to acquire the skills they will need for Powerdown. Modelled on the very successful FEASTA Toolkit which Davie helped develop, he had just got funding to develop a Skilling Up For Powerdown toolkit, which people will be able to run anywhere. He spoke of the role of blogs, wikis, and other multimedia, like film and audio files. He is off to the Peak Oil/Localisation conference in New York and will try and interview as many of the speakers as he can and some of that material will feed into the course. His conversation starter was “What are the skills we need to learn and the training and education we need to put in place to respond to Peak Oil?

Some of the responses to that were – the importance that education start from people’s life experiences – need for innovative learning tools, like the Teaching Permaculture Creativity model, using games, visualisations, role play and so on – research into how what skills people had 30 years ago and what skills people have now, might open up new areas to teach that are outside what we currently imagine – we need to be training community leaders and field workers for the Energy Descent process – perhaps we need more celebrities and high profile people taking a lead – start with what affects people, i.e. health and energy issues – basic DIY skills – the urgent need to demystify energy and help people become energy literate – involve older people so they can pass on their skills – courses for schools – practical courses such as building solar panels – basic self sufficiency

The notes above are not in any way comprehensive, they just give a flavour of some of the points that emerged. I found World Cafe a really useful process. There is a great free booklet on what it is and how to do it here. I have only been involved with Open Space until now, World Cafe has a different flavour. It lacks the glorious, chaotic self organising aspect that Open Space has, but it does allow you to add in new information and challenges during the day. Tara and Michael were very clear that the key is developing good clear conversation starters. I thought the ones we had worked well, but I think Tara felt they could have been a bit more thorough somehow.

It did seem to me that some of the groups I was in were happy enough to have very general chats about peak oil and what to do about it, rather than focusing on the real meat of the question. I did try hard to keep bringing the groups that I was in back to the point, and when that happened the discussion was very useful. Our hope had been that the first ice-breaker about peak oil – challenge or opportunity, would have got that out of people’s systems, but actually my sense was people could have happily talked about that all day! Each table needs a table host who stays at the table to brief newcomers as to what has already been discussed there. It felt to me like each of those people really needed to be quite ruthless if the aim is to get people to really explore the point. The Cafe style setting was very relaxed and informal and allowed people to feel comfortable in sharing their thoughts. By the end of the day I had got to talk to everyone in the room, probably more than once.

I found it highly enjoyable and it raised lots of ideas that are very helpful in the further shaping of this process. It was great to see such enthusiasm for this work, it was very affirming. Thanks to Davie and everyone at Cultivate for organising it, to Tara, Michael and Graham, and to everyone who attended. And thanks for Mark O’Sullivan’s mobile phone for most of these pictures…