Why Nuclear Power in not a Solution to Peak Oil – Part 4. How do you propose We Clean Up All The Mess? 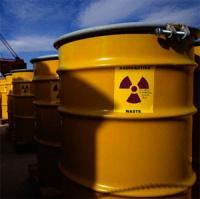 I’d like you to imagine yourself about 50 years from now, in a post-peak world. We are assuming for the purpose of this post that everything more or less worked out OK, we managed to contract our economy and our consumer addictions to a point where our quality of life is much improved, where we live in local economies, with local food, local products, local currency and so on.

We manage fine on less than one-quarter of the fossil fuel that we managed on in 2006 and are continually devising ways of managing with less. Cement production is now minimal as it was just too energy intensive to sustain, and very little new steel is created. Not so much new building happens these days, what does happen uses mostly local materials, clay, timber, hemp, straw, lime and so on. Imagine in this world you are faced with the challenge of keeping 250,000 tons of radioactive waste safe into perpetuity (that’s the amount already in storage in the UK, plus what will join it when the UKs current plants are decommissioned, never mind any new ones). How are you going to do it?

Nuclear power has always been predicated on the concept that future generations will be more capable than we are to deal with nuclear waste. The logic runs that they will, by that time, have cracked how to make it safe, and so therefore it is fine to leave it as some kind of intellectual puzzle for them to figure out. There is however a very strong case that we are about as technologically advanced as it is going to get. If not, we are at least the generation with the most cheap oil at our fingertips. Future generations will not have the dubious luxury of being profligate with fossil fuels as we have been. To saddle them with a legacy upon which they will need to expend vast amounts of a precious resource is insane.

How will we maintain the storage facilities to keep them safe? In 50 years time, will we be seeing hoardes of people heading to Sellafield with straw bales, cob and lime putty to fill the cracks? Despite James Lovelock believing that nuclear waste is so safe that he wouldn’t mind if some were buried in his back garden, it is clearly not that simple.

Last week, the Committee on Radioactive Waste Management (Corwm) recommended that an underground bunker be built to house the worst of the UK’s existing mountain of nuclear waste, as well as material produced by any new reactors. Their draft statement read “Corwm considers deep geological disposal to be the best available approach.” They have yet to deliver their full report, but it is in essence it is a stitch-up, allowing the Government to tick their “we have to be able to convince people that we have a safe waste disposal option sorted” box, paving the way for a new generation of plants. “The best available approach” is hardly a ringing endorsement. Hardly the same as “the ideal option” or “the perfect solution”. The electric chair might be the ‘best available approach’ to carry out the Death Penalty, doesn’t make the Death Penalty a good thing…

It is estimated that on average, people in Britain live only 26 miles from a major radioactive waste site. Perhaps the ‘out-of-sight, out-of-mind’ approach that deep burial enshrines is not the best way to approach the problem. Maybe actually leaving it where it is will engender a more responsible approach. Joanna Macy has introduced the concept of ‘Nuclear Guardianship’. She writes that what is important is that in order to be properly looked after, nuclear waste has to be left where it is. Burying it deep underground makes it impossible to bring out again if it has problems, and it is very very unlikely that it will remain where it is put for 10,000 generations without leaching into groundwater and so on. We can’t even conceive of timescales that long.

She writes “the poison fire (her term for nuclear energy) needs to be kept visible at ground level, so that people of the future know where it is. It has to be retrievable for monitoring and repair of the containers, or for re-containerizing it, which can be done relatively safely. We have the technology to do monitored retrievable storage. The only reason that government and industry and the public at large doesn’t conceive of this is because we’re unaccustomed to thinking of long periods of time – and because we try to put it on a balance sheet”.

David Fleming in the recent FEASTA paper on nuclear energy looks at the energy implications of storage. He writes “the task of clearing up this lethal detritus will require a great deal of energy. How much? That is not known, but here is a very rough guideline. Energy equivalent to about one third of the *total* quantity of nuclear power produced – in the past and future – will be required to clear up past and future wastes. And the whole of this requirement will have to come from the usable uranium ore that remains, which is not much more than half the entire original endowment of usable ore.

This means that, if the industry were to clear up its wastes, only about one-third of the present stock of uranium would be left over as a source of electricity for distribution in national grids”. According to his calculations this means that if the nuclear industry cleaned up all its wastes, it could supply the world with electricity for just 3 years. He concludes, “and remember, that this is no mere thought-experiment: those wastes so have to be cleared up; the energy required for this will reduce the contribution that can be expected from nuclear power from the trivial to the negligible”.

Of course the first and most urgent thing is to stop adding new stuff to the radioactive rubbish heap. It seems extraordinary now that scientists were able to convince politicians that it didn’t matter that they were creating the most dangerous and acutely poisonous materials known to humanity because they’d figure it out later. What a dreadful legacy. The members of the Committee on Radioactive Waste Management were basically asked the wrong question.

They should have been asked, how will future generations who do not have cheap oil and gas, and the high embodied energy materials that depend on them, manage nuclear waste storage? My sense is that had they actually been asked this more realistic question, they would have actually come up with a list of recommendations the first of which would have been “stop making any more”. As usual though with energy issues, you only get realistic answers if you ask the right questions.

David Fleming writes, “the disturbing prospect is already opening up of massive stores of unstables wastes which no one can afford to clear up”. We should add to that that even if money were not an issue, the sheer amount of fossil fuels and energy required to manage this legacy is already an unmanagable burden as we enter Energy Descent, to add to it would be madness.

Nuclear waste is a problem. That’s an understatement. I believe the UK has decided that our ~20 legacy nuclear sites will require £70bn+ spending on them excluding a ‘final’ solution for the waste. That’s some £3.5bn per site, a lot of work.

The thing is, what’s happening in the FSU? There are over 100 ‘legacy’ nuclear sites there which are certainly not scheduled to have several hundred billion pounds spent on them.

Either the UK is doing something unnecessary or the FSU isn’t doing something that is necessary. I suspect it’s the latter. So what is the implication of a decaying nuclear legacy in these poorer parts of the world ‘cos that’s what a new nuclear build in the UK would create at the end of life.

Why can’t we build reactors such as
the integral fast reactor ? It can use nuclear weapons, nuclear waste as fuel. It’s own waste can be reprocessed on site.. and what is left in the end, is not very radioactive, in fact, in a hundred years it ends up as radioactive as the original uranium ore. The design is not very conducive to proliferation, because the fuel in it gets quite radioactive, thus easy to trace and dangerous to anyone in close proximity. But still, spent fuel can be easily reprocessed.
Yeah, you’ll say it’s an unproved design,
but it has already been run once,
(before J.F.Kerry with help from other
brilliant thinkers sank it). It’s even
passively safe, that means, if you turn off
the thermal exchanger, which would cause a
Chernobyl like meltdown in normal reactors, it just cools down. And this has been tested.

Well, if mankind is going back to the Middle Ages
(presumably replete with stuff like tyrant warlords, kings, slavery, superstition, ignorance, bubonic plague, filth, old ladies being burned as witches, and other such things as tend to occur in medieval social contexts) then maybe the species is better off going extinct. (Gimme exposure to high-grade plutonium produced in fast breeder reactors over life as a stinking, illiterate, louse-infested peasant with a life expectancy of 27 years any day.)
Add that to the fact that nuclear power is one
of our only options for averting this collapse.
I say, keep working on developing efficient nuclear technology, and SCREW the miserable, primitive wretches our descendants will become, if we fail to keep civilization afloat. (Death via radioactive waste would be kinder than the fates most of them will suffer.)