The first proper speech of ASPO 5 was by **Dr. Colin Campbell**, and was called ‘Peak Oil in Perspective’. He began by talking about the history of ASPO, how it was born in Germany in 2000 as an informal network and now has organisations in 20 countries, the term peak oil has now entered the dictionary. Although there is a lot of work still to do, the fact that we are near the end of the Age of Cheap Oil is no longer in dispute. All times of transition are hard, but perhaps at the end we reach a better place. 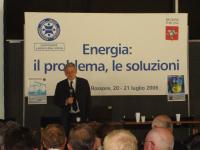 Others will discuss areas such as petroleum geology, ambiguous definitions of types of oil, the impact of technology, misleading reserve reporting practices, political responses and so on, but it may be useful here to get a larger perspective. In the beginning animals got their energy from their muscles, early people were the same, living as hunter gatherers. 10,000 years ago the first agriculture emerged, needed external energy in the form of horses and/or slaves.

This led to early forms of bartering. Then someone found a piece of gold and exchanged it for a sheep, gold’s scarcity opened up a new world of power. Kings mined gold for the power it gave them. Rome paid its mercenary soldiers with silver from the Rio Tinto mines in Spain, but then the silver mines became exhausted, the Roman Government were unable to pay their army and the Empire collapsed.

It used to be that debasing a currency was a crime, but this is no longer so. Gold is heavy to carry around so people began to issue receipts. The banks then began making money from thin air, based on faith that tomorrow’s expansion would cover today’s debt.

Then a new energy source emerged in the form of coal, which ran steam engines and trains, leading to rapid expansion of the Industrial Revolution. Then the Oil Age dawned, expanding industry, transport, trade and the financial sector. Oil is unlike other minerals, it has a polarity, either it is there in profitable abundance or it might as well not be there at all, it is all or nothing. The human population grew in parallel with the oil curve. 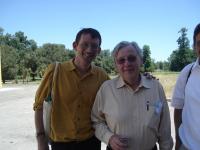 Slavery was an ancient practice that ended when oil replaced the slaves, however debt created new form of slavery, poor nations need to export in order to service debt, for example, all oil revenues from Ecuador are used to service their debts to the West.

Classic flat-earth economists assert that supply must match demand in an open market, and also that one resource seamlessly replaces another as the need arises. Both of these have been proved to be incorrect.

The Turning Point. The gap between discovery and production is now continuing to widen. The same pattern can be found in country after country, from peak of discovery to peak of production is around 40 years. This pattern was even found in Russia, which had a very different political environment.

So the second half of the Age of Oil now opens before us. The date of the peak itself is irrelevant, what matters is the vision if a long decline of around 2-3% each year. Soaring oil prices that we are seeing now reflect capacity limits and profiteering from shortage. The price will continue to rise until a recession dampens demand. We can see that the oil companies are profiteering, as their production costs have barely increased.

We are now seeing a new geopolitics, an energy-rich Russia, energy-depleted UK and USA, an energy-hungry China, and an energy rebellious Bolivia and Venezuela. This all represents a threat to the US financial empire.

So what are the tensions of transition? One is whether or not this tension will trigger a stock market crash. All the companies are overvalued, which is assuming business as usual in terms of energy. Does this spell a second Great Depression? There are a few ironies around the whole depletion area. Firstly that better technology actually accelerates depletion. Secondly that it is very hard to produce oil on a battlefield.

Peak oil will likely lead to reductions in trade and a return to regionalism, possibly to the end of the nation state. Will power return to the regions? We can already see local currencies beginning to emerge.

So what would the intelligent response be to all this? The first would be the Rimini Protocol, whereby signatory nations would cut imports by 2-3% each year. Demand would then match supply on a global scale, and it would keep developing nations, some of whom are being priced out of the market, afloat.

It is time to face the reality. We must inform the people. We must cut waste, which is monumental and unrecognised. We should turn to renewables and possibly to nuclear, and we must live differently. We may rediscover a sense of happiness, at the end of the day what else matters? He then showed a great picture (see left) of an elderly farmer in Connemara in Ireland who Colin once met, who Colin compared with the baggage handlers and security people he saw at Stanstead on his way to ASPO. Which is the happier he wondered?

A future bishop may thank God for lifting the curse of the age of oil, which distorted natural order, destroyed biodiversity, ravaged society and so on.

*As a follow up to Monday’s post about the two distinct paradigms visible within ASPO, it is worth noting that Colin Campbell, as Chairman of ASPO, does an amazing job of straddling both paradigms, firmly keeping a foot in both, and thereby keeping them both on board within the organisation. He does this very skillfully, allowing both to feel included in what is a very broad church.*

Colin Campbell is fantastic. Where would this debate be with him?

Colin has made a tremendous and useful impact in the area of Peak Oil. I must congratulate him for his fine work.

However, regarding the man with the wheelbarrow. First, at all times now and in the future, people still have the option of using rudimentary tools like the wheelbarrow. That they have chosen not to do so speaks volumes about the importance of fossil fuels and the difficult transition that we have in front of us.

Second, he is probably smiling because he is pushing a small wheelbarrow and it is only half full. I spent part of my late teen’s pushing a much bigger one that was twice as full of rocks in the hot sun. Heavy manual work is ‘fun’ only up to a point. Most people today in the West do very little of it.