« Communities, Refuges, and Refuge-Communities – a Survivalist Response by Zachary Nowak.
An Enticing Taste of Albert Bates »

Transition Town Totnes – The Story So Far by Naresh Giangrande. 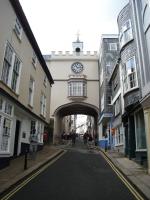 *My TTT colleague and fellow peak oil activist Naresh Giangrande wrote this piece as notes for a talk he gave to Totnes Friends of the Earth last night, and I felt it gave such a good overview of the project and what it is doing that I asked him if I could post it here. Naresh runs Living on the Cusp, and runs workshops around the country on preparing for peak oil.*

Transition Town Totnes began the with understanding that we are facing imminent social collapse. Not the slow but steady social collapse that FOE, Greenpeace, the Club of Rome, and others have been warning about for decades now, but imminent. That the time for action is now, and that external events global world changing events will, at times, overtake this process, and will drive this process.

As Joanny Macy puts it;

>“until the late 20th century, every generation throughout history lived with the tacit certainty that there would be generations to follow. Each assumed, without questioning, that its children and children’s children would walk the same earth, under the same sky. Hardships, failures and personal death were encompassed in the vaster assurance of continuity. That certainty is now lost to us, whatever our politics. That loss, unmeasured and unmeasurable, is the pivotal psychological reality of our time

Very interesting idea, non-linearity! We are working with pebbles now to get an avalanche moving.

I’m seeing some signs of rolling in the community college I work at- and an excitement as various people “get” some new facet or even a big piece.

The videos, such as The Power of Community, Global Gardener, Forest Gardening, The End of Suburbia, all are very helpful in this regard. Getting such videos into libraries, or even into personal libraries like my own, and then circulating them is very effective.

[…] Transition Town Totnes – The Story So Far by Naresh Giangrande.My TTT colleague and fellow peak oil activist Naresh Giangrande wrote this piece as notes for a talk he gave to Totnes Friends of the Earth last… You can leave a response, or trackback from your own site. RSS 2.0 […]