« Competition Winners Announced!
£100 to fill up the tank? Just get used to the idea… »

Why I Love Diggers 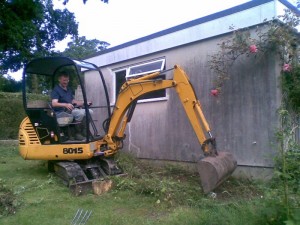 I guess, as what Albert Bates terms a ‘post-petroleumologist’, you would imagine that I would be philosophically opposed to diggers, earthmovers, and other forms of fossil fuel powered equipment. I think it would be fair to say that until I encountered permaculture, I saw them, mostly due to seeing the extraordinary damage that such machines can wreak on road-building protests, as inherently wicked. When I sat down to read Bill Mollison’s Permaculture, a Designer’s Manual, I was surprised to find that a book on earth repair had an entire chapter dedicated to earthmoving. Seemed somewhat incongruous. Now, however, I am a convert, and I was honoured that my garden was visited by one this weekend.

Mollison states that “earthworks are necessary and ethical where they;

The power of earthmoving is extraordinary, unimaginable for our ancestors, for whom any earthmoving was powered by muscle rather than by the internal combustion engine. Clearly as tools in the hands of those who want to put profit before care of the Earth, they are hugely dangerous weapons. In the hands of those wanting to create sustainable land-based systems, they can be fantastic. 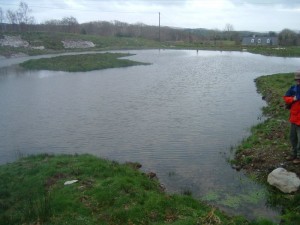 When I lived in West Cork, I was lucky enough to be around some projects which really impressed on me the utility of a well-used digger. Indeed, seeing a skilled digger driver at work, the digger arm becomes an extension of their body. My friend John Dolan, the master pond-builder, used diggers to create amazing water bodies, and to sculpt landscapes in such a way as to maximise their long term productivity, such as the beautiful pond create in what had previously just been a boggy field you can see right.

Another friend Tom, who is building a house also in West Cork, has done wonderful terracing and earth sculpting on his site. The site has been designed so as to maximise south-facing productive space while at the same time minimising run off of soil and nutrients. By applying the intelligent design in advance, diggers can be judiciously used to create landscapes best prepared for the challenges of maximised productivity and resilience. In the long run, the site development work Tom did has greatly increased the site’s potential output, as well as enhancing its beauty. 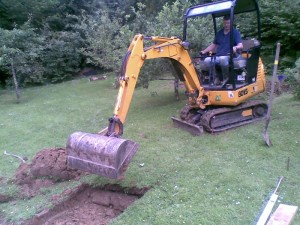 My weekend earthmoving was nothing on the scale of this earth-artistry however. Basically I am going to be putting a lean-to-greenhouse up in a couple of weeks (very exciting, I’ll keep you posted), and so I needed the site cleared and levelled, something that would have taken me a fair old while with my shovel… . I am also putting up fencing for chickens which needs a trench for the fencing to keep foxes out, and I’m adding to my raised beds. A local guy who has a minidigger came along for a few hours and levelled and dug and moved soil around … had I set to with my shovel, it would have taken me days to achieve what he did in a few hours. As part of my long term strategy of my back garden becoming an intensive food production system, it felt to me like a worthwhile investment.

The guy with the digger told me that his machine did the work of ten men, and I can believe it. Sometime to look at the move to a low carbon as a steady journey in a downward direction is to oversimplify. Given that we have moved so far away from using land productively, there will be a need to repair landscapes destroyed by modern development and reclaim them for food production, aquaculture and so on. Breaking up the tarmac to allow the soil beneath to breathe once more. Enabling the use of local building materials such as clay. In terms of identifying what we do with some of the remaining hydrocarbons, there is certainly a role both for their intelligent and sparing use in developing the intelligently designed landscapes a post oil world will need, as well as in measures needed for climate change adaptation. It is what David Holmgren calls ‘Transitional ethics’, that is, the doing of things that may not be what we want to see in the long term, but which best facilitate our getting there.

Exactly right. We’re about to attempt to build a “dugout-soddy” poultry house, here. When built, it should be good for 100 years, with minimal maintenance, and provide the birds a cool sanctuary in hot weather, and keep them far warmer in our harsh winters. Attempting to do it entirely without machines would be beyond our capability- though I’m envious of the fact that in China, out in the country where villages are still functional, a village could put one up with hand labor in a half a day, using a mere 50 people.

The other machine that is critical for me is the chainsaw- built my house with one; which I bought immediately after cutting down my first large tree with a hand saw.

We just need to keep in mind- these tools have no conscience of their own; and their power to do good work is exactly the same as their power to create destruction. They are very powerful.

Good to see principle not getting in the way of practicality.

Presumably the digger could be fed with veggie oil. Then the question would be, would it use less food equivalent than the human/animal workforce that would be required in place of it?

Presumably the foxes won’t be too put out 😉

One must be careful with these tools because they us give the possibility to implement quickly and irrevocably some ideas that can be ultimately bad.
An experienced designer may use them well, but a beginner (like me) will not think differently if he/she can use this kind of shortcut.

I would think that diggers would also work well powered by electricity, as the electric motor offers plenty of torque and the shorter range of an electric vehicle would not be an issue.