« The New Absolutely Brilliant Transition Network Website is Here!!
An Interview with David Orr, author of ‘Down to the Wire’. Part Three. »

An Interview with David Orr, author of ‘Down to the Wire’. Part Two. 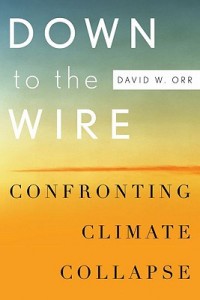 Are there any dangers inherent within the concept of relocalisation?

With my students, we talk about all these gee whizz environmental solutions and so forth, I want to get them to think about the dark side of what can happen, because I think the ‘happy talk’ view of humans is quite dangerous. I think that there are clearly ways in which Transition Towns and the local sustainability movement could become parochial and in my part of the world we have a history which shows that small towns can be vicious, mean places. In the 1880s until recently, lynchings we not uncommon.

The trick I think with Transition movement in this sense, is going to be to build in the mechanisms whereby people become more tolerant and open, although more constrained for fuels, electricity and so forth, but that we don’t create violence or parochialism, no matter how sustainable or otherwise. So I think the network idea was brilliant, to bring people in and create a movement. To have towns networked across the world that are part of this larger cosmopolitan dialogue of human presence in the world, and recognising that a Transition initiative is going to be different in Southern India, and in Indiana, and in Totnes, Frankfurt, Dusseldorf, Japan and China. But the basic questions are all going to be the same. How do we build, within the parameters of nature, and do it fairly, decently, sustainably, resiliently, openly, and with compassion toward everybody? So intolerance has to be bred out of everyone!

As this dialogue goes forward I would love to help foster the mechanisms whereby Transition Towns stay open and cosmopolitan and not parochial. The enemy here is fundamentalism, and the problem is you can have technological fundamentalist, economic growth fundamentalist, you can be a New York City cosmopolitan fundamentalist! It wears lots of different faces!  That’s a great question though.

What is inner resilience? Why are some people more resilient than others? What does it look like if a community encounters shock – the population doesn’t just all go crazy and run round looting and stabbing each other, how does one help build that sense of compassion and flexibility and adaptability?

I think regarding the resilience you’re looking at in the face of catastrophe, I think we know three things that are important:
One is that catastrophes are coming. We don’t know the dates yet but we do know that the system is coming under increasing stress. Reserve stocks are way down, there’s a big drought in the American Midwest, and those stocks drop to below zero and there’s no slack in the system, so it’s going to be hand to mouth.

Secondly, civilisation is only nine meals away from anarchy. We know that no matter how good the intention is, however good people are, if they’re hungry, saints will turn into a mob. Get them hungry enough, turn the water off and the electricity off and you’ll cause panic and social psychology and biology take over.

Thirdly, I think it means that Transition Towns need food policy instead of relying on large-scale storage. I think networks of people, not just a town, let’s say in the Totnes area, between Devon and Cornwall, there needs to be a discussion about how go begin to stockpile food for bad years, or at least begin to talk about this stuff. Because if we’re reliant on large-scale systems to feed us, I think we’re kidding ourselves.

This debate was more alive in the Seventies than it is today, in terms of awareness of fragility and vulnerability, what Amory Lovins called ‘brittleness’ in systems. It doesn’t take really severe shocks to crack the system open. Roberto Vacca, an Italian systems theorist, wrote a book in the Seventies called The Coming Dark Age, and other authors wrote along the same lines during that period of rising awareness in the Seventies, it was part of the dialogue, that this could all come undone. There was a lot of thinking about how one event could cause it to unravel, a terrorist event, two Katrina-scale event…

I was on a panel once, sponsored by the CIA to think like terrorists. My team had to think like terrorists. The second team had to try and figure out what we came up with and what to do about it, and the third team and the third team (inaudible) and the three teams never talked. My team had to come up with the most heinous possibilities for terrorism, and we did, and they haven’t happened yet, but there’s no reason why they couldn’t. One plane loaded with high explosives could shut down the United States. The results of that panel were never published, but the fact is we’re vulnerable.

Naomi Klein’s book ‘The Shock Doctrine’, is one of the best books around, because what she did was to put her finger on something, there are some people whose interest it is to have shocking developments, you see a weak government, you take it over, you provide services to it, such as these now highly vulnerable, highly dependent people in New Orleans. She offers an important reality check. It’d be good to have her brought into this discussion because she brings a new perspective to what we perceive as disaster. I effectively dodged your whole question didn’t I?! But I talked learnedly! (laughs).

Interesting interview. David seems to have stuck to his guns through all these long, trial filled years. Heard him speak years ago at a conference in Maryland about the Oberlin college first project. He responded to a question by stating that the mechanical engineers were the ones who they had to drag along kicking and screaming and that the building was underperforming by 30%. Sadly, we find that most mechanical engineers and contractors are still being pulled and pushed along, kicking, screaming and fighting change every step of the way. Building owners are no different, either. Change, any change is frightening to them. They want to keep on doing what they’ve been doing and what their peers are doing. Anything new, they need 10 examples. That is not the path to sustainability. Buildings need to become energy generators rather than energy producers and this is very possible with today’s technologies.

the risks of fundamentalism and closed-mindedness are always alive wherever people become isolated from others and convinced of the rightness of their way of doing things, and the wrongness of any other way.

So we have to learn to appreciate diversity (moral diversity too) and make that appreciation a norm and actively engage in the growth, as David says, of tolerance.

The book he mentions near the end is The Promise of the Coming Dark Age, by L.S. Stavrianos… and it is well worth reading now 40 years after it was first written. And more recently, and with the same theme, is Jane Jacobs Dark Age Ahead.