Bring Me The Woodburning Stove of Alfredo Garcia…. 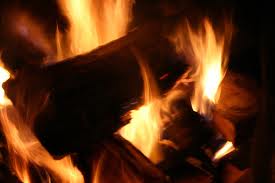 As someone who was just weeks away from installing a woodstove into my house, I was fascinated, as well as somewhat horrified, to read an excellent paper by Nick Grant and Alan Clarke called ‘Biomass – a burning issue’, published by the Association of Environment Conscious Builders (AECB).  Their arguments are convincing.  They open with a quote from David Olivier, who writes that “biomass boilers are an expensive way to make climate change worse and reverse over a century of public health improvements”.  Strong words.  The writers, both of whom heat their homes using wood, set out to investigate whether Olivier was right, rather, I sense, hoping he wasn’t.  “It would have been much easier not to write this”, they state, but on balance, I am deeply grateful that they did, as it is a fascinating and very important piece of work.

They argue that given the upsurge of interest in biomass, what one might call “The Dash for Logs”, the use of biomass boilers increasing 25% in 2 years, and Government promoting it as zero carbon fuel, it is time to stop and take check of what this would actually look like were it scaled up significantly.  They highlight two main concerns.

The first is “is biomass really low carbon?”  The argument usually goes that burning wood is carbon neutral because trees absorb the carbon emitted by burning wood.  This, however, they argue is a flawed way of looking at it.  The time when we need to cut emissions is now (well 30 years ago actually), not in 20 years when a tree is locking up carbon.  As one of the few natural ways we have of taking carbon out of the atmosphere, to burn wood, they argue, is the worst thing to do with it.  It is much more sensible to store that carbon indefinitely by using the wood for building, in furniture etc.  Burning wood actually produces carbon emissions similar to those of burning coal, twice those of burning natural gas, as well as all the attendent problems of particulate emissions.

They argue that a better approach would be to use the natural gas far more efficiently, and see wood as a way of absorbing emissions from burning that gas, rather than burning the wood itself.  Also, wood that is still growing still absorbs more CO2 than newly planted or newly felled forests, which actually emit more carbon than they sequester. At a time, they argue, when what should be being promoted is the growing of timber to lock up carbon, and then the long term storage of that carbon in buildings, the incentives through policy and various grants are to burn it. 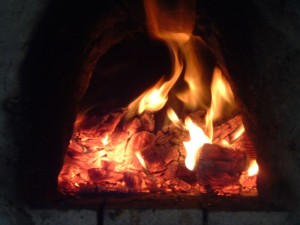 Their second concern centres around lack of available supply, in effect asking the question “Can Britain Heat Itself?” from its indigenous resource.  they cite estimates of sustainable biomass energy potential as being around 10% of total energy use, and the available resouce globally is contracting rather than expanding.  Even sequestering the emissions caused by burning gas through the planting of new trees is not, they argue up to the job, trying to do so to sequester emissions from wood burning is simply not going to work… they write “our point is the biomass is a lot worse than we thought, not that gas is a lot better”.

This leads on to a discussion of energy security, something of great interest to Transition Culture readers.  Would a big rise in the use of biomass, the installation of many hundreds of thousands of woodstoves lead to the UK being more energy secure?  They argue not, that actually timber as a fuel is a more limited resource, and that ‘peak wood’ would arrive sooner than peak gas.  Indeed the last historic occurence of ‘peak wood’ was only overcome “with the grudging acceptance of coal as a replacement for biomass”.  Those who already heat their homes with wood are seeing steep rises in the prices of wood, some providers importing timber from overseas in order to meet demand.  “Suddenly”, they write, “Russian gas feels like the secure option!”

So where does their paper leave us?  They conclude that “the only sure source of energy in an uncertain future is what Amory Lovins called Negawatts – that is “energy conserved or not required thanks to radical energy efficiency measures”.  In my own home, this paper has prompted a rethink.  Rather than installing a woodstove, would that money be better spent on maximising energy efficiency throughout the building?  What else could we do?  I am getting quotes for a range of things and will lay my dilemmas out in front of you all soon for your thoughts…. but there is, as they say, no such thing as a free lunch.

For me, some of this comes back to the debates about community-focused responses and self-focused ones.  If everyone installs woodburning stoves, might we end up back in the age of smogs?  Already on my street 3 homes have them, and you can tell when they are lit.  Are we better to explore group solutions, anaerobic digestion for example, which might still be able to supply us with gas (albeit to far more efficient homes than at present) or other large scale renewables, rather than all fracturing down into small off-the-grid bubbles?

There is no way of keeping warm, illuminated and entertained that doesn’t involve emitting carbon in some way, and the real savings and reductions only come from learning to live well with less.  Certainly looking back at where we have reduced energy use over the last few years, it has mostly come from mindfulness, turning things off, turning things down and from improved insulation.  First thing I did after reading this was to track down a windows engineer who came and overhauled my 15 year-old PVC double glazed doors which have, over time, twisted and shifted so that in winter cold winds rattle through them.  Now they are beautifully tight and sealed and will make a big difference over the winter.  Not straightforward is it, any of this?

I do wish people would stop taliking about carbon emissions. Its carbon dioxide thats the concern, not soot or diamonds. Get your science right before you let forth.

“Its carbon dioxide thats the concern, not soot or diamonds.”

I agree that when people mean carbon dioxide they should say carbon dioxide – but in this case we are actually concerned with ‘soot’ as well – or emissions of black carbon particles. This is both because of the health risk from them – but also due to their warming effect.

However, it is also having an effect in terms of increased melting of ice in the Himalayas due to settling on snow and ice and increasing the rate at which it melts http://www.nasa.gov/topics/earth/features/carbon-pole.html A great deal of this comes from wwood stoves in the Indian subcontinent.

So soot (i.e. black carbon) IS actually a concern – and people therefore need to be even more careful in talking about carbon dioxide when that is what they mean!

On using biomass other than wood, the argument I have heard is that that material would otherwise go toward building soil fertility. Making ethanol of it effectively rapes the soil. Here in Nova Scotia the argument around biomass plants (being hastily put in place to satisfy quotas for renewable electricity) is that burning wood for electricity is simply not that efficient.

It is very frustrating that in Canada our homes are largely built in the stupidest fashion possible with regards to passive solar heating and insulation. What is needed is to completely rebuild our neighbourhoods in order to orient them toward the sun. When that is done we can start to think of sourcing the small amount of wood to get us through those -35C nights.

An ethanol plant must extract the sugars from the biomass. But what about the rest of it?

I know when they chop and hack up the sugar beet to cook out all the juices – what is left, the beet pulp shreds, makes a good livestock forage-type fodder. I add soybean, corn, or canola oil for my equines.

While the ethanol plant might buy corn – at least the stalks and cobs are left in the field, and either turned under to partially replenish the soil, or used for livestock grazing before being incorporated.

I wonder that no one is using green corn – silage – for making ethanol. Silage ferments anyway, I would think the added mass would make that more attractive. Ah, well. Just as feeding livestock transforms the feed into a condensed form, simpler to transport with more value per pound, using just the corn kernels is likely handier to build a plant around. Especially when the object is to burn tax dollars, and not to conserve energy or carbon. Or food.

[…] about the birth of the Transition Movement, reports that he had only been weeks away from installing a wood burning stove on his home in Totnes, in the South West of England when he read a study published by the […]

This discussion seems to have virtually ignored the topic of emissions – here from the Canadian Lung association, are the facts about what’s in woodsmoke:
• PM10 (inhalable particulate matter less than 10 microns in diameter) – PM10, which consists of a mixture of microscopic particles of varied size and composition, has been declared a toxic substance under the Environmental Protection Act. These particles can be inhaled deep into the lungs, leading to serious respiratory problems, including excess mortality, especially among those with pre-existing cardiopulmonary illness.
• Carbon Monoxide (CO) – can reduce the blood’s ability to supply necessary oxygen to the body’s tissues, which can cause stress to the heart. When inhaled at higher levels, CO may cause fatigue, headaches, dizziness, nausea, confusion and disorientation and, at very high levels, lead to unconsciousness and death. Fire Prevention Canada advises that CO detectors be installed in every home that has a combustion appliance or an attached garage.
• Oxides of Nitrogen (NOx) – can lower the resistance to lung infections. In particular, nitrogen dioxide can cause shortness of breath and irritate the upper airways, especially in people with lung diseases such as emphysema and asthma.
• Hydrocarbons (HC) – can damage the lungs.
• Volatile organic compounds (VOCs) – can cause respiratory irritation and illness. Some VOCs emitted by wood-burning appliances, such as benzene, are known to be carcinogenic.
• Formaldehyde – can cause coughing, headaches and eye irritation and act as a trigger for people with asthma.
• Polycyclic aromatic hydrocarbons (PAHs) – Prolonged exposure to PAHs is believed to pose a cancer risk.
• Dioxins and furans- Some dioxins and furans are carcinogenic.
• Acrolein – can cause eye and respiratory tract irritation.

In a couple of years anyone who has installed one of these things is going to look like an anti-social idiot.

So……I was wrong to throw out the oil fired boiler (no gas here) and replace with wood pellet?My wood pellet boiler is incredibly efficient in every sense, works in tandem with a solar panel and requires just one bulk delivery a year (it was two for oil)

Jerry – I would say not in the slightest.

Biomass combustion isn’t all bad – the official line is “The right Technology in the right place” and one of the big issues is what is the alternative, or what is it that you are replacing.

A new wood pellet boiler in a place that is off the gas grid, and replacing oil is probably fine (especially with the reduction in deliveries.
Tim.