« That 10:10 film… not in my name….
Ingredients of Transition: Street-by-Street Behaviour Change »

It’s October already, so it’s time to share September’s Transition activities from across the world…  we have lots of news from Transition groups in the Netherlands. Their Renewable Energy Project has 75 households involved in it, which between them will have about 800 solar panels on their roofs in the coming spring. Also their first Local and Interest Free money project was launched at the end of September, and they also recently held a Post-fossil Festival, with lots of interesting activities going on. Their ‘Share your stuff – with people you trust’ social website, launched in August, has seen 688 people share 832 goods…wow! They’ve also been making ‘eatable façade gardens’ in the heart of the old city of Deventer, and there’s a great video too:

The big neighbourhood garden in Rotterdam is also now open, with a video about that too:

…and Transition Town Houten have been doing interesting things with apples: 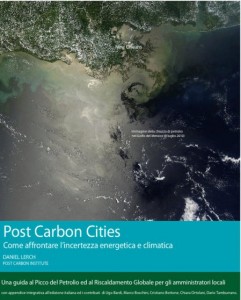 The Italian Transition Translations network have done excellent work and translated Daniel Lerch’s Post Carbon Cities to make it accessible in Italy (see right). The Transition groups plan to give a copy to each Mayor in Italy to raise their awareness about how they can address the challenges of Peak Oil and Climate Change. And we have news from Sweden about how Transition is growing there. Already they’ve undertaken about 30 of the 50 planned seminars, and interest in the 2-day training course is growing. In one region, where the training is about to take place, the local paper offers a free page every month to Transition, all communities in that region have had presentations with their politicians, and their ‘Week for the Future’ involved 150 events…so things are really taking off there too. Other regions are also gathering momentum in a similar way.

This month we have news from Japan too! You’ll see news of new Japanese Transition Towns and all their names, a lovely logo and a list of their achievements so far… and here’s their website too.  Over in Canada, Transition Barrie just held its Great Unleashing, with a family Harvest Festival and loads of wonderful activities and here’s an article in the local paper about it. The Alberni Valley Transition Town Society is hoping to showcase the local farming community and the fruits of its labour with their ‘Promote Our Local Agriculture for 65 Years’ theme for this year’s Alberni District Fall Fair, taking it back to the festival’s roots in the past.

In the USA, Transition Town Minneapolis/St Paul is hosting the Twin Cities Transition Towns and Neighbourhood Sustainability Networking Fair in November, so if you’re around that way, then go along and join in the fun…there’ll be loads going on. TT Honesdale, a relatively new TT (welcome!) is holding a ‘Creating Community’ Potluck Dinner, while a small group of subsistence farmers at Tallassee are calling for their town to become a Transition Town, so if you’re around there, get in there quick! Transition Centre County in Pennsylvania has lots of news for us about what they’ve been up to. The fledgling group TT York Region have been in their local paper, with news of past and up-coming activities, as well as a great pic and some discussions from the group’s founder. T Houston has been busy, including a no-impact project, permablitzs, a solar tour and more. Transition Los Angeles are making rainwater harvesting systems for their community garden and digging infiltration pits, and they’re asking for your help if you’re around that way. Transition Los Angeles hosted a one day mini conference to discuss life after oil in LA, and there’s a report with some pics available here.  The recent Transition Cascadia Regional Summit was already discussed here at Transition Culture, but here is a short film about it too:

Some good news from New Zealand where Transition Nelson has secured a yes vote from the Council to support their Transition activities…fantastic news! Transition Grey Lynn held a Spring Fling, and there’s a lovely picture of one beautiful young lady with flowers in her bonnet and posing for the camera. Fantastic news from Auckland where the Ooooby website just went live to help enable distribution of local food to local people, and there’s a wonderful video to watch that shows a little about Ooooby’s history: 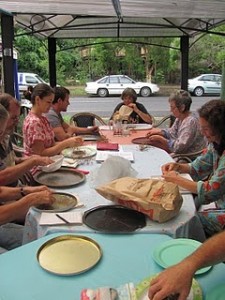 In Australia, Transition Town Eudlo is busy checking the viability of seeds in their seed bank and the project’s organisers are asking people who have planted these seeds to let them know how they’re growing so they can update their records (see left). Transition Town Maitland has given us an update of their activities, with some permablitzs and movie nights and lots more.  West Hobart Environment Network (WHEN) held a Solar Hot Water Forum, and you can read about that and some of the great offers available here. And there’s a new Transition group in Perth, so congratulations to them, and if you live in Perth, then why not join in the fun!Here’s Andrew Lucas giving a Transition talk for the Melbourne groups, which felt the need for something more local…

Transition Town Kenmore and District is just launching its Growing Food and Landshare Initiative which will match people without land but who want to grow food with those who have land to spare. Here’s some news about an upcoming Sustainable Living Skills Festival you might like to get along to at Devonport, if you’re around that way… Transition Town Whangarei had some really useful job ideas emerge from their community job summit. Transition Darebin is organising a series of events to encourage people to grow their own food or purchase local produce, and top of the list is a tour through key local food production, preparation and retail sites.

In the UK, Transition Heathrow have taken over former Berkley Nurseries site, also the site of the defeated third runway, and developed a thriving community garden and social space, called ‘Grow Heathrow’, with loads of activities, and a really neat video. They’ve been rightly celebrating the adjournment of the court case that is seeking to evict their squatter community project. As the evenings close in and winter approaches, TT groups are turning to film screenings. 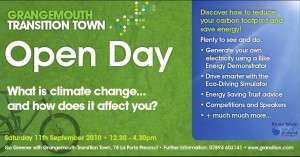 The everso-new Transition Town Wanstead (welcome!) will kick off their activities with a film night, so go and join the fun if you live around that way. TT Cheltenham’s winter line-up is here and TT Totnes’s is here.  TT Horncastle is hosting a skills share day very soon, with loads of really useful skills being demonstrated, while TT Grangemouth will be doing some awareness raising and having lots of fun (bike energy demonstrator…Eco-driving simulator…see right) at their first ever open day. Here’s a great piece in ‘Scotland on Sunday’ about lots of the Transition Towns in Scotland and what they’re up to. TT Bromsgrove has a lot of activities coming up, so try to get along if you’re around that way.

In Transition Worthing, they have been having a reskilling session in a garage, teaching people to sharpen their knives (Part 3 seems to have mysteriously disappeared)….

TT Taunton is busy with their Transition Together project, and I just love these little clay peeps…which were for a procession of clay peeps…ahhhh! They’ve also held apple gathering days where they’ve harvested local apple trees and shared the produce amongst the helpers and may also distribute to local charities. And have a look at their FANTASTIC wild food, free food map! And if you’re around, why not go along to the Abundant Taunton event, with more foraging and some skills demonstrations (see left).  And there’s another fab map from Southend in Transition…and an interview and the story behind Southend’s community fruit-mapping activities. Oh no, your secret stashes of wild whortleberries and plums won’t be so secret anymore! From TT Forres, Kim explains in a very short Youtube clip about how the TT Forres Environmental Placement Programme was delivered, which is a Green Business Partnership initiative sponsored by the Scottish Government, FSB and Teradata.

TT Brixton has been in the news recently, with an article one year on from the launch of the Brixton £, and another one asking ‘will stick around’? Transition Bristol has been everso busy with their Green Door’s Project and a wonderful just-launched website with a 2-month programme of activities across Bristol, and here’s an update two-weeks on from the launch…and T Bristol has been in the newspapers here. TT Montpelier, Bristol, held a Bean Feast and, although it’s over now, there’s some great info about the history of the event and some ideas for you to try yourselves… Here’s a report of TT Forest Fields and Area open space event and talk by Rob while he was up that way to present at the Development Trust’s Association conference. Transition Maidenhead is happy to have been selected as a pilot project area for the ‘Bringing Diversity Pilot Project’, and they outline the activities and training they’re undertaking. TT Totnes Transition Streets project has featured in the local BBC news, and they’ve also got this wonderful youtube film:

They’ve also been in the media with their ideas for a wind-powered ferry between the UK and France.  Also in Totnes, we were so happy to welcome our Steph back home after her 2000 mile walk around the UK in flip-flops. Transition Town Horncastle has begun its heating makeover of the town’s community buildings, thanks to the £140,000 award they won from the British Gas Green Streets programme.

Lush has made a little video during their Lush Managers conference where they invited Anna from Transition Cambridge (which had already received a grant of £1900, well done!) to demonstrate running a charity party in a Lush store. They had a lot of fun and many people showed lots of interest in Transition and asked if there were groups in their own cities they could support:

Transition Cambridge also has news of their 2010 story-telling competition. Join Transition Town Kensal to Kilburn at their Harvest Festival and ceileigh for some swishing, music, workshops, dancing and a chance to be flamboyant.  Transition Norwich will be mapping sustainable food patterns in local communities with their One Planet Community Kitchen, and are also organising workshops and other activities as part of the preparations for their Low Carbon Cookbook and guide.  TT Shrewsbury invites you to their World Food Day event, with lots of activities and a pie competition, while TT Exmouth recently held a Potluck feast, and the food looks delicious! Portobello TT group PEDAL is helping local people get more fruit trees with their Fruitful Porty project, and they’re also looking at the feasibility of starting a community farm, which they need people to help out with so why not get involved if you’re around that way. 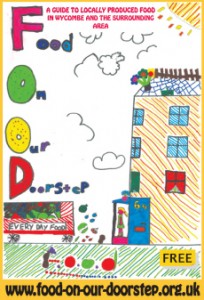 TT Sturminster Newton have got permission to care for some land and create a community Transition garden which they’re now in the process of designing. And congratulations to Transition Norwich and East Anglia Food Link for securing £137,000 of funding for various local food projects, including a Community Supported Agriculture scheme…fantastic! Transition Town High Wycombe is about to launch its local food guide (see right), and there’s a lovely website for it too, illustrated with children’s colourful pictures… Slaithewaite Transition Towns (MASTT) helped the Green Valley Grocery and the Handmade Bakery to organise the Colne Valley Food Festival, with loads of activities and a bit of food swapping.

Our thanks, as ever, to Helen for compiling this exhaustive (and exhausting!) list of what’s what out there…  if you would like anything your initiative is doing to be included, do let us know…. and don’t forget to enter any projects you have going in the Projects Directory…