« The power of “why not?”: an interview on Marlow FM
A second Sneak Peek from ‘In Transition 2.0’: Transition Monteveglio, Italy. » 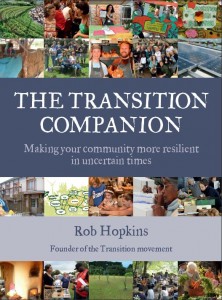 The film – and I should declare that this film-maker is also my wife – is a proud, emotive showcase of the massive expansion of the movement in the last four years, highlighting some of the most inspiring Transition initiatives from around the world. The book is a comprehensive, companion how-to guide; a step-by-step toolkit for creating a Transition initiative in your home city, town or village.

In Transition 2.0 takes the viewer through an emotional, inspiring journey charting the critical-mass explosion of Transition initiatives worldwide. Transition is now a movement that politicians and other world leaders are sitting up and paying close attention to.

This accomplished film left me in no doubt that the Transition Network and its many seedling ‘on the ground’ Transition initiatives are a vital contribution and potential solution to the world’s current financial, political and climate crises. This is a high-end documentary created in the spirit of the movement as a collective enterprise working with local film-makers across the planet. Emma Goude said of its making: “It was important to connect to professional film-makers worldwide to reduce the editing time and production cost, to present consistently high production values and to reduce the carbon footprint of the project.” Financing the making of the film and ensuring the global film-makers got paid was made possible using an internet-based system known as crowd funding.

In Transition 2.0 has a deep, emotional core running throughout. On several occasions I was moved to tears by the individual and collective changes taking place and the hope emerging from a host of extremely challenging situations planetwide.

The Transition Companion at first glance looks much like any other well-produced academic text. But don’t be fooled into believing this is another one for gathering dust on the shelf, or a coffee-table filler to make you look hip. This is infectious, rallying-cry reading, offering nothing less than a new worldview where Earth citizens can live in abundant communities, potentially at peace and far more connected and content than we currently are or have been.

The book is well designed and easy on the eye. Each section is colour-coded, breaking it down into the organisation’s component parts, ranging from creating your own Transition initiative, right through to the formation of an Energy Descent Action Plan and setting up new social enterprises. The positive force that exudes from this impressive ‘how to survive and thrive’ guide is utterly tangible and ultimately very uplifting.

If you need inspiration in these tough times, if you want to know where to begin in the shift to living abundantly in a post-peak-oil world and how to weather the storms of planetary change, start by watching this beautiful film, then go out and buy this inspiring book.