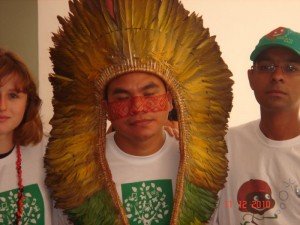 This month we’re starting off with Brazil and some very exciting news for the New Year, because, as reported here at Transition Culture yesterday, the first ever Transition favela initiative has just held it’s Unleashing!… Wonderful news indeed! Here are some great pics of the event. The community has been very busy indeed. 85 community members have participated in Transition Training and they’ve implemented all sorts of wonderful activities. Community gardens are being created in seven abandoned spaces, and a ‘Become our own Media’ team has been created which has registered all their events and has just completed a film aimed at reviving the region’s oral tradition, which was screened at the Unleashing.

They’ve held visioning and back-casting exercises, and have seven working groups including Social Enterprises and Local Business, which has a new Community Owned Bakery; Market for Sustainable Health, which is promoting the wellbeing of slum dwellers; and Water & Preservation group. They are care-takers/neighbors of the largest urban forest in the world and one of their first actions is to clean the waterfalls and rivers. They have planted 228 native trees and their intention is to re-forest of 7.7 hectares of the Cantareira Park over the next 2 years. Big targets which we know they’ll achieve! We look forward to seeing and hearing more from Transition Brasilandia…

In Chile, Transition Town El Manzano is building a community centre and a campus to help with the ‘great re-skilling’ and they’ll also implement their ‘permaculture master plan’ and enjoy a summer of ‘bioconstruction’…it all sounds very exciting!

In the UK, first is a reminder about your initiative’s fabulous free DVD of Chris Martenson’s Crash Course. It’s just £2 to cover the costs of P&P, and it’ll be a really useful tool for your initiative’s work, so if you haven’t got your DVD yet then don’t delay or they’ll run out … .  You can also watch Part One of it here….

Just before Christmas, Transition Town Finsbury held a fantastic event at the South Bank Centre, London, with Polly Higgins, Michael Meacher and Rob Hopkins. It was a huge success and has ignited much discussion and grown some great ideas…you can read a report of the evening at here.

Transition Malvern Hills are doing great stuff with their project to conserve the town’s historic gas lamps and to make them 84% more energy efficient, through their ‘Lighting Group’, more popularly known as the ‘Gasketeers’.  Here is a clip from their appearance on BBC News…

… and a bit on the BBC website giving more details about their work, and also more information on their own website.

Last month we included details of Transition Town Lewes’s fundraising event at the Glyndebourne Opera House (see pic left), and now here’s a bit more information about it. Transition Town Brockley have a great update of their London Orchard Project, a community orchard that they’re growing together with Friends of Hilly Fields and the London Orchard Project. And Northaw Area Transition Initiative has received some funding from Welwyn and Hatfield Borough Council for their community beehives project…congratulations!  Here is a short film (in German) from Arte TV which visited Brixton and Totnes among other places… and which enables you to virtually go shopping with Sophy Banks…

I like this…Transition Town Portobello, or PEDAL, recently held a winter warming wassailing solstice celebration in the Donkeyfield Community Orchard….hope they weren’t too snowed under. PEDAL also held a Local Food links event to look at how they might get more food grown and sold locally, and here’s a report with a lovely map and a food projects diagram too…

Here is a short film about Transition West Bridgford doing something Christmassy which has, for some reason, been subtitled in Spanish… no idea of the story of this film sorry, but it’s rather good fun… and features lots of Bridgford buskers….

In November, Transition Omagh in Northern Ireland held their ‘Sow the Seed’ cabaret evening… here is a short film of Catherine Brogan introducing the evening…

Congratulations to two new Transition Initiatives, one is a Transition Island at Transition Jersey, and the other is another London TT at Crystal Palace, so we welcome you both. And more good news because the Eco Explorers group at All Saints’ Church in Ascot is now discussing how Ascot can become a Transition Town… and Transition Town Sturminster Newton is now an official TT…congratulations! Some lovely news here about Transition Town Whitstable’s food group, which is one year old, and of their public raised beds growing project, and ideas for a new community food garden, so take a look! And Transition Town Wimbourne has been busily organsing Morsbags to give away from their Christmas float.

Here’s a nice story on Totnes library’s Transition shelves, and news that Totnes Town Council has recently voted to become a Transition Council and work with Transition Town Totnes to make the town ever more energy efficient. Transition Edinburgh University has a little write up about the Transition Scotland’s Diverse Routes to Belonging conference, with useful comments from attendees on the conference and on the University’s own workshop. Here’s a little report of an evening discussion of the Big Society hosted by Transition Shipston and Voluntary Action Stratford on Avon. Congratulations to Transition Town Pershore for winning £150 from the Cooperative Group which it will use to further their awareness raising activities.

Transition Town Wivenhoe will be offering domestic energy assessments and install energy monitors in homes to check how much energy is being used, and advise people on how they can reduce energy use as well as their bills. Sounds great…why not get them round to help you save energy… and money too? Transition Town West Kirby has shared a summary of the wonderful projects the food group has been undertaking throughout 2010 including their community orchard, foraging, fungus foray and breadmaking, and followed by some of the activities planned for early next year.

In Europe, we have some wonderful news from Portugal… They recently held their first training course with 32 students from around the country, followed by a workshop facilitated by Miguel Leal (Paredes em Transição) and Jacqi Hodgson (TT Totnes) as part of the GLOCAL 2010 International Conference. Miguel talked about what they’ve been doing with Paredes em Transiçã and the number of hits on their blog went through the roof! The initiative has also had two Transition Tales published in a major local newspaper: one telling of the first farmers’ market (2011) and the other of the 3rd anniversary of Paredes’s constellation of community allotments (2014). So there are lots of wonderful things happening in Portugal!

Transition Denmark has also been very busy. They now have 179 members on their website, with 12 local Transition Initiatives. Plans are being made in Frederiksberg for Transition groups to develop a community project on local lands…very exciting. They’ve also held community cafes with Transition talks in “the ecological inspiration house”, and a national meeting for Transitioners from all over the country. There’s now a more official core group called “En forening” with representatives from beyond Copenhagen, and they’ve held a 2-day Transition Training as part of a permaculture seminar in Friland. So they’re off to a fantastic start! And from Italy, we have a great piece from RaiTV about life beyond economic growth which features interviews with some Transition Network folks. 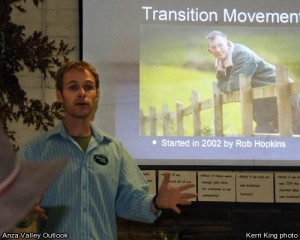 Over in North America, Transition Sandpoint has been in the news and you can catch up with their story in text and hear it on the radio, and there’s another interview to listen to here with Raven Gray, founder of Transition US. Transition Laguna Beach gave a presentation for the Mountain Communities of Resilience (M-COR), and there’s a nice report and some pictures here.  The picture to the right shows Max Isles of Transition Laguna Beach terrifying the local populus with a picture of Rob Hopkins leaning on a fence.

There’s also a radio program you can listen to discussing Transition Towns with Bill Sharp, co-ordinator of Transition Centre in Centre County, and have a look at Transition Victoria’s fantastic pics of their TT picnic, with lots of re-skilling action.  Transition Town Media are holding a potluck with local food and music, so if you’re around that way then try to get along for the fun, and they’re also holding a contest for artwork celebrating healthy food, deadline January 15th. Why not have a go? Transition Town Montpelier, Vermont, have shared the activities of their working groups, including the Village-building Convergence, APPLE Corps and Permaculture groups, so have a look and see what they’re up to.  Transition US has a new Transition initiative – Transition Newton – so we welcome them as the 77th initiative in the US. And here’s a nice story about one of the Transition Town Putney members…

Also, things are stirring in Pittsburgh, and here is a short film from our old friend Kevin May, (better known to Transition Culture readers as Phil Osophical, the Spongebob guy…) offering an introduction to Transition Pittsburgh…

… and here Kevin introduces one of their big new projects….

Transition Town Prince Edward County, Ontario, have shared lots of great pics for you to see here, and lots of interesting events going on too.

Finally, Transition Towns in Australia were at the Woodford Folk festival to discuss with people what’s worked with TTs and what hasn’t so far…so a bit of a lesson sharing experience, and a couple of pics, while Transition Blue Mountain recently held a seed sharing event. And in New Zealand, Transition Town Oamaru is holding a sustainable skills summer school teaching skills such as raised bed gardening, cheese making, bicycle maintenance, hand spinning, bread making, seed saving and so much more…it sounds fantastic!

Happy New Transition Year and see you next month!

Is ‘tax haven’ status inimical to transtion? Are there any official transition initiaitves in tax-havens?

Transixion Brasilândia as ‘the first ever Transition favela initiative’ where ’85 community members have participated in Transition Training’ is a genuinely stand-out case.

How many similar sized communities in the UK have such a large proportion of residents who have been able to take the time to do Transition Training?

And Transition Sunshine Coast in Queensland Australia was part of the group that put forward local government’s Energy Transition Action Plan – which includes our EDAP. http://www.sunshinecoast.qld.gov.au/sitePage.cfm?code=energy-trans-plan

[…] I spoke of? Well, take a look at what Transition initiatives around the world are getting up to here Take not of the first item on that which is about the first Transition Favela (township) in […]