« Competition winner!
An April Round-up of What’s Happening out in the World of Transition »

Ingredients of Transition: Investing in Transition 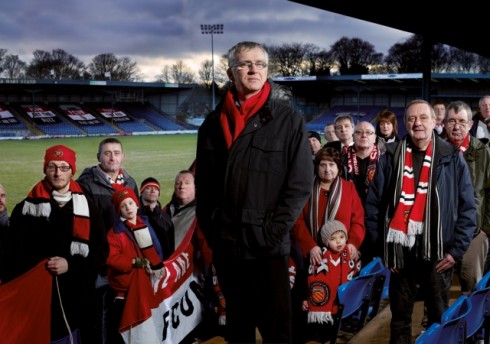 FC United is a supporter-owned football club in Manchester, formed by Manchester United fans opposed to the Glazers buyout of the club. They play in the Northern Premier League and aim to raise £1.5 million for a new ground, and have already raised £700,000, in part through a very well supported share launch. Might a similar model also enable the rapid acceleration of Transition at the community level?

Here is a last minute addition to the ingredients for the forthcoming ‘Transition Companion’.  It is especially timely as OVESCO in Lewes’s share option has managed to raise £286, 600 is only £20,000 short of its target … if you live in an around Lewes, get your shares before 27th May!!

Money isn’t a neutral thing.  The decisions we make with our investment choices either prop up and reinforce an economic model rooted in a past of cheap energy prices and climate irresponsibility, or they can help to bring forth a new, revitalised and more appropriate way of doing things.

“I think the last piece is seeing ourselves as part of the problem.  Our consumption dollars, what drives the system, our investment dollars provide the foundation for the system.  The more that we can create alternative systems by channeling our consumption and investment and convince others these are great ways of living, and consistent with what we’re trying to achieve long term, I think that’s the way we’re going to succeed”.

Making the kind of Transition that this book has argued for in the time that we have remaining will be an enormous, as well as an historic, venture.  As we saw on earlier, successful localisation will require meaningful investment to make it happen.  We have already looked at a range of ways of ‘plugging the leaks’ of our local economy (see Tool 19), but this final ingredient explores how investment on that scale might happen, and a range of possible mechanisms for enabling Transition to scale up sufficiently.

“OVESCO raises a quarter mil for community solar via people-power finance.  If we replicate many times, we can begin to dream”.

For those of us fortunate enough to have investments, we do have some degree of control over choosing to invest in supporting local enterprises that actually work to strengthen the resilience of our local communities by providing renewable energy, food, transport, building materials and other essential goods and services for which there will always be a demand. Many of these opportunities may already exist.  It is early days but there are many enticing opportunities that feel worth exploring, and could ultimately offer a more stable long-term investment than the global financial markets, as well as furthering the aims of Transition:

This book has argued that, in the context of peak oil and the unravelling debt crisis, global economic growth will become increasingly unfeasible.  However, within that, it is perfectly possible that one of the key areas where we will see economic activity and growth will be at that local level.  Designing and enabling models that make inward investment into Transition possible will be a key tool in its successful implementation.

** IMPORTANT! You should take expert advice before making any financial investment and the above is not a recommendation to invest in Transition, just some ideas to mull over.**

The Transition movement needs, as it continues to scale up, to think seriously about models that will enable, with confidence, the levels of finance that active Transition will require to come forward.  Many models for enabling this already exist, and new ones are emerging.

[ii] From an interview on Transition Culture which you can read in full at http://tinyurl.com/3t4e9vg.

[iii] A good overview guide is Hill, C, with assistance from Lynch, M. & Curtis, J. (2007)  Community Share and Bond Issues: The sharpest tool in the box published by the Development Trust Association which can be downloaded from http://tinyurl.com/3bhke9w.  Co-operatives UK’s document Investing in Community Shares offers a detailed guide for the potential investor, and can be found at http://tinyurl.com/44bc83w. A longer list of other useful resources on community shares is at http://www.communityshares.org.uk/resources.

Rob – I like your idea regarding Self Invested but Personal Pensions (“SIPP”), but I fear that many of the providers may block these efforts. Although in theory you can invest into all the assets mentioned, many providers have their own internal policies that will prevent such investments. Perhaps the answer is to find a provider (or establish one) who is ready for these types of investment?

It’s worth noting that there a a huge range of tracker funds which you can include in a SIPP, or invest in generally. These follow share indexes, sectors, commodities – more or less whatever you want. The main thing is the charges are much less than putting your money into an actively managed fund.

I think this is hugely important with great potential for the Transition Network.

There are many of us who do have some money to invest and collectively we could do great things. So-called ‘ethical funds’ are barely beter than conventional investments, and savings accounts pay almost no interest, but really, it is the opportunity to do something really constructive for your community that is exciting.