Let’s take that a bit more slowly.  Here is a shop, one of many that has gone out of business due, among other things, to the growth-fixated policies of the G8, situated in a place G8 ministers will be driven past en route to their summit.  Rather than their being able to see how things are actually unfolding in the real world, the division and misery being caused by their approach to the economy, the windows have been plastered with stickers that present it as a fully-stocked, thriving shop.  As singer/comic Mitch Benn put it on BBC Radio 4’s The Now Show on Friday,  “the last thing you’d want would be for a bunch of people meeting to fix the economy to see how bad the economy’s got”.

The BBC reported the story, giving a bit more information about it:

County Fermanagh’s district council sanctioned the fake retail units as part of a £1m makeover before it hosts the G8 summit. The event takes place on 17 and 18 June at the Lough Erne golf resort near Enniskillen.  The chief executive of Fermanagh District Council has defended the optical illusion.

“It was aimed at undeveloped sites at the entrance to the town and then right throughout the county in terms of the other towns and villages, looking at those vacant properties and really just trying to make them look better and more aesthetically pleasing,” says Brendan Hegarty

Here’s the thing that fascinated me most though.  It’s the kind of shop they chose to portray it as.  They didn’t print up large stickers that would present the shop as being a Tesco Metro, a Sainsbury’s Local, an Aldi perhaps, or even branch of one of the banks that contributed significantly to our getting into this mess in the first place.  They didn’t make one huge sticker, one false façade, that showed a new shopping precinct, glittering with all the usual chain stores that dominate every such precinct.  Or a Travelodge perhaps.  Rather they set out deliberately and in considerable detail to portray the kind of vibrant, local, independent business that has either become extinct, or which survives in spite of, rather than because of, the policies of the G8.  Here’s another one… 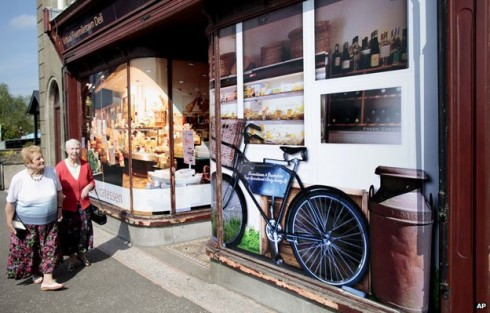 The windows are hung with delicious-looking hams, the display features meats and a whole range of delicious local produce, beautifully arranged.  Although the cut-and-paste nature of the graphic design rather gives the game away (the same arrangements of hams appear two or three times), what they are trying to portray here is that most endangered of species, the local, independent butcher.

In the mid-1990s there were 22,000 butchers in the UK, by 2010 there were just 6,553.  The independent butcher is making something of a spirited fightback though, although certainly not aided, in any sense, by the G8.  The butcher that would have occupied that shop no longer exists, most likely because a supermarket opened nearby and completely shifted the balance of the Belcoo economy (any readers from Belcoo who might like to write in and tell us what led to this shop’s demise would be most welcome).

The other day I spoke to Nick Sherwood of REconomy Herefordshire, who has co-ordinated the Herefordshire Economic Evaluation (the second such piece of work, the Totnes one already being published, and Brixton’s coming soon).  Our conversation will be published here soon, but one of the things that really struck me was the following:

We estimate that the top five major supermarkets in Herefordshire account for between 71% – 83% of all household expenditure on ‘brought home’ food and drink, or up to £180m annually. In addition, around £30m per year is spent in the smaller ‘chain’ supermarkets. 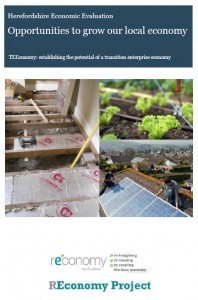 Their conclusion is that the true ‘local spend’ figure, i.e through local, independent businesses in Herefordshire, could be around 16% of the total.  In terms of a national version of that figure, the best I can find is the figure from the Portas Review that states that 8,000 supermarkets now account for over 97% of all UK grocery sales.  Although clearly other smaller supermarkets account for some of the remaining sales, let’s assume, for argument’s sake, that nationally, 3% of what we spend on groceries goes out through local and independent businesses.

I would imagine that everyone seeks an economy that is able to provide jobs, economic activity, stronger and happier communities and community resilience, while also skilfully reducing its carbon emissions on the scale required.  The question of our times though, as far as I’m concerned, is whether that is best achieved by expanding the 97% of our economy currently dominated by huge supermarkets, the kinds of enterprise that the UK government and the G8 see as leading the push for growth, or protecting and enhancing the 3%?

It’s a vital question, because at the moment the push to eradicate the 3% altogether, or at least squeeze it a lot harder, continues apace.  Yet that 3% is better suited to meeting those core needs of ours.  As the recent report by Localise West Midlands on ‘community economic development’ states:

A study focusing on New Orleans compared 179,000 square feet of retail space that is home to 100 independent businesses to the same-sized space that is home to a single supermarket. The former generated $105 million in sales with $34 million staying in the local economy, while the latter generated $50 million in sales with just $8 million staying locally, and necessitated 300,000 square feet of parking space (see graphic below). 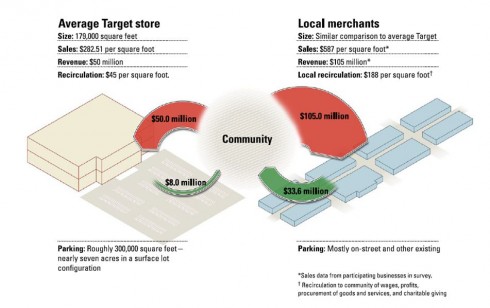 Santander’s ‘Market of Hope’ which I wrote about here last year is a great example of how a city can be fed by looking at large retail spaces in such a way that they boost and support the local independent economy rather than undermine it. When Sir Terry Leahy, CEO of Tesco, was asked whether there was any alternative to supermarkets, replied:

“… queueing at one store than trudging down Watford High Street in the rain to another shop … is this what people actually want to go back to?”

But no, it’s not about “going back”, rather about going forward in a way that meets our needs rather than those of the City of London.  What we now know is that even G8 ministers would rather pass through High Streets populated with small, independent butchers, bakers, grocers, would rather see shop windows overflowing with delicious food,  trusting that the relationship they have built up with the shopkeeper over many years will mean that he/she stocks the best produce they can find.  It feels right.  It’s human scale.  It makes sense.  It’s an economy that is ours, it belongs to local people, to the local economy.  Even G8 ministers would now appear to prefer a shopping experience that actually involves interacting with other human beings rather than wandering anonymously around a superstore and then cashing yourself out at the end.

The core argument of The Power of Just Doing Stuff, published on Friday, is that if we really want to achieve our goals of jobs, economic activity, stronger and happier communities and community resilience, while also skilfully reducing our carbon emissions on the scale required, we’d be better off focusing on growing the 3% rather than the 97%.  It’s a pretty simple idea, and, to me at least, a blindingly obvious one, but that doesn’t mean it’s easy.

However, the experience is that this fightback has already begun.  The explosion of new bakeries, pop-up shops, community renewable energy projects, craft breweries, independent record shops, complementary currencies and communities acquiring their own assets is already happening around us, but it needs us to get behind it, to put our shoulders, our spending power, our sheer bloody will, to making it 10%, 30% 70%.  If we want a stable climate, reduced energy vulnerability, economic stability, and a healthy human culture, we really have no choice.  As Maria van der Hoeven of the IEA said recently at the launch of a World Energy Outlook Special Report, Redrawing the Energy-Climate Map, “the path we are currently on is more likely to result in a temperature increase of between 3.6 °C and 5.3 °C”.

Fortunately, it’s a push that is life-enhancing, thrill-generating and in which we discover a resourcefulness, a kindness and a passion in ourselves that we may have forgotten was there.  I’ll leave you with a quote from the book, from Helen Cunningham of DE4 Food, a social enterprise food hub in Derbyshire that grew out of Transition Matlock.  The project grew from helping a local farmer with lambing and has grown into an innovative new business:

“Never in my life did I imagine that I’d be able to bring lambs into the world! It wasn’t a skill I ever expected to have. It was such a different thing from what we were doing in the rest of our lives, and I think from then we’ve all thought “OK, we can learn these new skills, we can learn how to lamb, we can learn how to grow vegetables and learn how to do Excel Profit and Loss sheets and whatever.” I think we all just really wanted to change the way we live, and change our own personal lives and to change things and live different lives ourselves as well as a different life in our community”.

You can pre-order your copy of The Power of Just Doing Stuff here.

This is a brilliant post Rob and one that needs to be said and understood on a deep level. We are building Potemkin (sp?) villages in our own cities. Please could you ease up on the book promotion though? I promise to buy it if you do.