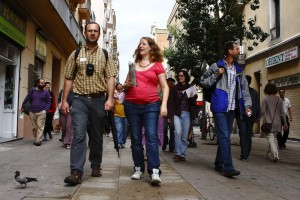 Members of Transition Town Barcelona head off on their 'Caminata'

In Europe, exciting news from Ferney-Voltaire, which has decided to become a Transition Town and they’ve just started their awareness raising activities, so welcome to them. SQYenTransition in France have this great project with the lovely name of verger dans ma ville…an orchard in my city. And for an idea worth sharing, have a look at Transition Town Barcelona’s La Caminata, or Transition Walkabout…a nice idea that helps you get to know your town and community more, and helps them to get to know about you too. In Germany, Gerd Wessling made a presentation about Transition to 150 people from 34 countries at the Conference of the Emerging Commons, and updates are being added here. And then there’s been a wonderful Transition Conference in Germany, with participants from Germany, Austria, Switzerland and France. Have a look at the Konferenz Blog to see what went on, and here are a couple of film clips from the conference.

.. and here is a short clip from Transition Town Deventer in the Netherlands. 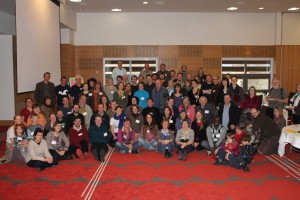 We thought you might also like to know that subtitled versions of our film ‘In Transition 1.0’ are now available on Vimeo. Check the links on Transition Network’s movie webpage here.  As well as the conference in Hannover of course there was also the ‘Diverse Routes to Belonging’ conference in Edinburgh, so in case you missed the state-of-the-art conference blog, you can catch up on the whole event here.  Here is the group photo from that event (see right)…

In Ireland, at the Scariff Community Garden and Transition Town there are plans afoot for a fantastic project to convert a barn into a community kitchen space for local food businesses to use, ad enable local food producers and artisans to have space to develop their produce into goods for the market.

In the UK, Transition Scilly recently organised a local food producers and buyers meeting, which identified various constraints in food production, processing and distribution, as well as many possible solutions and untapped potential. They’ll be producing a report within the next couple of months as well as a Local Food Directory, Food Festival and Local Produce Shop, so keep a watch on their website for updates. They’re also having discussions with local schools about how Transition can be embedded into the educational curriculum, which will be fantastic. They’ll also be organising a Wassail (with a bit of work alongside) at their community orchard.

Transition Town Farnham are planning a community play, while Transition Town Lewes has been busy with their ‘All Star-All Lewes’ line-up, at Glynedbourne Opera House no less (!) as a celebration of Lewes’s rich history and experiences. There’s also news of a nice project between TT Lewes and a local school. Transition Taunton is continuing with its regular Transition Drop-in cafés with presentations and lots of Transition chat, and they’ve also shared their November events, so have a look and maybe you’ll get some new ideas. Transition Town Worcester has announced a new website to link Worcestershire’s Transition Towns together and enable them to easily see what’s going on in neighbouring Transition Initiatives around the county. There are seven initiatives listed on the site already…

Transition Network’s Ben Brangwyn gave a talk recently at Campaign Against Climate Change conference in London, here it is…

We’re hoping for a new Transition Initiative in Redditch where many people met to discuss the possibility of the town becoming a Transition Town. There was much enthusiasm for this and many people have signed up to be part of it.  If you live locally and you want to link up, then they also have a facebook page. And then it looks like we’re seeing the start of Transition Sutton too!

Transition Town West Kirby helped the Hoylake Community Centre to organise their local farmers’ market, and the first one attracted around 2,200 shoppers…fantastic news! Transition Town Dorchester has an update on their community orchard which is on Network Rail land and has just benefited from a generous donation of £1,000, while Transition Town Grangemouth have this wonderful project giving away ‘family trees’, so if you live that way then why not plant one too!

Marsden and Slaithwaite Transition Towns initiative (MASTT) is looking for volunteers to help out with all sorts of activities, so if you live around that way, then why not get involved. There’s great news from Transition Rhayader who obtained £30,000 to do an eco-refurbishment of a local school, and it’s now nearly complete and will be ready for the local community to use again. Transition Town Finsbury has an upcoming debate with Rob Hopkins, Alexis Rowell, Poly Higgins and Michael Meacher MP, so if you’re in London it would be a great event to attend. Rob was also in Derby recently and you can watch and movie and slides of his presentation here:

Transition Edinburgh University is the first Transition University to exist, and so has been the subject of much research. To learn about all this and discuss the research further, they organised a research evening to give the researchers a chance to showcase what they’re doing and enable others to find out more. Transition Town Totnes has been busy persuading the town council to be a Transition Council, which you can read about here and here. And they’ve also been on Radio 4 with Peter Day in a programme that questioned further economic growth as the panacea to the current economic problems we’re facing. Transition Town Totnes and the Transition Network also had a visit from Radio France, and the report is here.

After her 6 month Transition Tales walkabout, Steph has been in high demand to visit and talk about her Transition Town tour, including a trip to Transition Town Greenwich in November to tell more tales. Transition Belsize Energy group recently held an Energy Expo, while Transition Town Maidenhead have a clever idea of forming a solar energy co-op and Sustainable Merton/Transition Town Wimbledon have a ‘Juice From Your Roof’ solar power buyers’ club. Transition Town Stoke Newington organised a gathering for people involved in energy efficiency projects to share ideas and look at ways of supporting one another. Transition Stoke Newington and Hackney Bikes are holding a fundraising event in December to help keep their Hackney Bike Workshops running for free, so do support that if you’re around that way. Transition Town Kingston is preparing a Green Enterprise e-Directory (GED) and is looking for local green businesses and community enterprises to include in it, so if you’re one of those or know of any around that way then send them the details. London Transition groups have been up to loads of other activities too, and you can catch up with some of their fun by looking at their Year in Review. 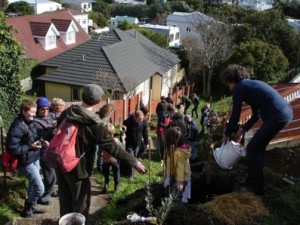 In New Zealand, Transition Initiatives have been invited to join in some sustainable living sessions at a co-operative café, and those who made it along to the first session have been able to help decide which activities the three follow-up sessions will focus on. There’s a lovely story about Transition Town Brooklyn’s struggle and recently successful bid to make a Community Orchard in their town, and a must-see Planting Potion as the end note. Transition Town Oamaru is holding some Sustainable Skills Summer School events in January, so if you’re around that way, try to join the fun…it looks fantastic!

In Australia, Transition Town Kenmore is holding a re-skilling day…with bike repairs and wool spinning amongst the many activities set for the day.

Over in the US, Transition Town Chelsea recently held a conference with lots of activities to enjoy, and you can read about it in the local paper. Transition Snoqualmie Valley undertook a transport survey and also gathered useful ideas on how people thought the public transport could be improved. Transition Cotati has been in their local news, covering an interview with the founder and an overview of what they’ve been up to.  Franklin County has a Transition Town Film Project that’s being sponsored by local Transition Town groups and anyone in the county is invited to take part. It’s a local film project that’s making short films to envision how their local communities can become more sustainable by 2030, with video training workshops planned for early 2011, followed later by a film showing and film contest. It sounds great…so if you’re in Franklin County, why not get involved.

There’s a new initiative at Transition Town Hope…welcome to you! And then Jamaica Plain is currently discussing whether or not they should become a TT…so we hope they decide it’s a yes! Transition Putney has celebrated its one-year anniversary, congratulations! And they give us a helpful roundup of what they’ve been up to over the past year. And here are some useful ideas for anyone Transitioning in a large city… Transition Los Angeles has a city hub and a map to show all the Transition Initiatives across the city. Transition Town Manchester is hosting the Bread and Puppet Theatre, which sounds really wonderful. This year’s show is the Decapitalization Circus and will demonstrate, in “numerous death-defying stunts the phantastic effects of the capitalization of life in the U.S. and citizens’ courageous efforts of decapitalization”.

In Canada, Transition Victoria will soon be holding an Open Space event to discuss how they want their community to look in the future, and how they get there from where they are now. It’s designed to inspire people to start new projects or get involved in existing Transition Victoria ones. Finally, we’ll leave you with this great video review of the last year in the life of Transition Calgary, well done all…

Wishing you all a happy Transition-filled December!

But a smiling visitant here to share the love (:, btw outstanding pattern .