Some reflections on the 2011 Transition Network conference 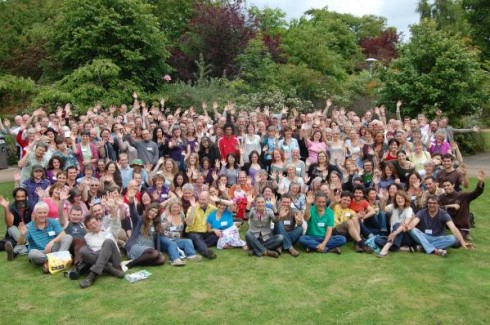 We had a great few days at Hope University in Liverpool.  This will not be an attempt at a complete document of that event, you will find the most comprehensive record over at the Transition Network’s conference feed.  What I am going to share, with links to some of the key pieces of media from that feed, is some of the notes of my reflections at the end of the conference.  As the event drew to a close, I went around and asked people for their brief reflections on what they saw as the character unique to this conference in comparison to others.  Three words came up again and again, deepening, focus and maturity. 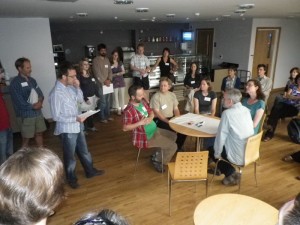 The Fishbowl discussion on "scaling up".

In terms of my personal highlights, firstly there was the moment on Sunday night when Ben Brangwyn told me the international Transition hubs were “on fire”, and had really clicked in working on a productive way forward with their work.   There was the moment in the Fishbowl activity about ‘scaling up’ and the role of social enterprise in Transition, where someone asked whether it might be possible to imagine an awareness-raising programme as an enterprise that could help support a Transition initiative.  It is not a question I have any answers to, but it is also certainly not a question we’d have heard anyone asking two years ago or even a year ago.  I think we have seen a new level of maturity around social enterprise.  I think that also, in the processes we have held, and also just in the way the whole event was run, we have seen the deep and very practical integration of the ‘inner Transition’ piece which Sophy has fed in so strongly over the last few years. 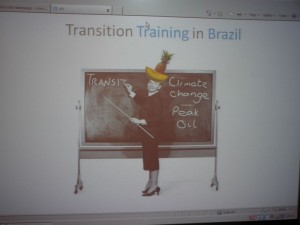 The opening slide from the presentation about Transition in Brazil, showing how they approach Transition with a unique Brazilian twist!

One delight for me is that this year’s ran so smoothly and well that I actually managed to get to some of the workshops, which was a first!  The workshop on local currencies wasn’t so much about what they are, but was very detailed discussions about how to get started, and how to learn from the pioneering projects that have gone before.  Another highlight for me was the workshop about Transition in Brazil, where one of the speakers mentioned that her group holds regular “Solidarity Exchange Fairs”, where people bring things to swap.  “We exchange everything apart from husbands and dogs”, she said, adding that if someone does bring her husband along to give him away, they say “well if you don’t want him, why would I want him?!”

Every Transition Network conference has its emerging edges, the areas that feel new and uncomfortable but which demand deeper exploration.  My sense for this year was that those edges were around Transition and activism, the need to be starting to create livelihoods for people, and the  need to deepen international networking.

One of the things that was also clear over the conference was that there were people from initiatives on a range of scales, from the very small to the much larger, and it is important to value the challenges and opportunities of both.  For those smaller groups, it is important, even though it can feel as though not much is happening, to keep those fires burning and to keep doing what you do.  You never know when tipping points will happen, they can occur at the most unexpected times.  Even though it might feel that you are not having much of an impact, you never know where those impacts might occur. 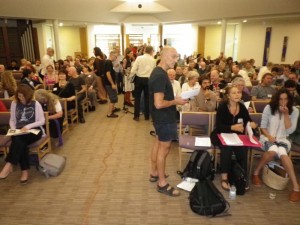 Preparing for the opening of the first session, Saturday morning.

When I lived in Ireland I taught an evening class every Thursday evening at University College Cork on permaculture.  During one class, a man asked me “how many people do you think do this evening class?”  “22” I told him, the number of the people sat in the room in front of me.  “Ah, no”, he told me.  “I’d say it is way more than that.  Every Friday morning I’m at home in my garden and at least 20 people stick their heads over the fence and say “what did he teach you last night?”

An article in the Guardian last week asked “has the green movement lost its way?” I think that is the wrong question.  The right question should be “has a new, emergent culture which embraces resilience and localisation, equity and partnership, even scratched the surface of its potential?”  I think the answer is a resolute no.  We’ve all had a taste of that this weekend.

In Naomi Klein’s ‘The Shock Doctrine’, a book which grows more prescient with each month that passes, she quotes Milton Friedman, one of the key architects of neo-liberal economics.  The quote is:

“Only a crisis—actual or perceived––produces real change. When that crisis occurs, the actions that are taken depend on the ideas that are lying around.  . . That, I believe, is our basic function: to develop alternatives to existing policies, to keep them alive and available until the politically impossible becomes politically inevitable”.

Over this conference we have had, for the first time I can remember at a Transition Network conference, a tangible sense of how this relates to Transition.  We have heard how in one town in Brazil which was hit very hard by floods last year, is using Transition principles and processes in designing the process by which it rebuilds itself.  We heard how during the recent ‘Spanish revolution’, where the main square in Barcelona was turned into a huge protest camp for several weeks, Transition thinking was what many people brought to the situation.  We have also been hearing about how in New Zealand in some places hit by earthquakes, the work done prior to that by Transition initiatives proved to be extremely useful in terms of building community resilience.

From these, we get a sense that we are now in the times we have been talking about for some time, that Transition is already in the DNA, in the drinking water, and is already informing how people respond to crisis.  It is extraordinary to see that, and for it to have emerged in less than 5 years. 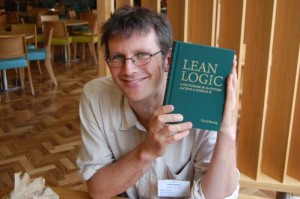 One of the great joys of this conference has been to finally get copies of the book David Fleming, who is much missed this year, and who always attended these conferences, was working on when he died, ‘Lean Logic’.  The book contains a section I hadn’t seen before in the various drafts I had seen of it, which focused on Transition.  It contains this beautiful quote, which forms a fitting last gift from David to everybody here:

“The change in direction represented by the Transition movement is as profound as any intentional change experienced by a civilisation”.

It is worth reading that twice, and letting it sink in. 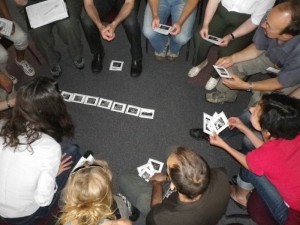 Playing with the 'Transition ingredients' cards at the Saturday workshop (more on this tomorrow).

So I am deeply grateful once again to have spent time with this extraordinary movement of ordinary people doing extraordinary things.  Personally I go away with three big to do’s.  The first is to finish ‘The Transition Companion’ because I think you will find it an extremely useful resource in doing this work.  The second is to develop the ‘Ingredients’ card game that we played with in my workshop as I think it is a tool you will find very useful.  Lastly, we’ll continue the work on REconomy and on trying to set up a revolving loan fund so there is some actual investment into these emerging projects.

Fabulous summary : its sounds so exciting
I’m only sorry that Fitzrovia Transition has
gone into obeyance for the time being,

Thanks for this Rob – I’ve been sorry to miss my first conference, but have realised that actually it’s my first chance to follow a conference online! Thanks to everyone who’s been getting the videos, blogs etc out there.

That picture of you with Lean Logic makes me very happy 🙂

[…] the Transition Network just concluded its 2011 conference in Liverpool. Co-founder Rob Hopkins wrote up his reflections on the conference in a blog post yesterday, and included a response to Rustin’s question: An article in the […]

Hi Rob
I emailed you via the contact form a little while ago, some questions I had with respect to the ‘In Transition’ video. It may have got lost in a filter.
Did you receive it, I hope that you will be able to reply, I have also emailed Emma Goulde but as yet no reply. I think it has some constructive criticism that would benefit the transitions 2 video
Best Regards Barry

Hi Barry… I haven’t received anything… you could email me at rob (at) transitionculture.org.