Let’s start this month’s round up in Derbyshire, where Melbourne Area Transition have received planning permission to install 48 PV panels on the roof of their local 12th century church, and there they now sit, in their energy-generating splendour.  Here’s a short film made by Chris Bird (author of the Transition book ‘Local Sustainable Homes’ who blogs here) where MAT’s Graham Truscott gives him a tour of the roof.

In a second video, Chris and Graham get in off the roof and talk in more depth about how the scheme came into being, and the obstacles it overcame:

TT-Llandeilo in Wales are fighting to save their historic Market Hall while plans are being considered for a new Sainsbury’s supermarket to the north of the town – read more in This is South Wales.  Picking up a story from last month’s round up, which was explored in more detail in the last Transition podcast, here is an article in Treehugger on TT-Whitehead planting 60,000 trees which includes their fantastic video that we featured here last month. 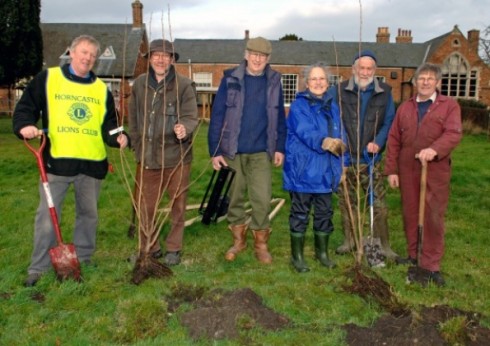 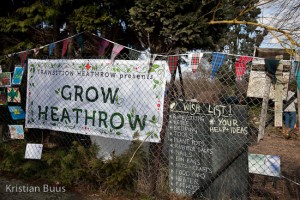 On the same subject, TT-Horncastle in Lincolnshire have been planting hazelnut trees (see above) as part of their plan to have an orchard spread around the town. Ian Westmoreland from Transition Heathrow (see right) came to give a talk in Totnes to talk about their Grow Heathrow project, which explored the place where Transition and activism meet. 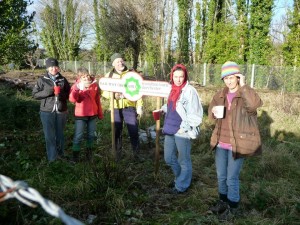 TT-Bridport has joined forces with another local community group and have offered placements to unemployed young people to teach them practical skills.  TT-Dorchester and TT-Taunton in Somerset both held a Wassail at their local community orchards (see left)! Dorchester’s was followed by an orchard work day.   For those not familiar with the term, an orchard-visiting wassail refers to the ancient custom of visiting orchards, reciting incantations and singing to the trees in apple orchards in cider-producing regions of England to promote a good harvest for the coming year.

TT-Bolton have written this rational and forward thinking letter to their local council with 2 specific objections and 2 specific (and they believe achievable) aims for the next 14 year period.  At the end of the letter they refer to two articles which may be of interest, here and here.

So, to London.  Here is a very silly indeed video of Transition Crystal Palace: 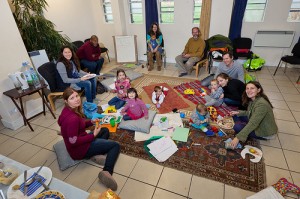 Transition Town Tooting met to make some Transition New Year resolutions.  TT-Brixton have started a Family Group (see right) where everyone is welcome (everyone is part of a family in some way)! Read here for more details of their planned activities.  Transition Brixton’s Brixton Pound initiative also got a mention at the recent Davos Economic Summit!  Have a look a 4.30 into this interview with Stewart Wallis of nef:

While we’re on the subject, the Bristol Pound, the first city-wide complementary currency is coming soon, keenly supported by Bristol City Council.  You can keep up to date with developments at their rather impressive new website. 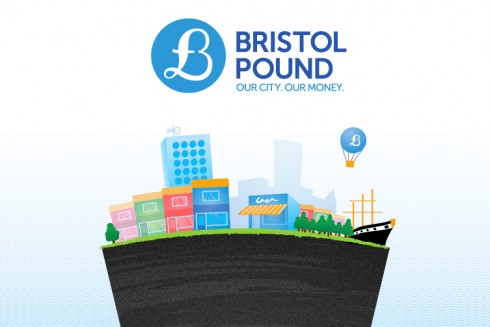 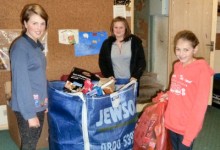 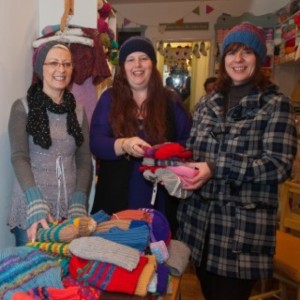 TT-Shrewsbury have also been busy as part of The Shrewsbury Hydro Group who are spearheading the new £100,000 power plan for Shrewsbury Castlefields weir (a story we heard about in a special podcast in December).  A lovely example of skills being shared for a good cause as TT-Worthing took part in a Winter Warmer campaign by knitting woollen hats, gloves and scarves for two local charities (see right).

Here’s a great idea: Transition Cardiff have started ‘Show and Tell’ evenings, where people from different sustainability initiatives in the area are invited to come and present what they are up to.  Here’s a film about it:

The Local Energy Assessment Fund (LEAF), run by the Department of Energy and Climate Change (DECC) recently announced 82 winning communities, who between them shared £4 million for community energy projects.  A quick look through the list of finalists shows that about 10 of them were Transition initiatives.  Among those, Transition Town Totnes got funding to retrofit Dartington Parish Hall, Transition Eynsham Area are now able to insulate local homes, Taunton Transition Town can now do some research on the best ways to reduce energy in Taunton, and Transition West Bridgford will be rolling out its ‘EcoHouses’ project, to name just a few. 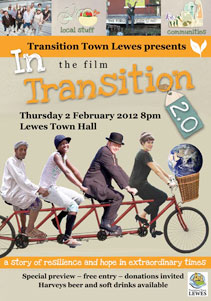 Internationally, the Transition initiatives that feature in the new film ‘In Transition 2.0’ are getting ready to preview the film tomorrow (Thursday 2nd February).  Transition Town Lewes are showing it in the town hall, and didn’t like Transition Network’s poster and so made their own (see right), Transition City Lancaster are showing it at Dukes, Transition Marsden & Slaithwaite are putting it on at the Watershed, Transition Monteveglio have had to cancel theirs due to arctic winds and snowstorms, Transition Wayland in the US are using the town building, Love Lyttelton in New Zealand will be showing it in their office, in a fire station in Moss Side, Manchester, in a Hindu Temple in Tooting,  in a school in Finsbury Park, in a hall in Koganei, Japan, in ‘Cinema Paradiso’ in Auroville, India and in Aldeia das Amoreiras Sustentável in Portugal.  Its premiere will be announced soon, and it will be more widely available for screenings from the end of March.

Popping over to British Columbia in Canada, a Shuswap resident (what a great name for a place) is interviewed about why she became involved in Transition in this lovely Salmon Arm Observer article (Salmon Arm, there’s another great name for a place!).  See also this related article on Ten Resolutions for Resilience.

Also in British Columbia, local resident and farmer Matthew Stewart (see below) has taken the first steps in getting a local Transition initiative up and running in the city of Burnaby which sits to the east of Vancouver. Read a Q&A with Matthew in Burnaby Now. 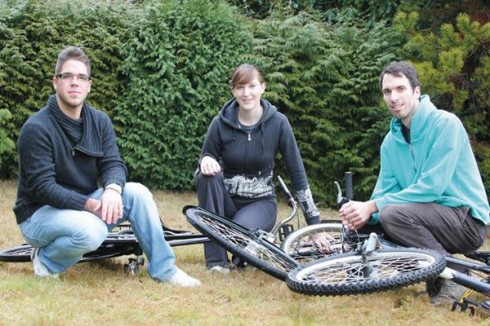 TT-Woodstock is one of only two Transition groups in the East Canadian province of New Brunswick.  The group have built a solar-powered cooker that’s used at public events such as Canada Day, compiled a local food directory and established a community garden. They continue to actively encourage more local people to join them.

Heading south to the US, you can check out the US edition of the January roundup here.  From Massachusetts, this simple Resilience Questionnaire put together by The Jamaica Plain (JP) New Economy Transition seeks to find out direct from their residents just how ready their JP community is for change.  Also in Jamaica Plain, for their first Potluck of 2012, local residents Jenny Jones, Alvin Kho and Andree Zaleska shared their respective experiences of the Festival Garden, Egleston Community Orchard and the JP Green House.

A Senior center in Chelsea, Michigan is to host series of free classes on resilience, sustainability and the transition movement and kicks off with a program on “Chelsea’s Resilience 100 Years Ago.”  In North Carolina, in Chapel Hill, the first Transition Congregation sustainability workshop in the US has taken place with Transition Trainer Tina Clarke.

In Wyncote, Transition Cheltenham have started a Sunday Supper series with an excerpt from the film Gasland followed by a speaker and discussion about fracking.  Also in Pennsylvania, the Penn State Center for Sustainability did this review of The Transition Companion and held its second energy forum, ‘Marcellus Shale and Beyond’ which sought to answer questions such as ‘Why do we need our own energy plan?’ and ‘Who is going to fix a growing list of intractable problems?  Government?  Business?  Academia?’ 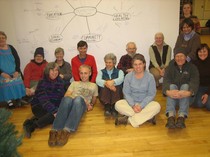 In Utah, Transition Salt Lake City held a meeting at a local church to showcase their website, take part in a mind map exercise and share a potluck meal (see right).  Following a “Training for Transition” in December, Dummerston is the 9th town in Vermont to start up a Transition initiative and this month held a potluck dinner, a screening of In Transition 1.0 followed by a discussion.

The spread of Transition in Brazil continues apace.  May East sent us the following reports of two particular recent developments there:

Transition Ametista: Town of 150,000 people, the largest Amethyst mines of South America. The town today stands over a Swiss cheese as they have been digging the subsoil for decades.  Recently they have been influenced by brilliant Brazilian permaculture designers friends of ours and decided to diversify economy, close the loops of extraction, created factory of eco-bricks, went back to grow grapes & vinyards, decided to age wines inside of the amethyst caves… a great case study. 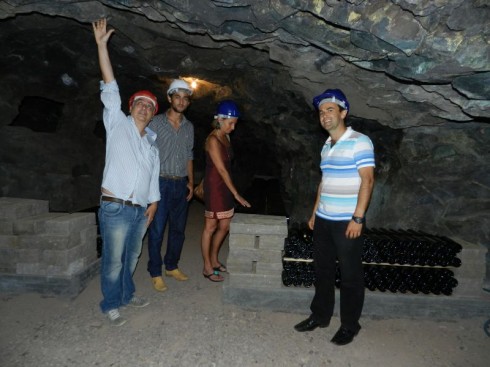 We were hosted by the Major and had many reps of LA of the regional towns.  Marcello co-facilitated with me (see photo below). 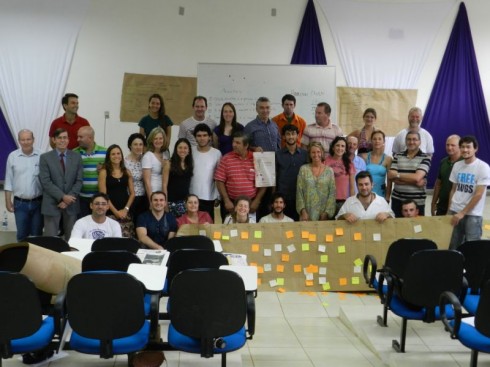 Transition Rio – Rio has now many initiatives.  This is the third year; third group and I trust one of our trainers who is visiting the UK at the moment will be able to present all that is happening. Transition Brazil is planning a 2 day conference during Rio+20.

That’s it for now.  The next podcast, telling more about some of these stories, will be out in a couple of weeks.  If there are any stories you would especially like to hear more about, please let us know via the comments box below.

TTK2K have now got five videos on the draught busting theme. You have uploaded part 2, and part 3 twice. They are all now clearly annotated “part 1 of 5” , “part 2 of 5” etc so they will be easy to upload correctly.